・A Historic wooden inn built in 1926
・Dinner is fresh seafood purchased from the market by the owner
・Standard plan starts from ¥23,000 for 1 night with 2 meals

A well-known inn that stands quietly in a fishing village

At the end of the peninsula in Aichi Prefecture, there are many places which seem like they are run down and have nothing there,
but in reality they are worth paying a visit just to stay in their ryokans.
Amongst the rows of old houses standing side by side in a fisherman village, a wooden inn full of charm suddenly appears.
This is the Japanese-style inn, Kakujoro. 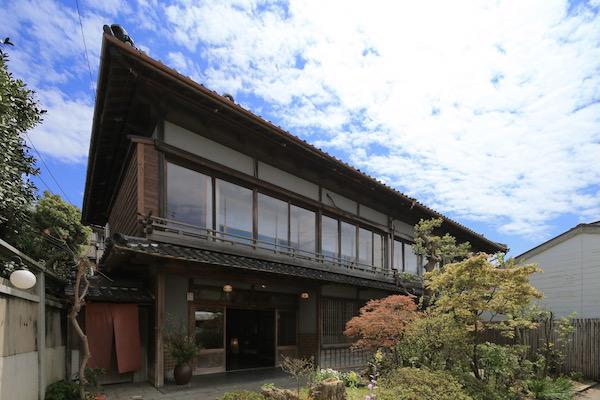 Visitors are first surprised by this wooden building’s impressive exterior, with a spacious entrance, high ceilings and even a tower.
Buildings from the early Showa period are full of charm Established in 1926, the first year of the Showa period,
the Atsumi Peninsula developed as a major shipping port.
During this period, Kakujoro was built as a place for wealthy and rich people to gather and enjoy themselves,
and it is said that it was a licensed red-light district until Showa 33 (1958).
Now, it is purely a Japanese-style inn where traces of that time can be found. 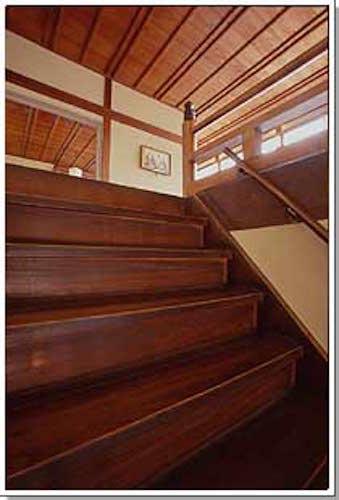 When entering, the first thing you see is a large staircase 2m wide which looks as if it has been made from a single plank of a Zelkova tree.
You will surely be impressed how no expense has been spared, and such luxury typical of Japanese houses can definitely be seen at Kakujoro.
The stairs and floor also shine despite their age, showing how they have been cared for over the years.

Although the fundamentals do not change, evolution continues

As becomes clear after several visits to this inn, its special trait is that it continues to evolve while remaining an old building.
For example, there is a new, modern lounge just past the entrance. 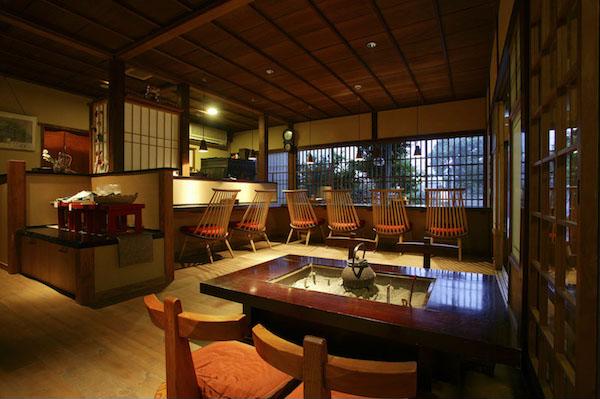 Although it was formerly the front desk, in 2005 it was reborn with a more modern style.
This is where check-in takes place.

Which room should we stay in?

In total there are 10 rooms available; 5 in the main building, 2 in the Unjoro tower, and 3 in the Suijoro tower. 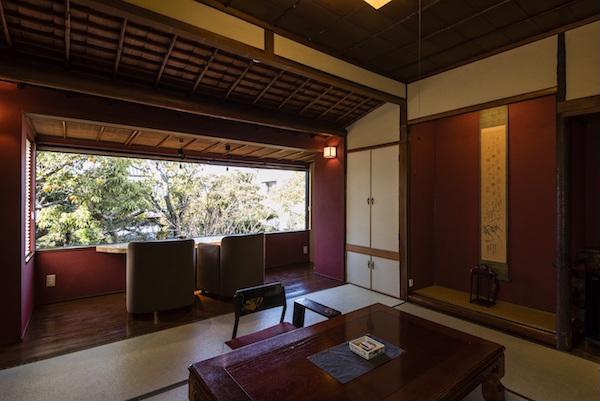 Although each room is different,
if you want to enjoy the style of a Japanese ryokan then the Matsu:‘pine’ or Take:‘bamboo’ rooms in the main building are best as the other rooms all have beds to sleep in. 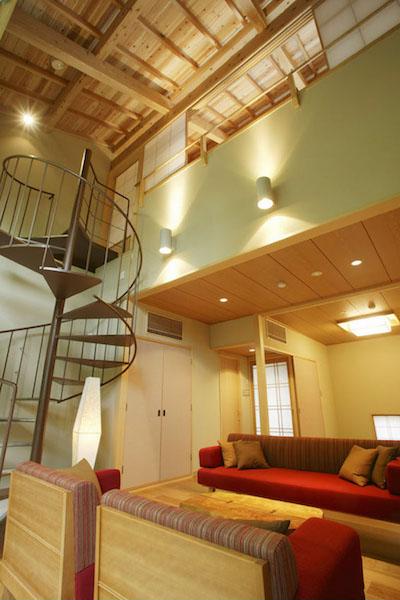 For those who want to relax and take in the atmosphere of the inn,
the terrace on the second floor of the main building is perfect and has become a space where you can really experience the taste of good old Japanese houses, even in an inn. 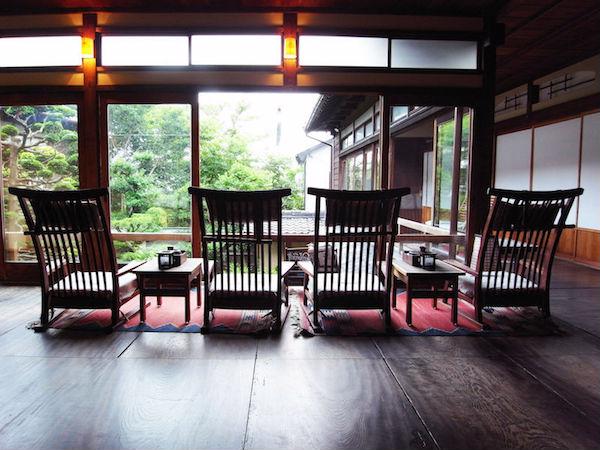 Here you will want to relax in a chair placed by the window while appreciating the feel of the floor which has been made using large planks of wood.

Meals are served in the restaurant which was refurbished in 2016 with 10 counter seats, 14 table seats and 8 private seats,
adding up to 22 seats in total. As the table and counter seats face the garden, it is also possible to look out into the garden while dining. 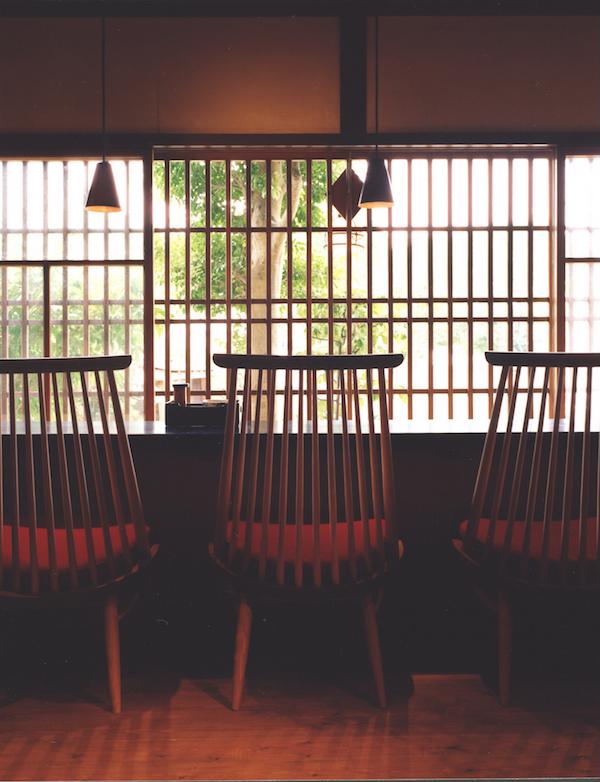 As there is an evening light up, aim to eat during this time so that you can dine while enjoying the beautiful scenery of the garden and buildings lit up.
Every day at dinner, the owner serves fresh seafood dishes that he has purchased from the local market. 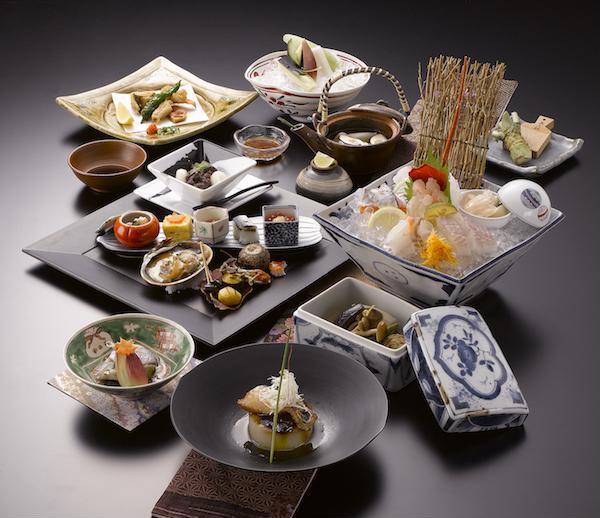 The standard course has 10 dishes and are made using rock oysters, large clams, conger pike,
Japanese halibut and other ingredients which are found in an abundance in the Enshunada Sea.

But it is not just the seafood that is good, locally sourced Atsumi beef and pork are also delicious.

Mineral water is used in baths with outstanding views

Guests are allowed to use the public bath in the annex.
It has an outdoor bath attached to it and is on a hill so that guests can enjoy a peaceful, countryside landscape or even watch the milky way in the distance. 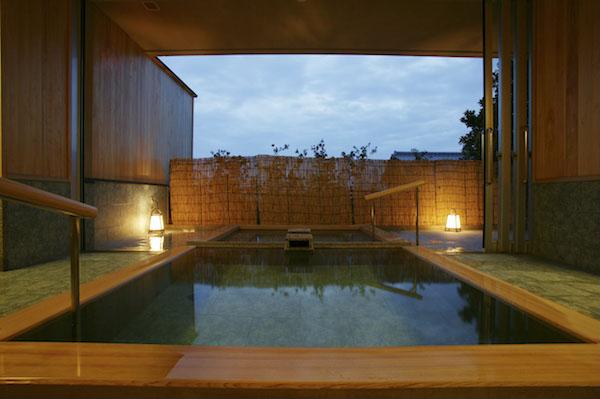 Hot water is pumped from the Tenryu river that flows underground about 150m beneath, and although it is not a hot spring,
the water is soft and feels great.
This is an inn where you can taste the Showa era of good old Japan.