Miyamoto-ke: A 200 Year-Old Farmhouse and Owner is an ex-sumo wrestler!

・ The owner is ex-sumo wrestler, Tsurugidake
・ A ryokan which was used as a private residence for 200 years
・ A newly installed sumo ring bath in 2017!

Combining sumo and old houses, this hot spring inn is the place to enjoy Japan to the full

It can be said that there are 2 special characteristics of this inn, which are
1) guests can stay in an old-fashioned farmhouse and
2) the owner is an ex-sumo wrestler! 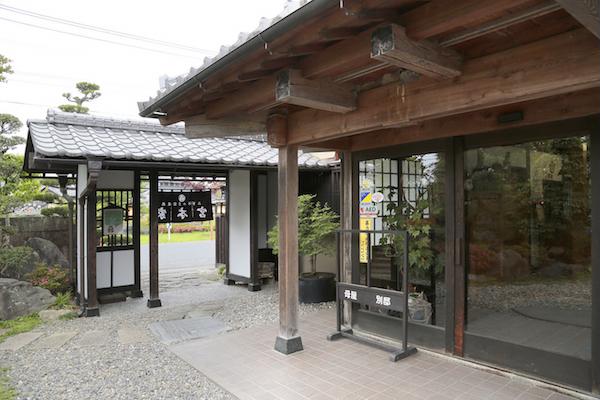 The owners of this ryokan, the Miyamoto family, have been successful farmers in this area since about 250 years ago.
The current owner is the family’s 12th generation, and was also a makuuchi sumo wrestler known as ‘Tsurugidake’. 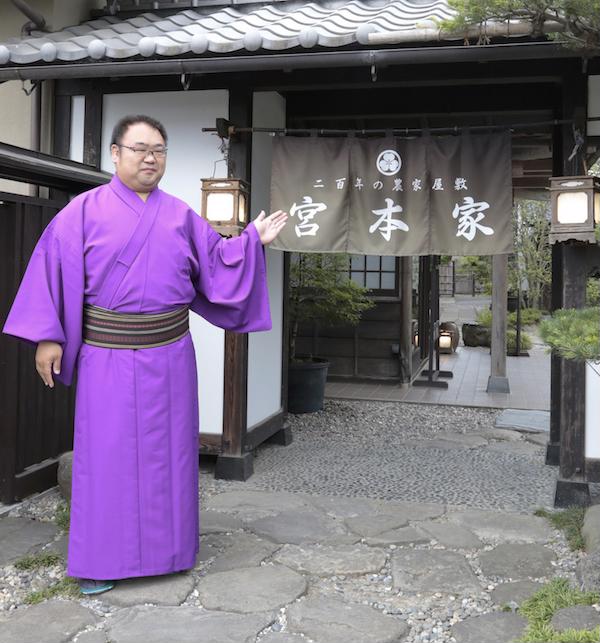 The inside of the building is decorated with sumo goods.

Which would you choose, the main building that was built 200 years ago or the separate villa made by a carpenter? 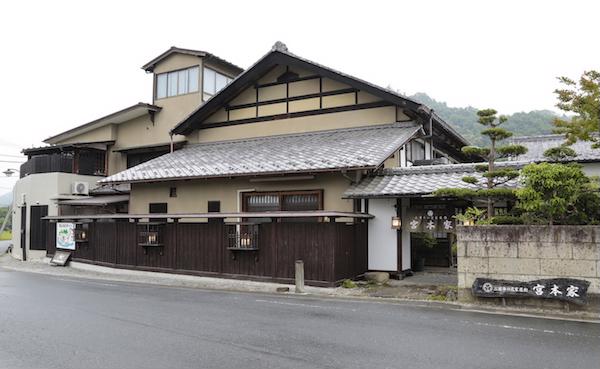 It seems that the second floor was originally used to keep silk worms, but now it is used as a guest room.
The separate villa is an extension that was completed 7 years ago. 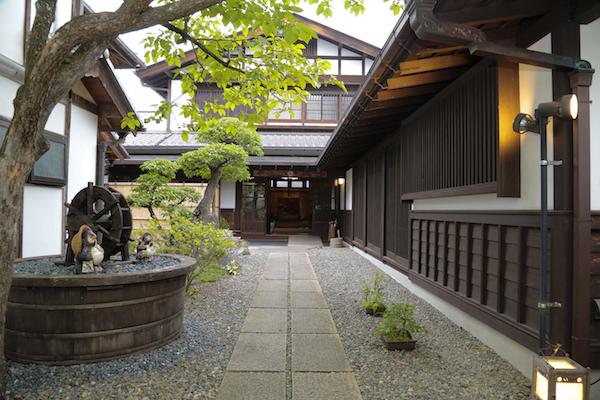 Built using timber from Hida in Gifu prefecture,
it was made by the hands of a ‘Miyadaiku’, a carpenter who uses traditional Japanese building techniques.
The most reasonable room is the ‘dodome no ma’ in the main building with prices starting from ¥13,000 for 2 rooms sized 10 tatami mat and 6 tatami mat
(one night with 2 meals, up to 2 people, separate bath and toilet). 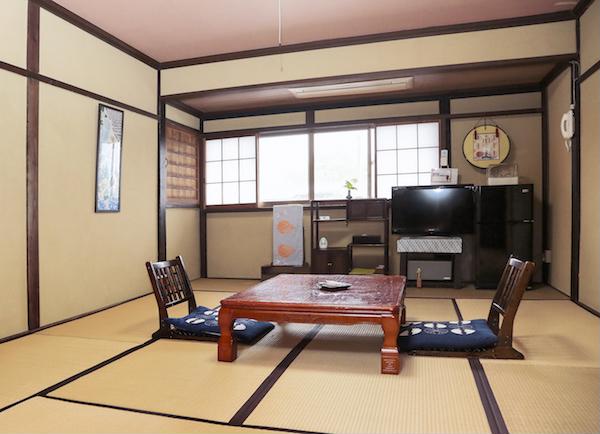 On the other hand, the separate villa is slightly more extravagant with a private toilet and an attached outdoor bath,
which is not a hot spring but rather heated water. 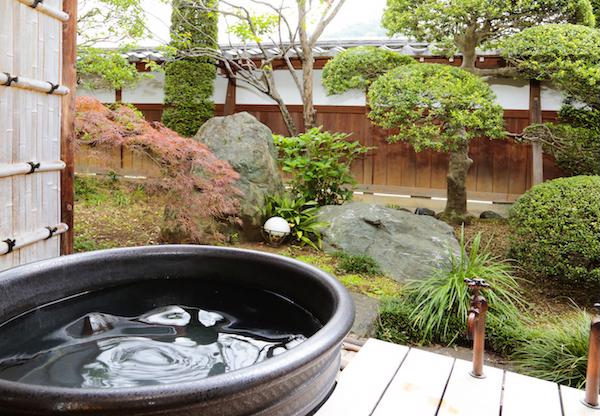 As an example, prices for the ‘Yome no ma’ room start from ¥20,000 for 1 room measuring 8 tatami mats with an attached outdoor bath and a toilet
(one night with 2 meals, up to 2 people).

The bath water comes from a sulfur spring and has a slight sulfur smell to it which is unique to Chichibu.
There are 4 types of bathtubs that anyone can use and when visiting a hot spring ryokan,
it is recommended that guests use the baths as much as they like, so it is great to have such a variety.
The separate villa also has a large, spacious bath which can be reserved and used by up to 5 or 6 people at a time. 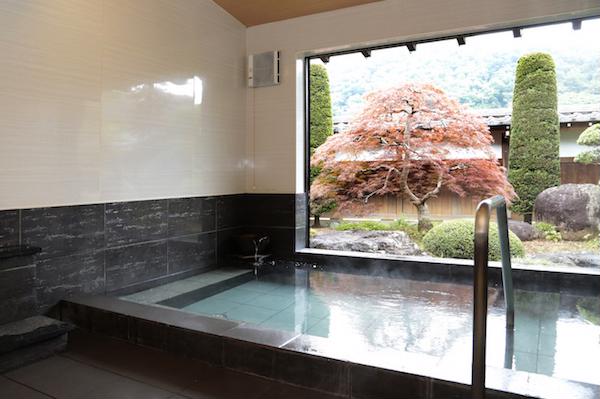 The cauldron bath is a cauldron measuring 1.5m in diameter and heated with firewood.
As there is no place to wash, it is best to enter here after using one of the other baths first. 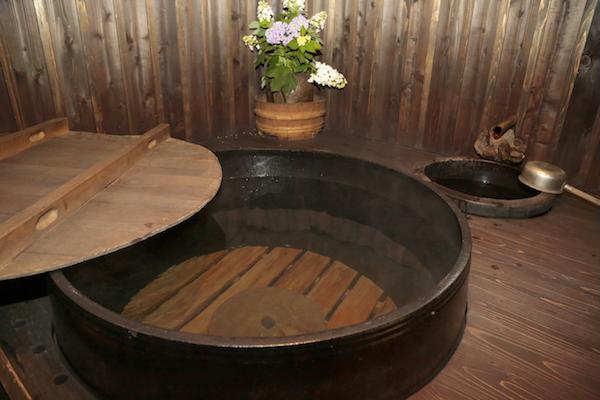 There have also been instances where temperatures have risen too high if nobody has entered the cauldron for a while.
If this is the case, control the temperature by taking some of the water from the nearby pot and putting this into the cauldron.
This water is also from the springs, as those found in Chichibu are cold mineral springs.
The ‘Sumo ring open-air bath’ was also opened in April 2017 and is in keeping with the style of the inn. 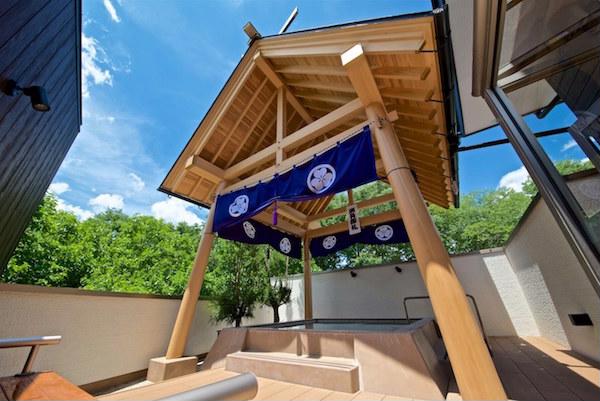 Dinner is a meal served from the fireside.
Japanese fireplaces known as ‘Irori’ have been built into both the main building and the separate villa,
but if the number of people staying is small, then it is possible that everyone may eat dinner together around the larger fireplace in the villa. 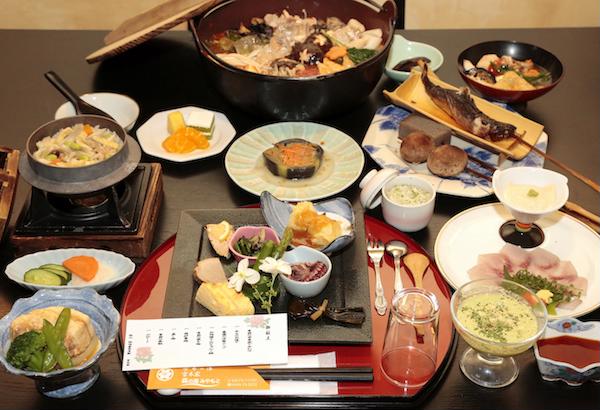 Although the meal served changes depending on the season, there are usually around 10 dishes.
The inn also tries to use the vegetables from their farm as far as is possible.
But when all is said and done, the main feature of the cooking is a chicken soup chanko,
based on the recipe of the ‘Musashigawa Room’ which belonged to the head of the family. 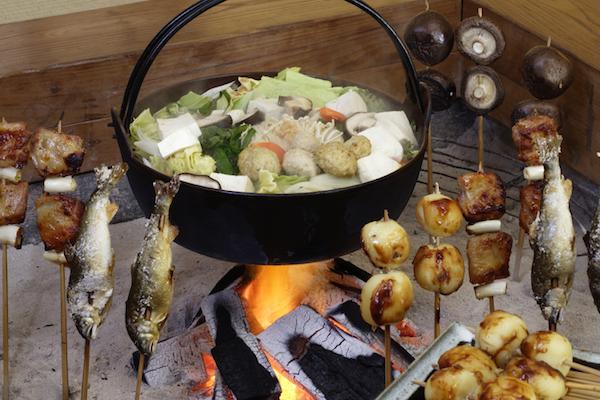 Your chopsticks won’t stop once you get a taste of the delicious flavors of the home grown vegetables that melt into a healthy soup which has been cooked for half a day and is full of collagen.
Be careful though, or you might end up the size of a sumo wrestler yourself!
They also serve grilled fish (Trout and Ayu) and vegetables baked in the fire.
Cooking with charcoal not only has a better smell but also makes the food even more delicious.