Mount Nokogiri (Nihon-ji): From Hell Peek to the 30m Kannon, this is an amazing place

・This temple is full of highlights including “Hell Peek” observation deck, the Hundred-shaku Kannon carved into the rock face, industrial heritage sites and a Great Buddha statue
・A sightseeing spot with great access from Tokyo
・A treasure trove of beautiful sites that will give you plenty of pictures to be proud of

Qlip Like Read
Mount Nokogiri in the Boso Peninsula was once the production center of Boshyu stone and after it had been cut,
the mountain was left with an area shaped like a saw and so it was called “Saw Mountain”, or “Nokogiri yama” in Japanese.

There are 3 access routes available including a ropeway, a toll road and a free road.
The ropeway is ¥930 for a round trip and reaches the top in 4 minutes, while the toll road costs ¥1000. 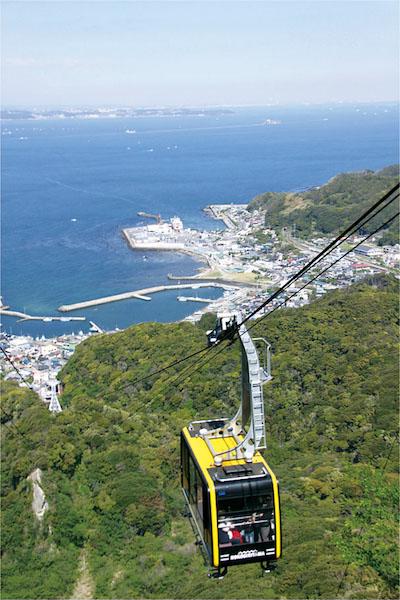 As there is not much difference in price, the ropeway is probably the best route for travelers.

Is this central Asia? The surprise of the Hundred-Shaku Kannon

When reaching the site via the ropeway, pay the admission fee at the west gate and enter.
Aim for the summit first, and after walking for about 10 minutes, you will see the “Hundred-shaku Kannon”.
(Handred-shaku means 30m) 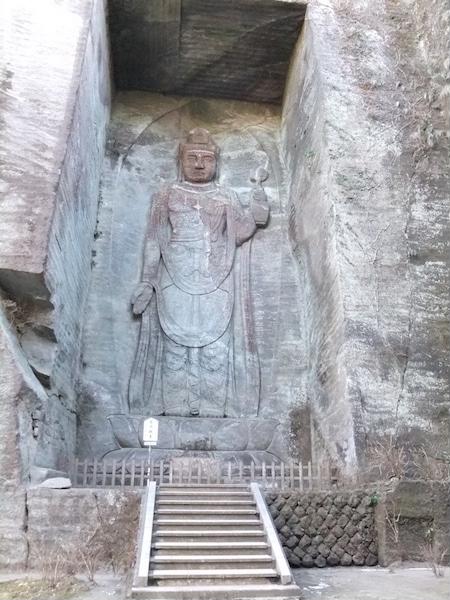 After the Boshyu stone had been cut out of the cliff, this figure of Kannon reaching nearly 30m in height was carved into the rock face and took 6 years to complete.
Here it feels like being lost in a historic site in middle Asia.
From the Hundred-shaku Kannon area, if you look up to the left towards the summit you will be able to see a rock that protrudes outwards.
That rock is an observatory known as “Hell Peek”. 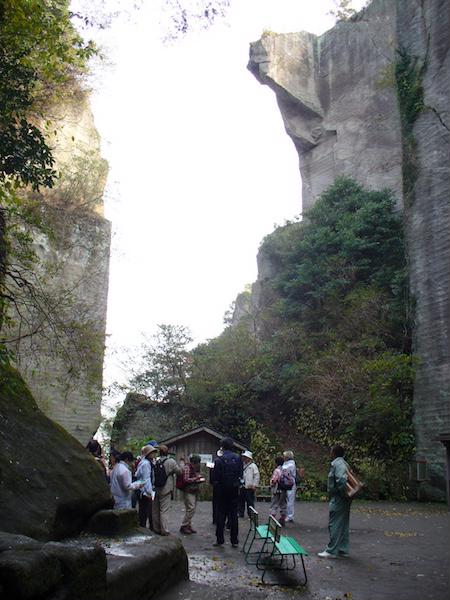 Although you may want to head there straight away, there is one other place that you should see first.

The Wall of Laputa: A Popular Hidden Spot

Head through the north entrance gate just ahead of the Kannon engraving (show your ticket to re-enter) and climb down the mountain a little.
From the side, you will be able to see the remains of a stone cutting quarry.
Here you can see what looks like city ruins floating in the air which is known as the “Wall of Laputa”,
named after Miyazaki’s anime and not after the novel, Gulliver’s Travels. 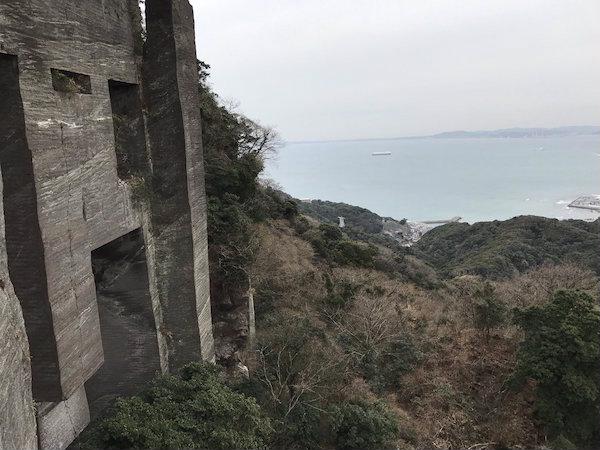 Now that we’ve taken some good photos, let’s head back up to the summit!

10 minutes from the Hundred-shaku Kannon and you will reach the summit which offers a 360-degree panoramic view!
From the Pacific Ocean in the east to Mt. Fuji over Tokyo Bay and the Sky Tree in the west, here you can enjoy a spectacular view. 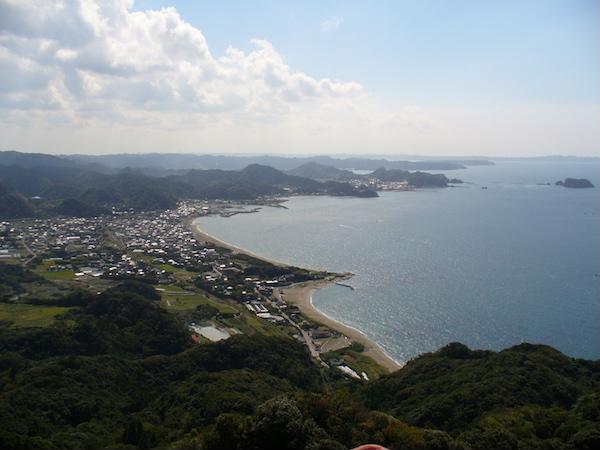 Now you will be challenged by the main event, Hell Peek.
Hell Peek protrudes out over the cliff and is believed to have been made by a stone craftsman with a playful soul,
who left only this rocky corner when cutting out the stone.
The craftsman was truly skilled to have been able to create such a popular tourist spot. 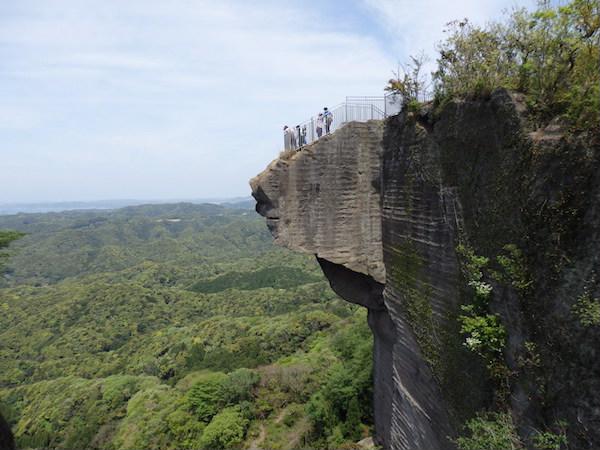 Looking down is scary, but if you keep going to the edge and look out, you will see Tokyo Bay spreading out in front of you.
It is a wonderful feeling.
This is a great photo spot, but if you take it from behind, it is hard to portray just how awesome the experience is,
so we recommend taking it from the mountaintop observation deck on the left hand side which faces Hell Peek. 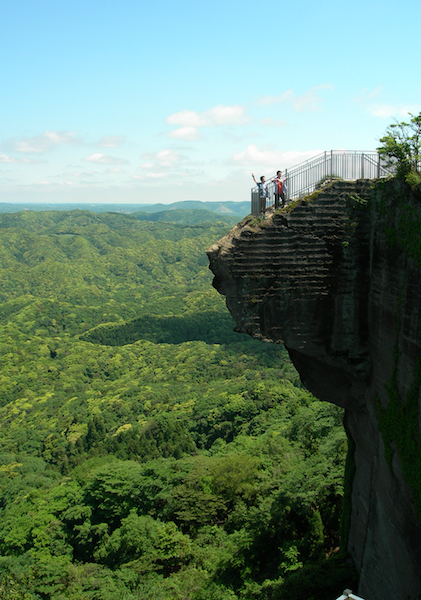 This is the angle you will get.
When taking it, you can make it look like you are floating by cutting off the cliff wall on the right.

After you have finished at Hell Peek, head down another route towards the Great Buddha statue, roughly a 10-minute walk.
This Great Buddha is nearly 31m in height, while Nara’s is 18m and the one in Kamakura is 13.4m, giving you an idea of just how big it is. 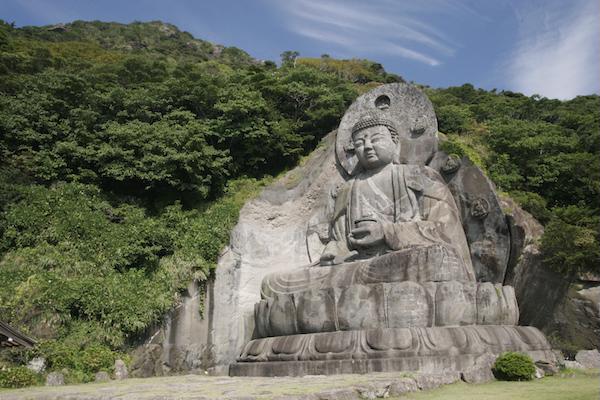 It is claimed to be the largest Great Buddha statue in Japan that is made of stone.
Amazing.
Mount Nokogiri is a great place to experience extraordinary magnitude.