Salmon from the Miomote River have a unique taste

Murakami City in Niigata is famous for its rows of townhouses and Hina Matsuri (Doll Festival) celebrations,
but the salmon fishing in fall is also a sight that is not to be missed.
In October, as it turns to the season when the cold north wind blows in from the Sea of Japan,
fully-grown chum salmon return to the Miomote River that flows through Murakami.
For the people of Murakami, these salmon are a regional treasure.
The citizens are restless with excitement as the entire city awaits the arrival of this season.
And the salmon fishing begins. 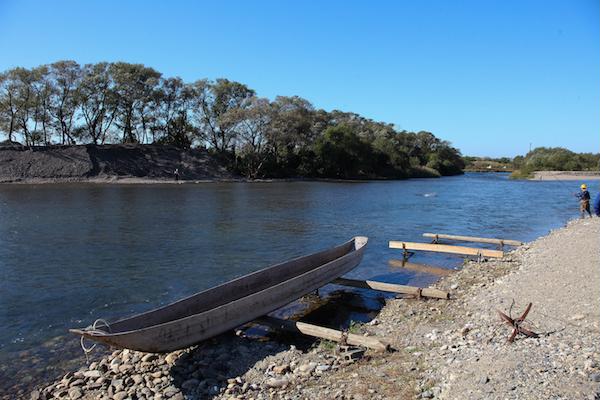 There are many different types of fishing methods,
such as ‘urai’ which involves setting up a fence to catch the salmon as they head upstream,
and ‘tenkara fishing’ which uses a tenkara fishing rod with 3 hooks.
However, the most fascinating method of all is the ‘iguriamiryo’. 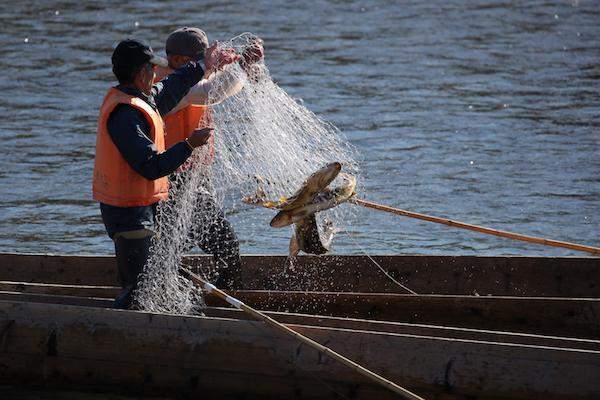 This simple and traditional fishing method catches the salmon by manipulating a rod and net from aboard 3 small, wooden boats.
Although this method is not overly extravagant, it can be said that this is the symbol of the relationship
between the people of Murakami and the salmon.

Iguriamiryo is a traditional fishing method that has existed in this area of Japan since the Edo period (1603 – 1868),
and takes place annually from the end of October to the end of November.
This method of fishing places a net between two boats whilst another strikes the water’s surface to drive the salmon into the net
as they head upstream.
The largest that the boats measure is a mere 5m in length.
Two people ride in one boat, which they row by hand so as to avoid surprising the fish. 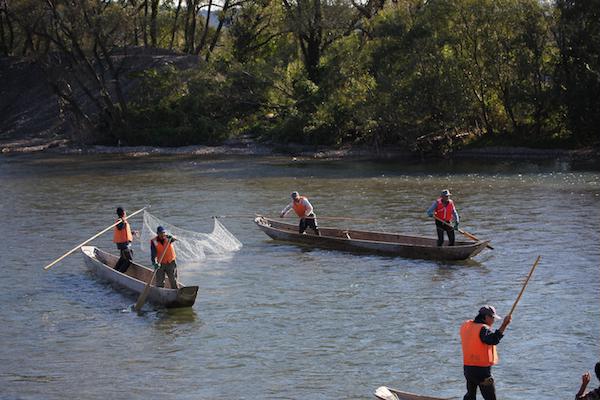 I was once allowed to ride along for an interview, and because the boats are long and narrow, they shake.
Standing up to move the net and bring the salmon onto the boat requires quite some skill and technique.
The fishing takes place at set times, from 09:00 – 10:30 on weekday and Saturday mornings,
and twice on Sundays from 09:00 – 10:30, and 13:00 – 14:30.
During those times, the boats make countless journeys back and forth along the river to catch the salmon.
For those who would like to watch, the mornings are best as this is when they seem to catch large amounts of salmon.

And for those who want to watch?

The departure point for the boats is in front of the Miomote River Salmon Fishery Association’s Third Hatchery.
Parking is available, so we recommend stopping here to watch.
Or, on the opposite side, there is also a quiet road that runs along the river, so you can wander over to that side and head down the riverbank. 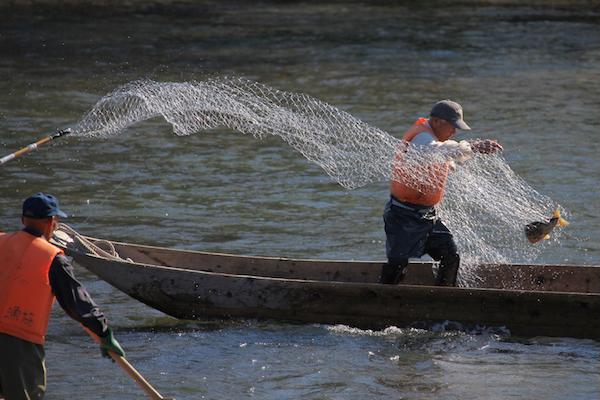 Around the area where the fishing takes place, the Miomote River flows from east to west and so the easiest place to watch from is the right bank.
The left side tends to be backlit by the sun, so this can make for some impressive photos.
When there are many fish, up to 50 can be caught in one haul.
The best time for catching the fish is from the middle to the end of November. 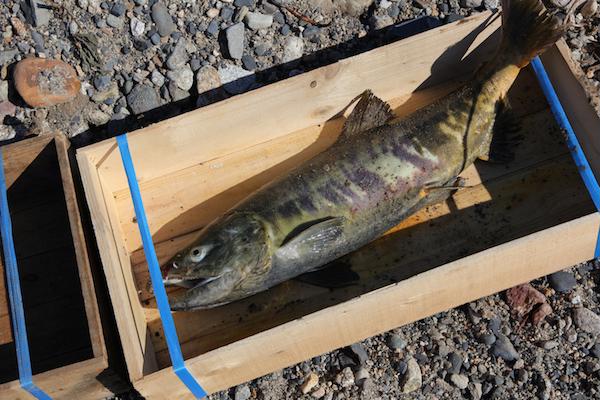 Also, the salmon that is caught is sold directly at the Salmon Fishery Association’s shop located in the third hatchery.
In general, the males cost around 2,000 JPY while the females can cost between 2,000 and 3,000 JPY, as they also have eggs.
However, raw fish might not be practical for travelers to purchase and so I will only mention this briefly.
For souvenirs, I recommend the dried salted salmon.

In Murakami, salmon is known as ‘ioboya’ and has a special existence for the people of the area.
This special relationship between the people of Murakami and the salmon began in the Edo period.
It started with a samurai from the Murakami Clan, called Aoto Buheiji,
who was the first in the world to notice the recurrent appearance of the salmon, and who facilitated the increase of salmon in the Miomote River.
Thanks to this, the number of salmon that the Murakami clan caught was dramatically increased, enriching the people's lives. 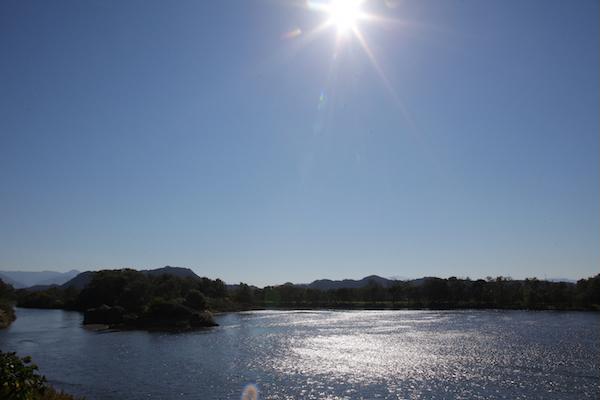 It is because of this that the salmon have been carefully protected and fostered by the people of Murakami.
It can be said that the relationship between the city of Murakami and the salmon has a big impact even today,
as the traditional fishing technique of iguriamiryo continues to be protected and passed on.

From head to tail, they eat the entire salmon in Murakami.
There is also a variety of cooking methods and there are believed to be over 100 types of recipes.
Among these dishes, the salted salmon is the most popular. 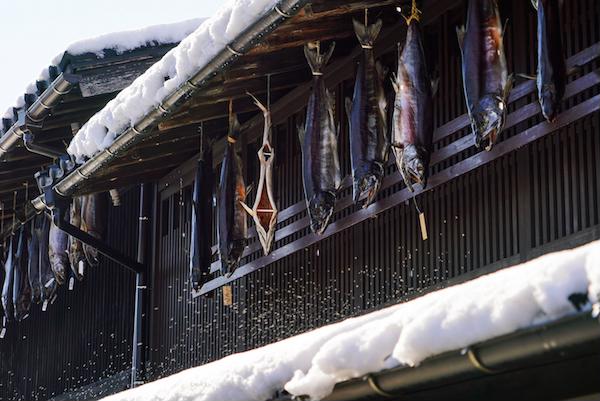 With plenty of salt rubbed in, the entire body of the salmon is hung out to marinade and mature in the northern wind
that blows in from the Sea of Japan, producing a rich flavor.
This method of production creates a view that is unique to Murakami. 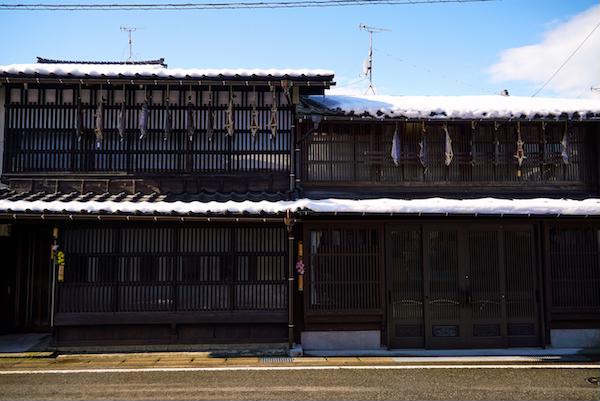