Located in Yahiko Village in Niigata Prefecture’s Nishikanbara District, Yahiko Shrine is the most prestigious shrine in the prefecture.
Dating back to ancient times, it’s mentioned in a poem that features in the Manyoshu, Japan’s oldest anthology of waka poems,
and has long been known as ‘Oyahiko-sama’ by the locals.
The exact date it was founded is unknown, but according to one theory, the shrine is said to have a long history dating back more than 2400 years.
Mount Yahiko sits behind Yahiko Shrine and is the shrine’s shintai, a sacred object of worship in which deities reside. 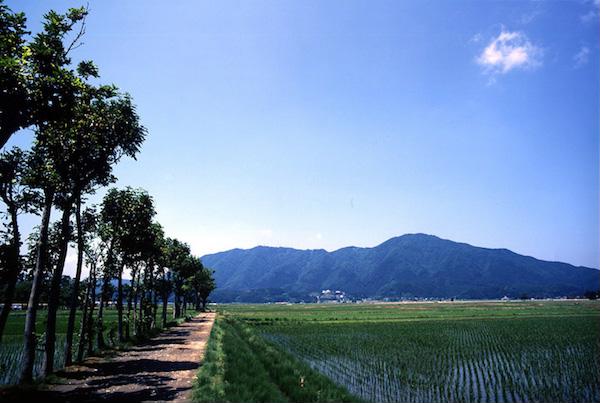 Standing in the middle of the vast Echigo Plain, Mount Yahiko is certainly impressive to look at
—it’s no wonder people in the olden days viewed it as a deity.

When facing Yahiko Shrine, the first thing that jumps out at you is the giant red torii gate.
Those arriving by car pass under it as they head to the shrine, while those on the train are able to see it from the window on the right hand side. 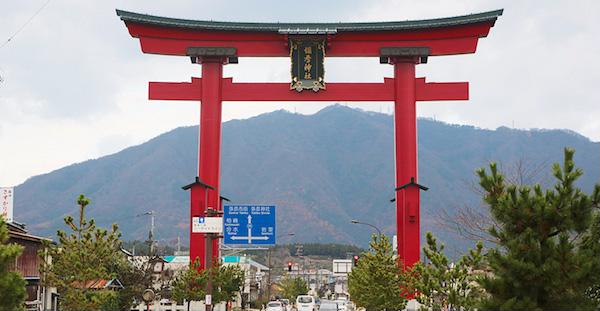 Known as an ‘Otorii’, this large torii gate is 30 m high making it Japan’s tallest in this specific style, which is known as a ‘ryoubu’ torii gate.
(By the way, the best torii gate in Japan is the one at Kumano Hongu Taisha in Nara Prefecture.)
Built to commemorate the opening of the Joetsu Shinkansen in 1982,
the shrine plate that stands over the top of the torii gate is 12 tatami mats in size—roughly 18 m2!
This is eye-wateringly big, as many Japanese apartments are actually smaller than this.
Mount Yahiko can be seen beyond this huge torii gate, and right at the foot of this mountain is Yahiko Shrine.

Head to the main hall, which has 2400 years of history

If you’re heading to Yahiko Shrine from Yahiko Station,
it’s about 1 km away so takes about 15 minutes on foot.
If you go by car, then there’s a convenient car park to the west of the shrine next to the ‘Ichi-no-Torii’, or the first torii gate. 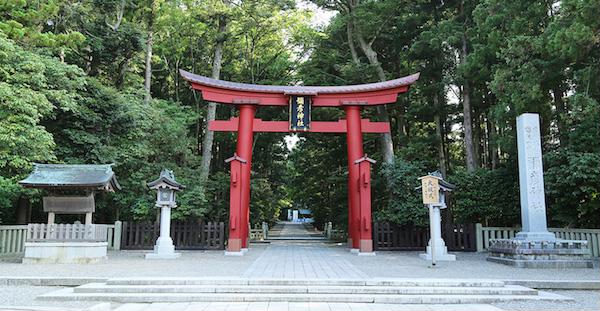 During cherry blossom season, use car park 1 which is in the village to the south of the shrine.
From here, you can enter the shrine while looking at the cherry blossoms. 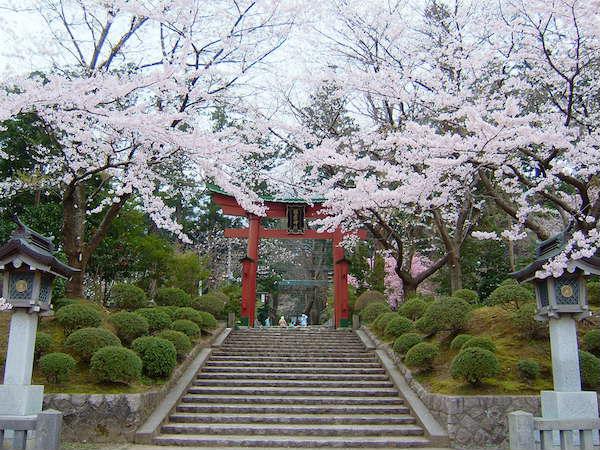 Now, as you pass under the Ichi-no-Torii located at the entrance of the shrine,
you’ll see the Tama-no-Hashi Bridge directly to the left-hand side which is not to be missed. 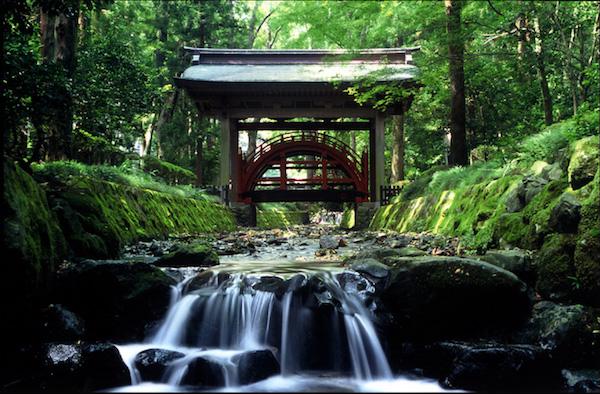 Painted in vermillion, only gods are able to cross this semi-circular bridge.
Walk for a while and then turn left.
Pass under the Ni-no-Torii, or the second torii gate, and head towards the main hall.
You can take in the shrine’s historic buildings and the nature of Mount Yahiko.
Following the entrance path, you’ll finally reach the main hall of Yahiko Shrine. 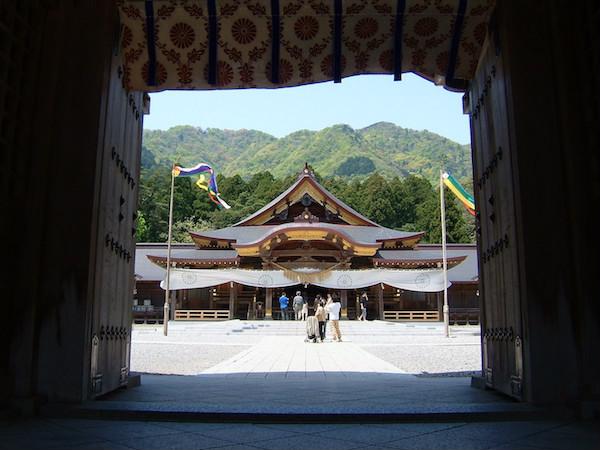 Mount Yahiko soars upwards directly behind the main hall and is Yahiko Shrine’s shintai, a sacred object of worship in which deities reside.
You can feel the magnificent power as the main hall and Mount Yahiko become one.
The main deity enshrined here is Amanokagoyama-no-Mikoto, who is said to be the guardian deity of development in Echigo Province,
modern-day Niigata Prefecture.
Here you can receive various blessings such as the safety of one’s family, business prosperity, road safety,
academic achievement and better fortune with work. 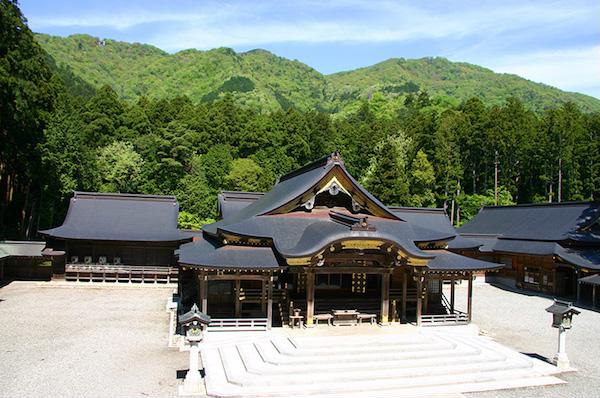 Unlike the typical method of prayer which is 2 bows, 2 claps and 1 bow,
the practice when visiting Yahiko Shrine is 2 bows, 4 claps and 1 bow.
It’s best to use this Yahiko-style of worship when offering your prayers so as to make the blessings all the more powerful. 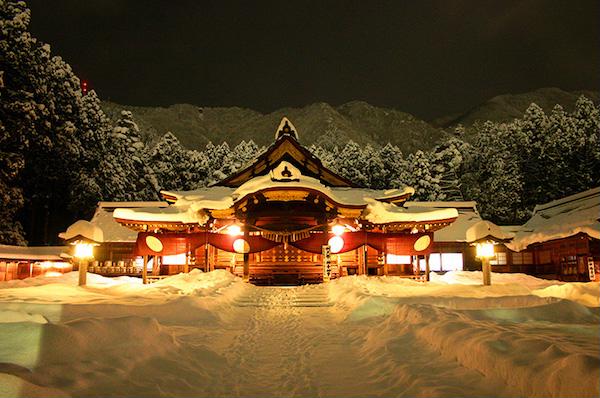 Take in the magnificent views of Mount Yahiko from the ropeway

After you have offered your prayers at Yahiko Shrine, take the ropeway to the top of Mount Yahiko which spreads out behind the main hall.
The ropeway station can be reached in about 5 minutes by taking the free shuttle bus, which departs next to the front shrine located within the shrine grounds.
This bus runs regular return trips during the ropeway’s operating hours.
It’s also 10 minutes away on foot, so you could walk depending on the season.
The ropeway takes about 5 minutes from the station at the foot of the mountain to the summit.
From mid-air, you can see both the Echigo Plain and the nature of Mount Yahiko at the same time. 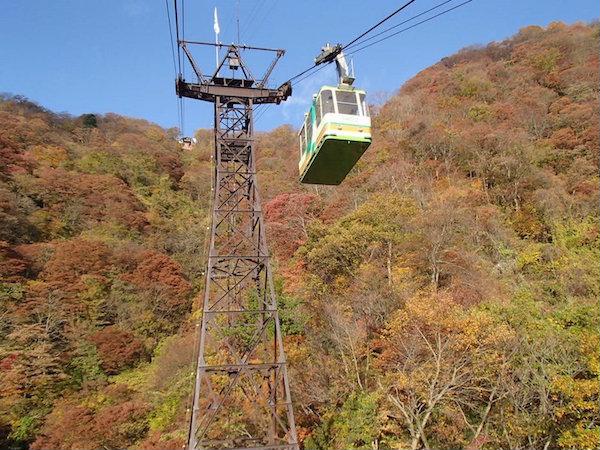 Especially popular during the autumn foliage season, you can enjoy a spectacular tour from the sky
while looking down upon the reds and yellows of the autumn leaves which paint Mount Yahiko.
Once you reach the summit station, climb about 400 m towards the top of the mountain and here you’ll find the rear shrine of Yahiko Shrine.
This is Mount Yahiko’s most sacred place and you can also admire some stunning vistas,
and so it has long been said that you can’t talk about Mount Yahiko without climbing it. 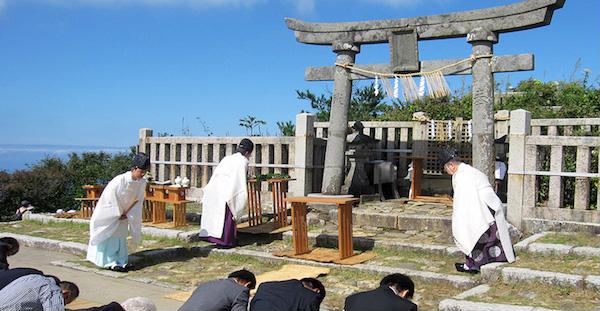 At 634 m, Mount Yahiko has the same elevation as the Tokyo Sky Tree.
Although it’s a small mountain, it offers some wonderful views with the magnificent Sea of Japan to the north and the vast Echigo Plain to the south. 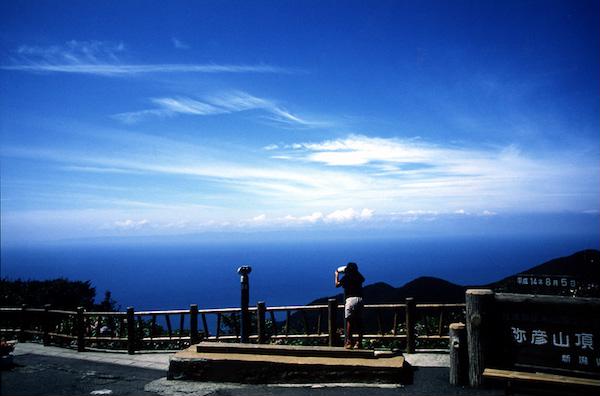 As well as using the ropeway, you can also drive up Mount Yahiko along the Yahikoyama Skyline.
However, the road is closed off from November to April during the winter season, and also when the weather is bad, so please check beforehand.

After you have enjoyed all that Yahiko offers, head into the onsen town that spreads out in front of the gate to Yahiko Shrine.
The water from Yahiko hot springs is gentle on the skin, so everyone from the elderly to babies can enjoy bathing here. 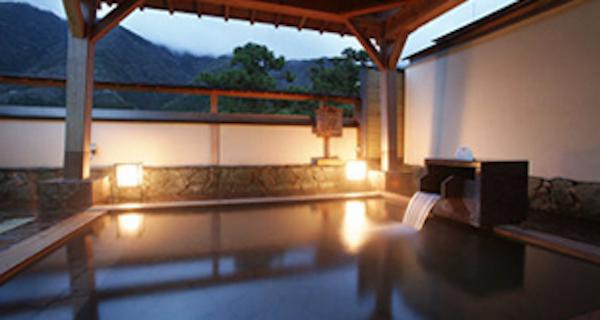 There is a row of around 10 ryokans, a traditional-style Japanese inn, and so you can take your time to fully enjoy the onsen with plans tailored to your trip,
from lodgings to a day visit. 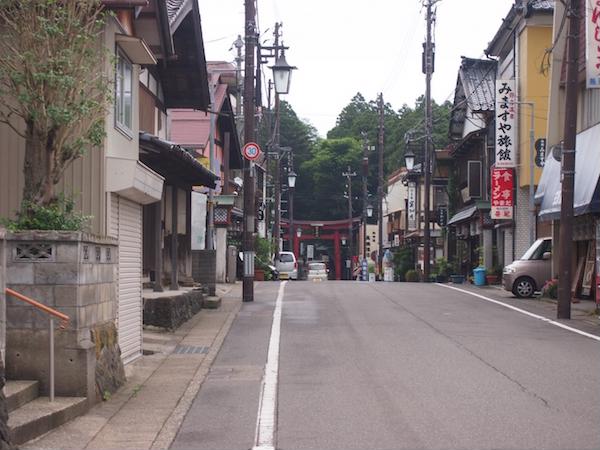 Within the onsen town, there are plenty of restaurants and teahouses where you can enjoy both seafood from the Sea of Japan and Niigata rice,
a specialty of Niigata Prefecture, to your heart's content.