・ Enjoy one of Japan’s most spectacular views—the Shiroyone Senmaida Rice Terraces
・ Become a rice paddy owner and experience rice farming
・ In winter, the contrast between the snow and the illuminations is a sight to behold

With an abundance of nature, Noto’s Satoyama-Satoumi were recognized as Globally Important Agricultural Heritage Systems (GIAHS) in June 2011.
‘Satoyama’ are unique socio-ecological systems that have been shaped over a long period of time by specific human actions, such as farming,
while ‘Satoumi’ refers to coastal areas that are strongly connected to people’s livelihoods. 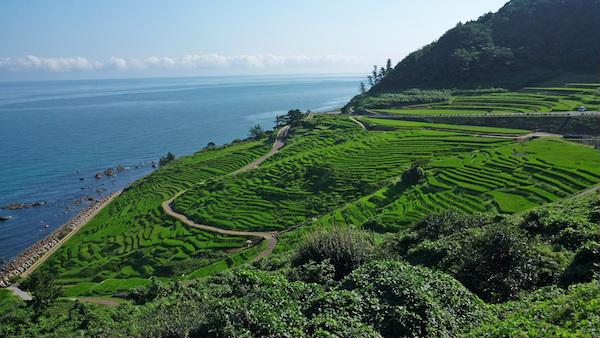 The Noto Peninsula is surrounded by nature and has several Satoyama-Satoumi, one of them being the Shiroyone Senmaida Rice Terraces
which are said to be one of the best sightseeing spots in the peninsula.
The tourist season used to be from the time when the rice was planted until the harvest.
However, since the Noto Peninsula was registered as a GIAHS, efforts have been made to revitalize the area
as a tourist destination and tourists can now enjoy the rice terraces throughout the year, no matter what the season. 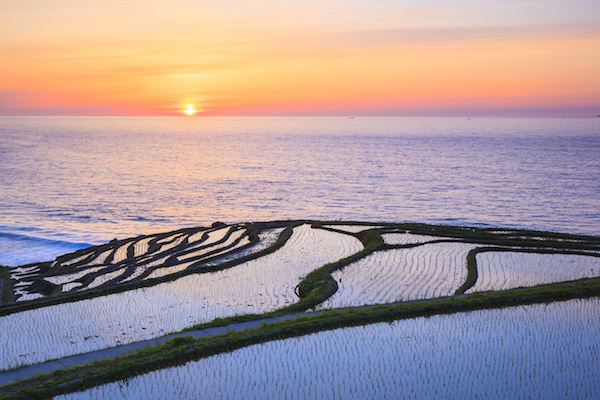 So what are the ‘Senmaida’ Rice Terraces?

The Senmaida Rice Terraces, and rice terraces in general, are a group of several paddy fields that have been built on the side of a steep slope.
Since making one large rice field would require substantial effort to cut into the slope and level it out.
As such, many small paddy fields are levelled out and created along the slopes of mountainous areas. 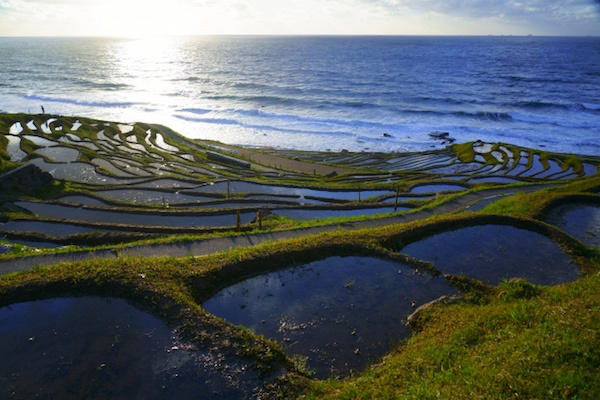 When this is done for other types of farming and not paddy fields, they are known as terraced fields “Dandan-batake”.
As for the Shiroyone Senmaida Rice Terraces, each rice paddy is considerably small at about 18 square meters,
while the entire rice terrace covers a total of around 4 hectares.
There are 1,004 rice paddies within these 4 hectares, which is why they are known as the Senmaida Rice Terraces
—‘Senmaida’ literally meaning ‘one thousand rice paddies’. 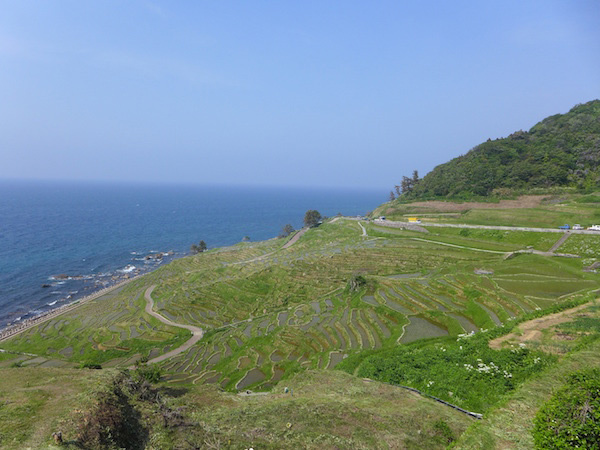 The rice terraces are located in Wajima City, near the tip of the Noto Peninsula in Ishikawa Prefecture,
and visitors have several transport options available.
By car,
take the Hokuriku Expressway and then from the Kanazawa-Nishi IC, take the Satoyama Kaido, the main Ishikawa Prefectural Road.
Then take Route 249 towards Suzu for around 2 hours and 15 minutes.
If you’re using public transport,
take a bus from Kanazawa station and get off at Roadside station Wajima.
Change buses and it’s about another 15 minutes from there. 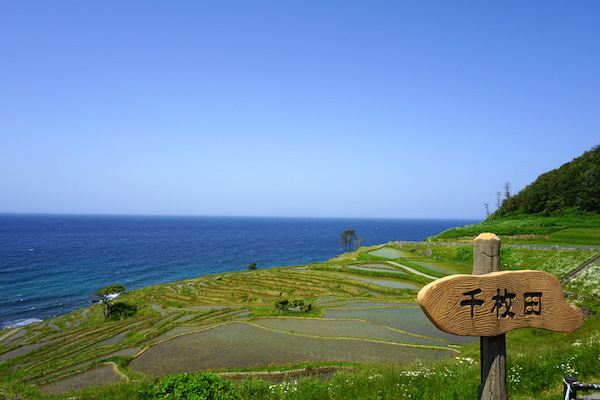 Facing the Sea of Japan, the Shiroyone Senmaida Rice Terraces are truly unique.
Visitors are welcomed throughout the year, and in spring, you can see rice being planted among the dazzling, fresh green leaves.
Rice planting is usually done from early to mid May.
Since the rice terraces are built along the slopes, they end up misshapen and too small to fit rice planting machines.
Given that machinery cannot be used, the planting methods here differ from other areas, with the rice being planted using traditional methods instead. 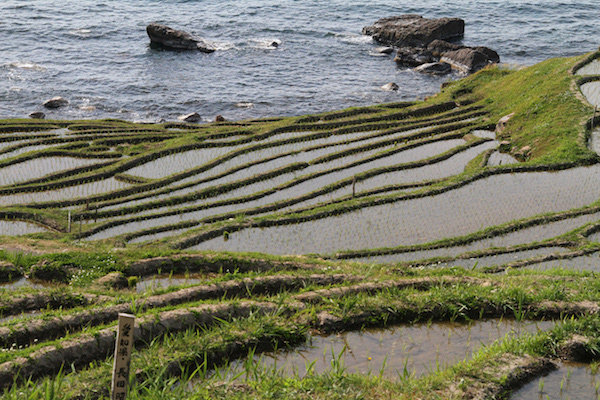 During the planting season, you can see people planting rice from 10am to 3pm.
While this time of year, the water in the flooded rice paddies turns into a mirror,
reflecting the freshly planted rice and creating a landscape unique to this Satoyama-Satoumi. 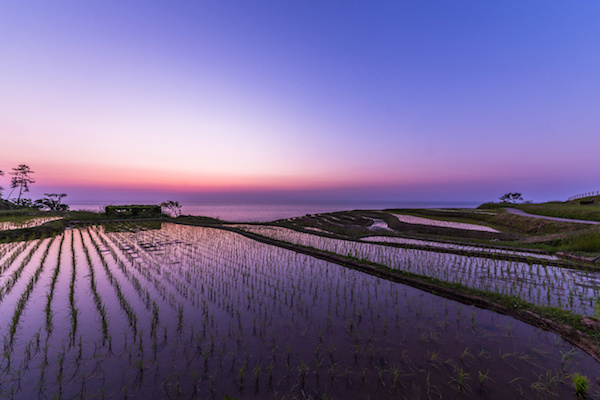 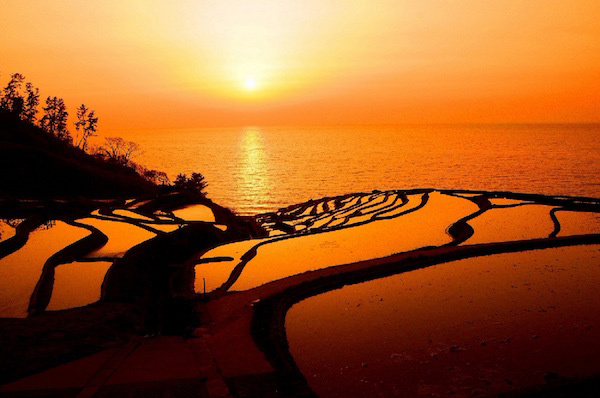 In the summer months, the rice that was planted in spring grows quickly and ears begin to show on the tips. 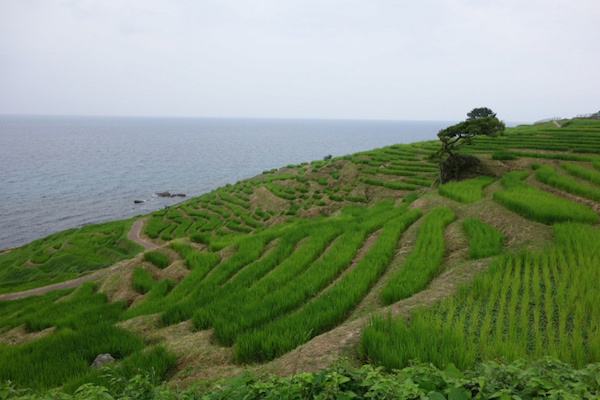 During this time of year, the paddies are in strong, direct sunlight so they have to be watched carefully to make sure they don’t dry out.
The rice terraces are constructed with a water channel which starts from the top-most paddies and flows down one by one to the lower paddies.
It’s remarkable what humans can do! 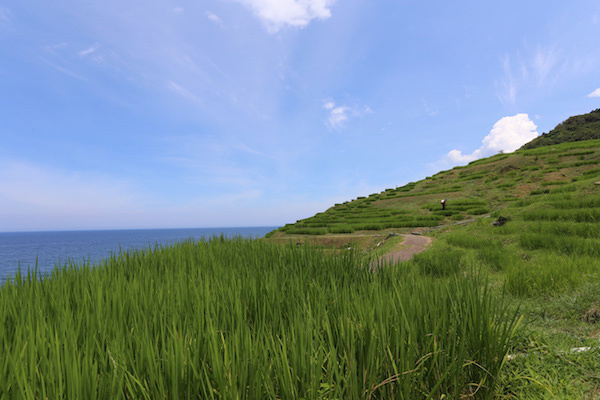 The harvest finally arrives in fall and you can see the golden rice being cut and harvested here at the Shiroyone Semaida Rice Terraces. 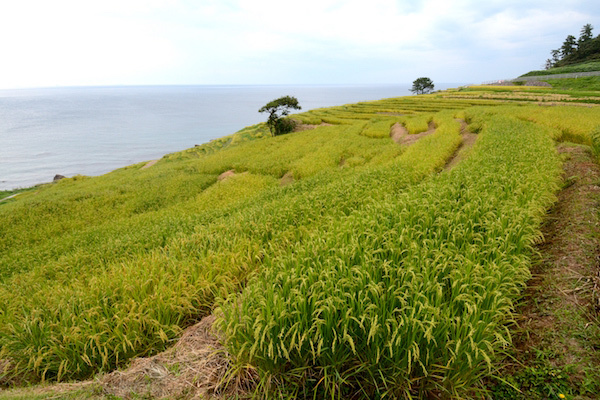 Just as machinery can’t be used in these paddies to plant the rice, it also can’t be used for harvesting which means this is all done by hand.
Not only that, but you can also see the rice drying out under the sun, a process known as ‘hazakake’ and a sight that is rarely seen nowadays. 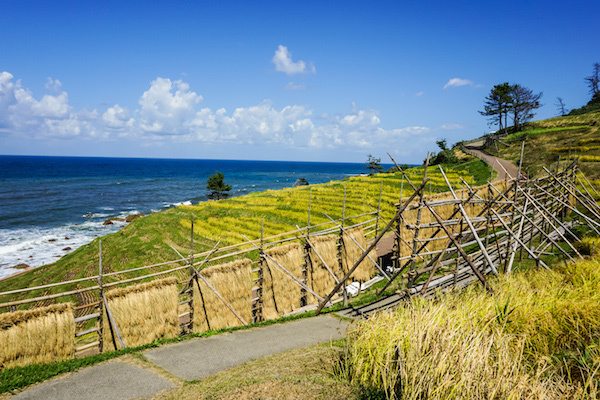 Snow and illuminations are popular with couples during winter

When the rice harvesting ends, the season of ‘Azeno Kirameki’, or literally ‘twinkling ridges’, will finally arrive.
Along the ridges of the now empty rice paddies, volunteers from all over Japan gather together and lay out the LED lights.
In the past, the tourist season used to be from the time the rice was planted to the time it was harvested,
but since Noto’s Peninsula was recognised as a GIAHS, efforts have been made to revitalize the area as a tourist destination
that people can enjoy throughout the year, no matter what the season. 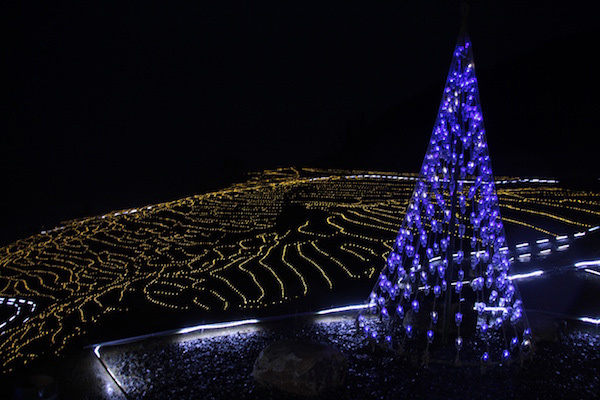 The Azeno Kirameki illuminations take place until around the middle of March when preparations for rice planting begin,
so you can enjoy a different side to the rice terraces throughout the year, no matter which season you visit. 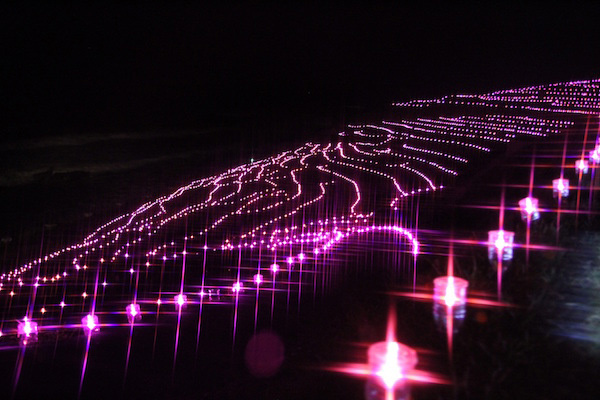 When the illuminations first began they only had pink lights, but as the years have passed,
the range of colours has increased and nowadays, you can see all sorts of coloured lights including yellow, green and blue.

Shiroyone Senmaida is great not only for the winter illuminations, but also during the daytime

You can enjoy different aspects of the rice terraces in each season, but they are especially worth visiting in winter when the illuminations take place.
Many people come to enjoy the illuminations during the weekends, and the tree-shaped lights make it a popular date spot for couples during Christmas in particular.
And it’s not just the evenings—the daytime is also remarkable. 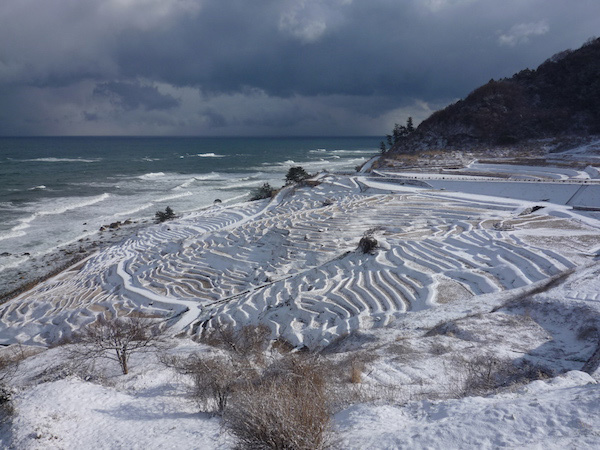 The strong winds from the Sea of Japan blow in snow and as it builds up, the rice terraces are completely covered in white.
Along the nearby coast, you can also enjoy sea foam, a natural phenomenon where the waves crash into the rocks and form tiny bubbles which are then blown away.

The rice terraces also have a Shiroyone Senmaida Owner System where individuals can become rice paddy owners by paying a fee.
You can then select one of the 1,004 paddy fields that haven’t been taken yet and register as the owner. 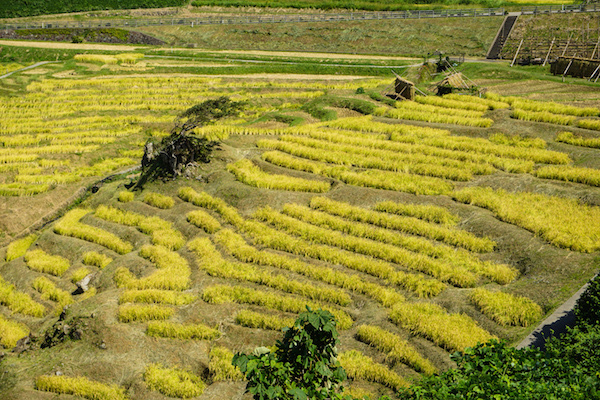 The rice paddy owner system is wonderful in that it gives you your own rice paddy to experience rice farming right through from planting to harvesting.
Plus, if you don’t live nearby, the system arranges for local volunteers to take care of the planting and harvesting, and any rice crops will then be sent to their owners. 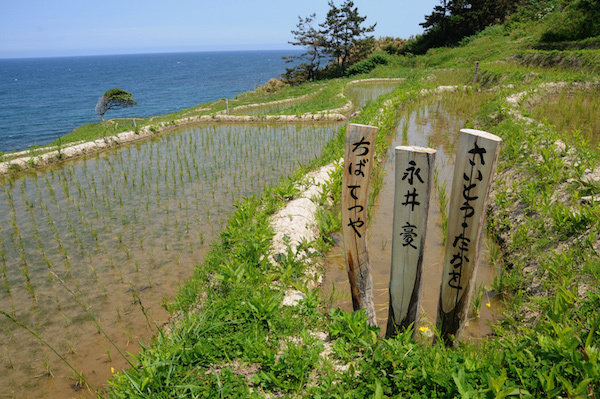 Many different people have become members of the Shiroyone Senmaida Owner System, from manga artists and politicians, to famous actors and actresses.
This is a great opportunity for those who want to enjoy an agricultural experience, so why not consider registering?