・Japan’s first temple, Asuka Temple, was relocated
・One of the components of the World Heritage Site
・There are three national treasures—the Main Hall, the Zen Room and the miniature five-storied pagoda

When talking to those involved in Nara’s tourism,
practically everyone says that visitors who come on day trips only see The Great Buddha and Kofuku-ji Temple.
It’s understandable why people would view Nara as more of a day trip from Kyoto,
since it doesn’t have as much to offer and there are few hotels and restaurants.
But, Todai-ji and Kofuku-ji aren’t the only places to see!

And with that being said, let’s introduce Gangoji Temple—the one temple in Nara that you should definitely go and visit.

Gangoji Temple is located in Naramachi, an area to the south side of Kintetsu-Nara Station which is lined with rows of old houses.
This is only a small residential area so the temple is easily missed,
but there’s a World Heritage sign at the entrance which should help you find it.

Gangoji Temple was originally Hokoji Temple (now known as Asuka Temple).
It was located in the village of Asuka, Nara Prefecture, and was the first Buddhist temple in Japan.
When the capital was moved from Asuka to Nara in 710, Hokoji Temple was dismantled and rebuilt in Nara.
At that time, it was considerably larger than the Gangoji Temple we see today, spanning roughly 440 m north-south and 220 m east-west.
There was a fire in 1451 during the Muromachi period,
and the section of the temple that was untouched by it still stands today as Gangoji Temple.

The main parts of Gangoji Temple are the Main Hall (also known as either the Gokuraku-do Hall or the Mandala Hall), and the Zen Room.
Both of these have been designated as national treasures.
It appears that when it was still part of Hokoji Temple before the fire took place,
this structure that now forms Gangoji Temple was originally the monk's living quarters. 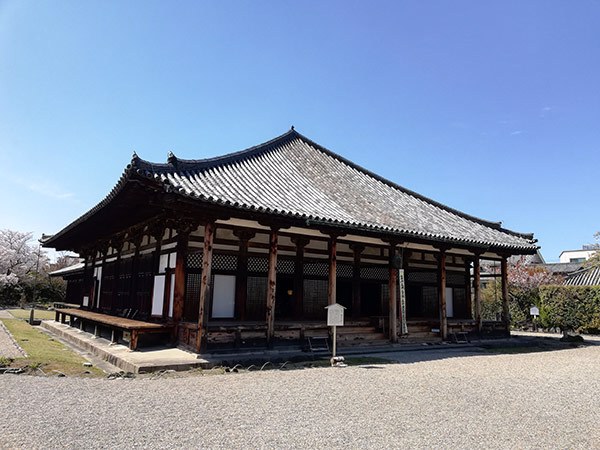 Having replaced the exterior of the monk’s living quarters, the Main Hall is a little wider than it originally was,
but the Zen room is still the same.
In other words, most of the Zen room and Main Hall remain the same as they were 1,300 years ago making this the oldest wooden building in Japan,
and it’s still being actively used.
This is why it has been designated as both a national treasure and a World Heritage site.
Kyoto is also known for its old temples, shrines and houses,
but most of them were only built around 150 years ago after the Edo period (1603-1868). 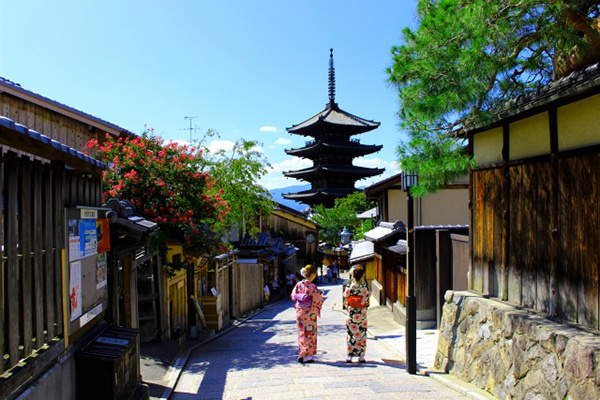 So how come such old buildings have been able to survive in Nara?
The reason is believed to lie in the fact that from 710, it was only the capital city for about 70 years.
It was established as the capital and various buildings were constructed, but when the capital moved,
it was separated from the political centre which enabled it to avoid the large-scale wars that took place.
It’s thanks to this that many historical buildings remain.

Take a look around Gangoji

Temple First off is the Gokuraku-do Hall.
When you enter the temple grounds through the east gate, which is also the main entrance,
this Main Hall will jump out at you straight away. 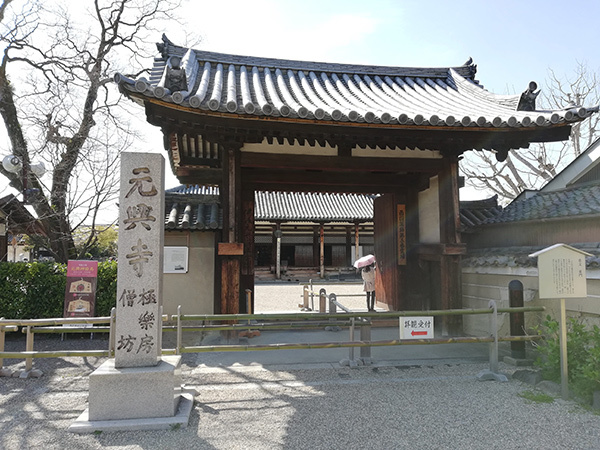 If you look at it straight on, you will 7 pillars.
Only the 5 in the centre made up the original building which was the monk’s living quarters,
with 1 pillar being added onto each end to form today’s Main Hall. 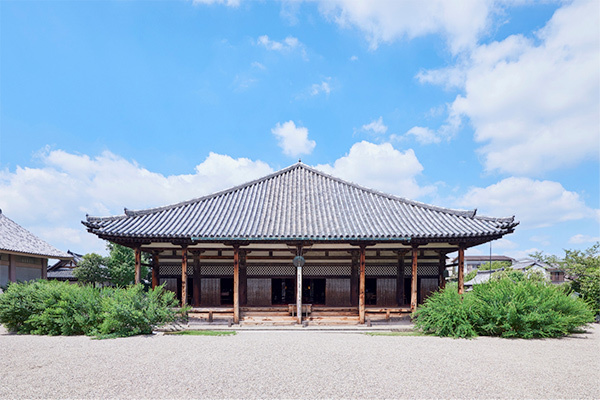 This means the central part of the building is what remains from the Nara period.
Compared to other cities, the streets of Nara feel more easy-going, and this can also be said for the architecture.
You can feel a sense of gracefulness in the gentle, curved roof of Gangoji Temple,
and before you do anything else, you should make sure to take in this relaxed atmosphere.
Once you have had your fill of all there is to see from the outside, head into the Main Hall.
In the central area of the hall, the temple is adorned with the Chikou Mandala.
Painted in Gangoji Temple in the 8th Century by a Buddhist priest called Chikou,
this is a representation of Amida’s Gokuraku Jodo (Pure Land of Bliss) which he had seen in a dream.
This is why the Main Hall is called the Gokuraku-do Hall.
The one that now adorns the Main Hall was apparently painted during the Edo period.
Gangoji Temple is also home to other nationally designated Important Cultural Properties,
including the Chikou Mandala miniature shrine and the Chikou Mandala panel painting.
These are open to the public for only a limited time during autumn. 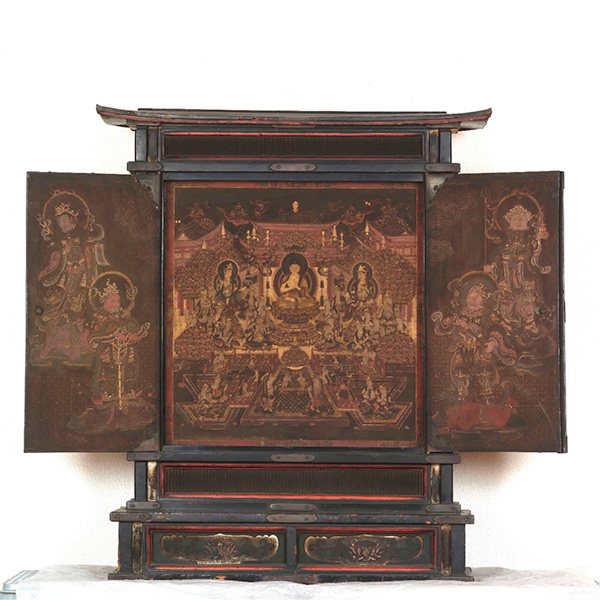 While the Mandalas are not to be missed, don't forget to take in the actual building of the Gokuraku-do Hall as well.
You will be astonished to see that this wooden building, constructed 1,300 years ago, still remains intact.
When you leave the hall, head round the back to the Zen Room.
You can’t go into this room, but if you compare it with the Gokuraku-do Hall,
you can get a sense that the two were originally connected as the priests’ living quarters. 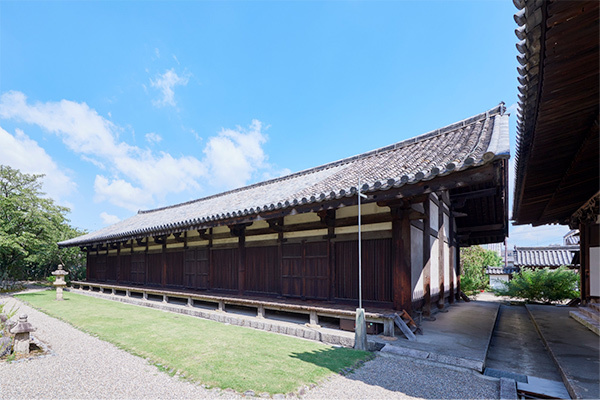 There’s also a viewing spot where you can see the exterior of both buildings,
so don’t forget to head over and take a look!

The viewing spot is at the very end of a narrow pathway which can be found down the side of the Gokuraku-do Hall and Zen Room,
lined on either side with stone monuments and Buddha statues. 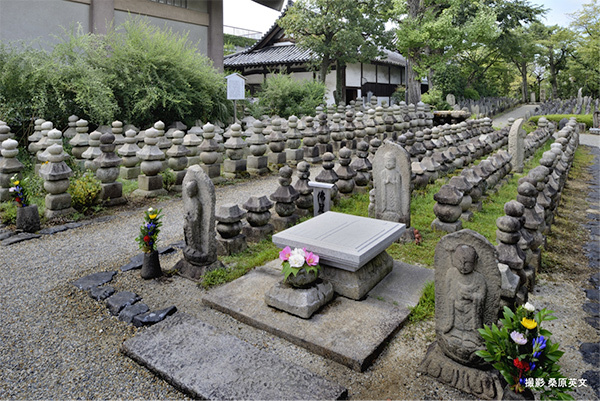 Once you reach the end, turn around and you will see both the building and roof of the Gokuraku-do Hall
—a precious sight that cannot be seen anywhere else. 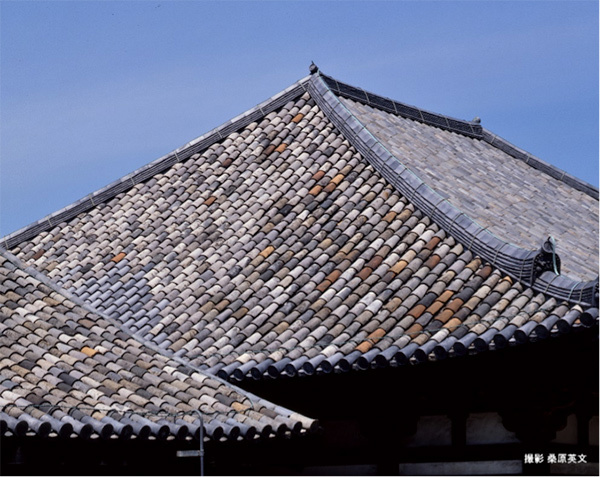 The tiles you can see on the roofs of both the Zen Room and the Gokuraku-do Hall are the oldest roof tiles in Japan.
Compared to those used in other sections, you can see that some areas are filled with lines of reddish tiles.
These roof tiles were transferred to Nara along with the rest of Hokoji Temple,
and then around the end of the Edo period when Gangoji Temple became run-down,
they fell from the roof and were scattered around the premises.
Then, Tsujimura Taien—who became the temple’s chief priest during the early Showa period (1926-1989)—gathered the tiles and re-laid them on the roof.
During the cherry blossom season, this spot offers a view of these Asuka period tiles together with the cherry blossoms,
a sight which is known as ‘Yogo-Zakura’ (literally ‘Shadow-facing cherry blossoms’).
It’s a beautiful sight to see. 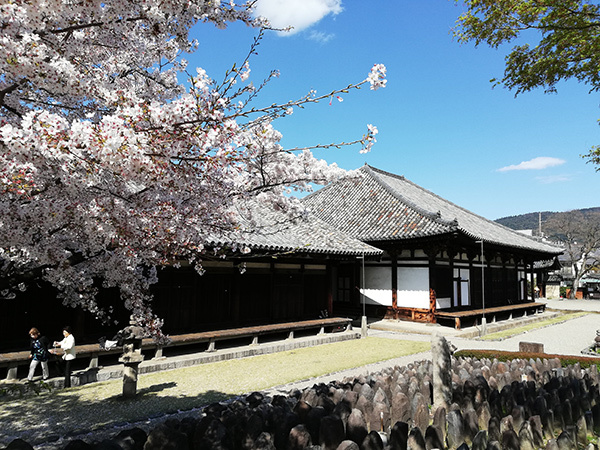 You can of course enjoy beautiful sights during each of the different seasons,
so make sure you take in the history while also enjoying the scenery, too.

Once you have finished looking around the Gokuraku-do Hall and the Zen Room, you may think there’s nothing left to see.
But don’t forget, there’s also the Treasure House (Horinkan) which is located to the south side of the premises.
This is where they store the Buddhist statues and materials, and inside these can be seen from up close.
The room is decorated with various things,
but the one item among them which must be seen is the miniature five-storied pagoda that stands directly at the entrance to the Treasure House.
This has also been designated as a national treasure. 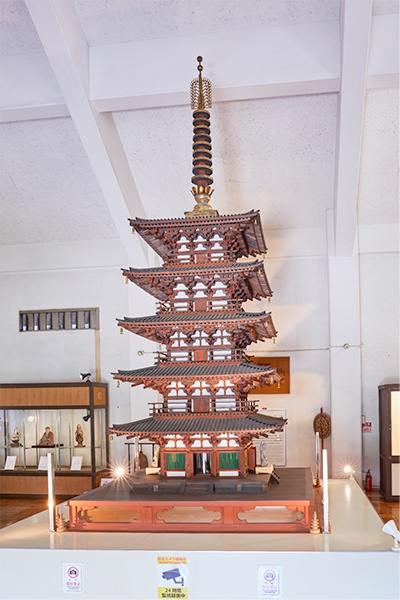 This miniature five-storied pagoda is 5.5 m high and was produced during the latter half of the Nara period.
What makes this so amazing is that they have replicated the actual architecture of a life-sized pagoda, but to a smaller scale.
In other words, if they were to enlarge this miniature five-storied pagoda, it would be fully functional as a normal, five-storied pagoda.
As such, this miniature pagoda has been designated as a national treasure, and not as a piece of artwork, but as an actual building.
If you look at it closely, you can see the really fine details that have been carefully included, and it’s impossible to get bored of looking at them.
Whether it was built for Buddha’s ashes or as a model for making a large five-storied pagoda,
the purpose of this national treasure is unclear and there are various theories.
Unfortunately, photos are prohibited in the Treasure House, so make sure to memorise this tremendously small building well.
Gangoji Temple may not be large,
but there are plenty of sights worth seeing within its compact premises.
Plus, there’s the Naramachi area around the temple where you can see rows of old houses all lined up. 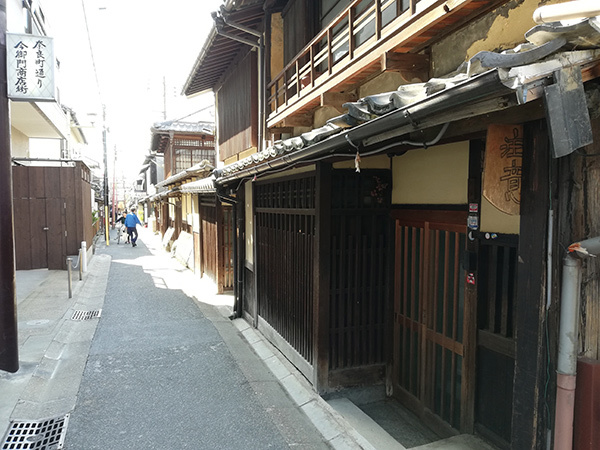 Now you see—there’s so much more to the city of Nara than just Todaiji and Kofukuji!
Hopefully you can also explore more of what Nara has to offer.