・A secret spot hidden between Nara’s go-to temples, Todaiji and Kofukuji
・Enjoy two styles of garden from both the Edo and Meiji periods
・Experience the ultimate luxury of drinking matcha while looking out over the gardens

Nara’s best kept secret is not to be missed

Do you know where you want to go when you visit Nara?
Todaiji Temple?
The Great Buddha is huge and it’s truly spectacular, so you should visit there.
Kofukuji Temple? The five-storied pagoda is pretty coo, and the temple has the biggest collection of national treasures in Japan.
You should definitely go see the reconstructed Central Main Hall, or the ‘Chukondo’, and the National Treasure Museum. 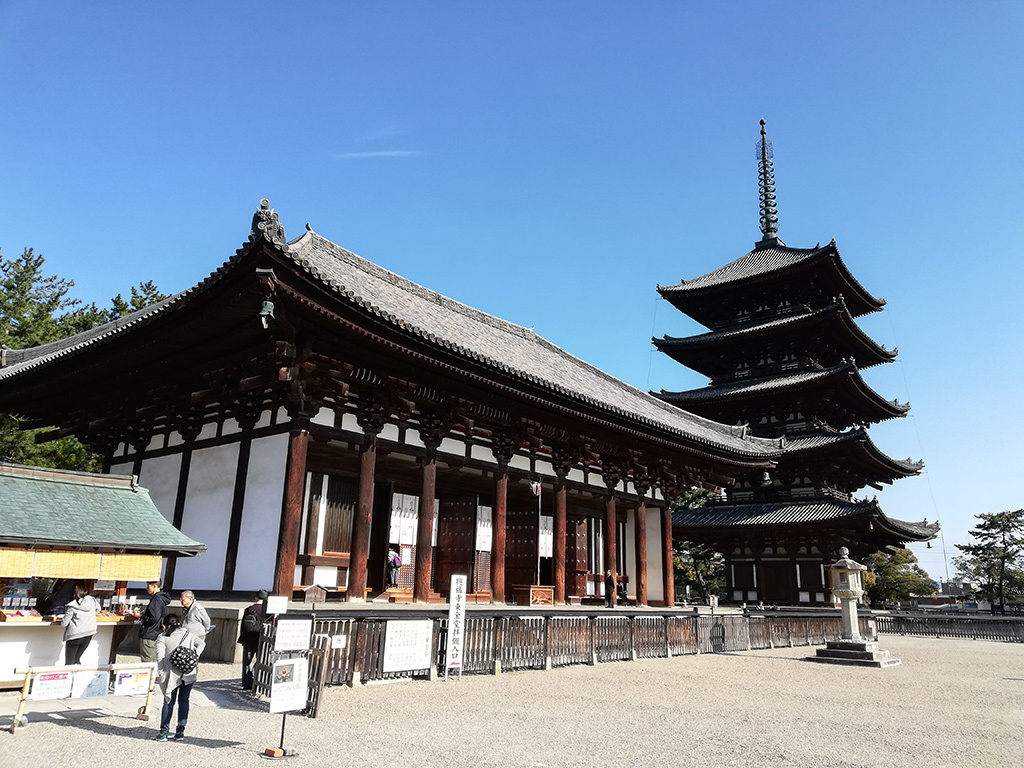 And then what?
Will you head back to Kyoto?
If you want to enjoy more of Nara, then a great place to visit would be Isuien Garden.
You don’t need much time to look around, and situated between Todaiji and Kofukuji, there’s nowhere else as beautiful as here. 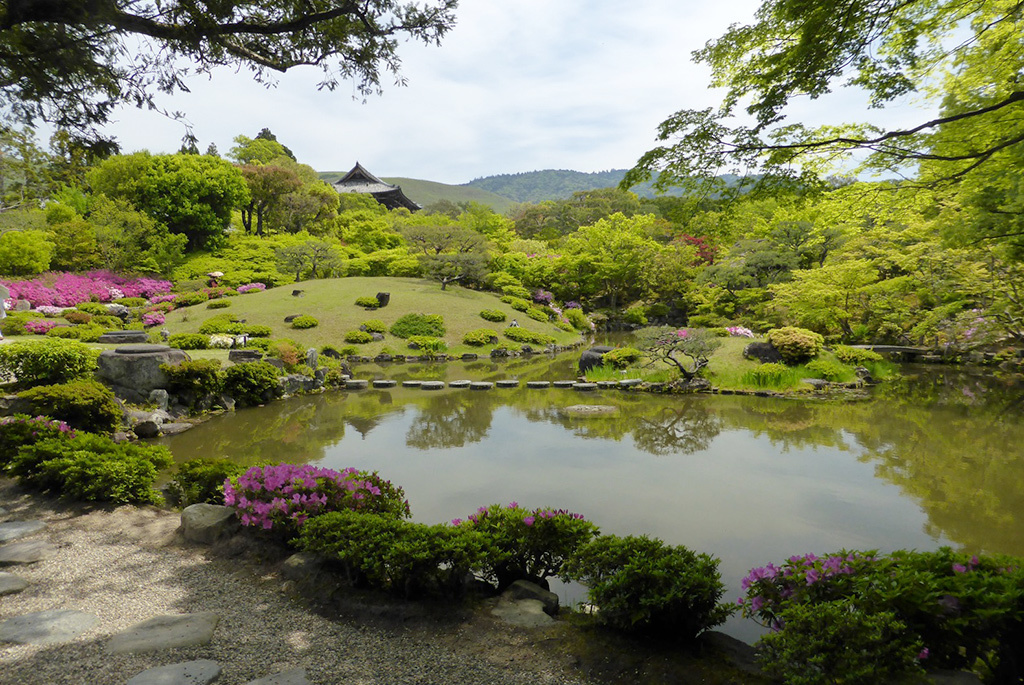 Try to add these beautiful gardens to your sightseeing plans for Nara. 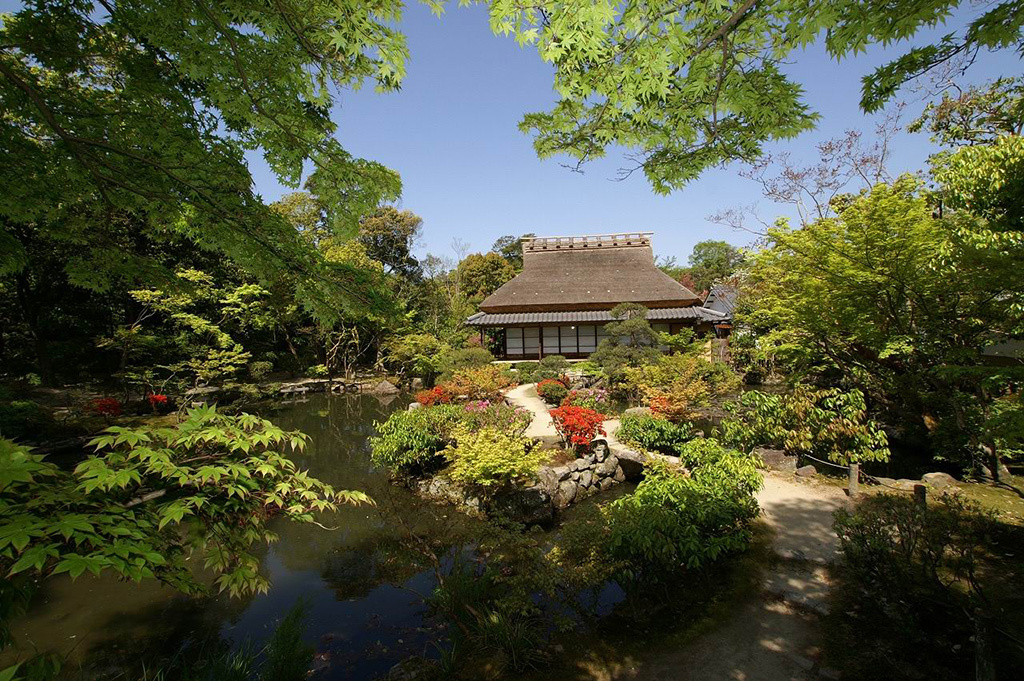 There’s a pond in the center of the garden, and in the middle of this pond is a small island with a bridge crossing over to it.
In contrast to this, the Rear Garden is spacious and open.
It was added after Seki Tojiro, a businessman from the Meiji period, purchased the Front Garden,
and Soshitsu Yumyosai, a master of the tea ceremony and the 12th headmaster of the Urasenke School of Tea, was the one who actually created it.
You can stroll around this garden and enjoy the “borrowed landscape” of Todaiji Temple’s Nandaimon gate nearby and Mount Wakakusa in the distance.

In 1939, both gardens were purchased by Nakamura Junsaku, who made his fortune in the shipping industry,
and he combined the two together to create the gardens that we still see today.
While gardens are wonderful, the Rear Garden offers more to see.
With that in mind, let’s focus on this half of the grounds as we introduce the charms of Isuien. 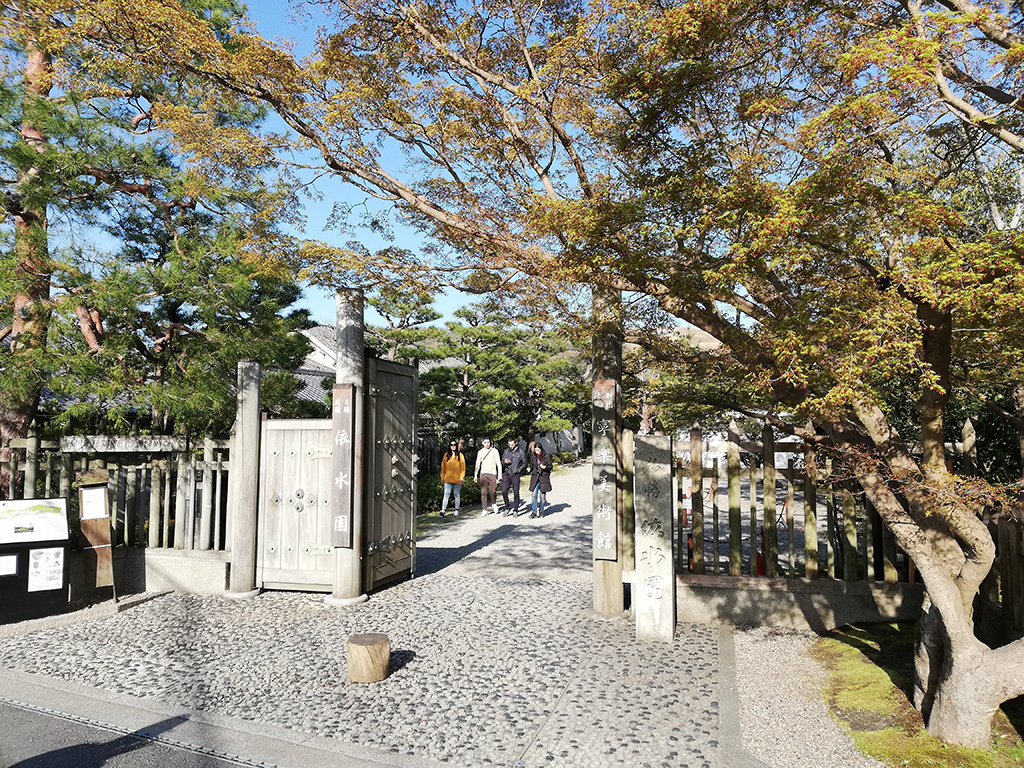 After you pass through the gate, first make sure to pay the entrance fee at the front reception on the left.
It’s 1200 yen for adults, and this includes entrance into the Neiraku Museum.
The museum also displays bronze ware from ancient China, writings by the Chinese calligrapher Wang Xizhi, and Korean Goryeo ware, all of which are also worth seeing. 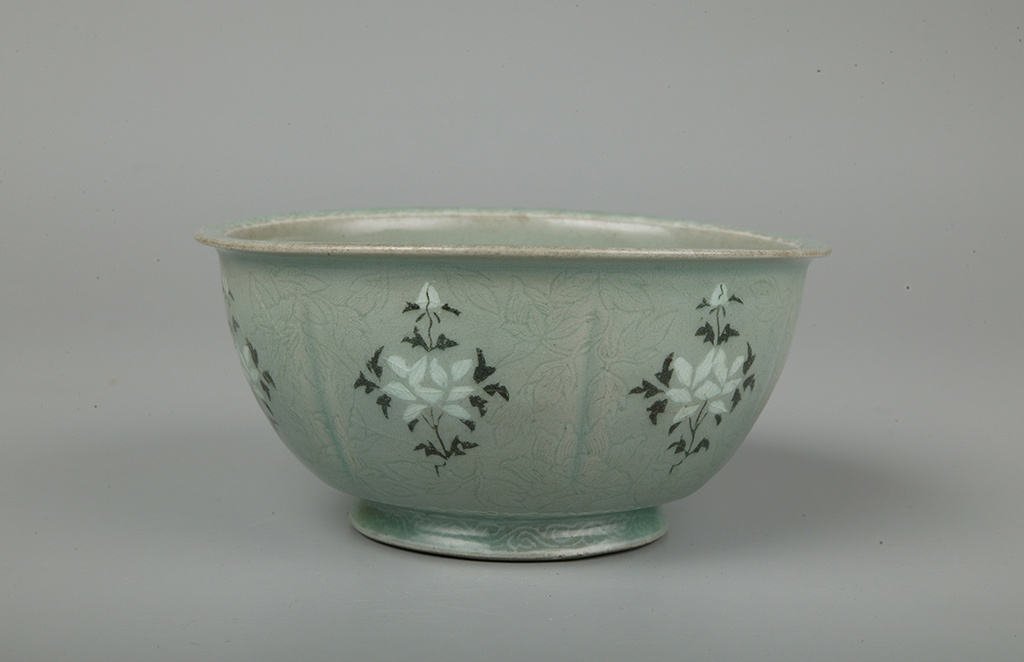 But first, head over to the garden.
When you pay at reception, turn around and on your left you’ll see a building with a tiled roof—the entrance is just to the side of this.
Pass through a wooden gate and the Front Garden will be to the right, while our route through the Rear Garden can be found to the left.
Follow the stepping stones this way—there will be a building along your left-hand side.
Once you have passed the building with the tiled roof, you’ll see the Hyoshintei Tea House which has a thatched roof.
If you look carefully at the windows, you’ll notice that the glass is wavy.
This is because the windows are made using blown glass from the Meiji period. 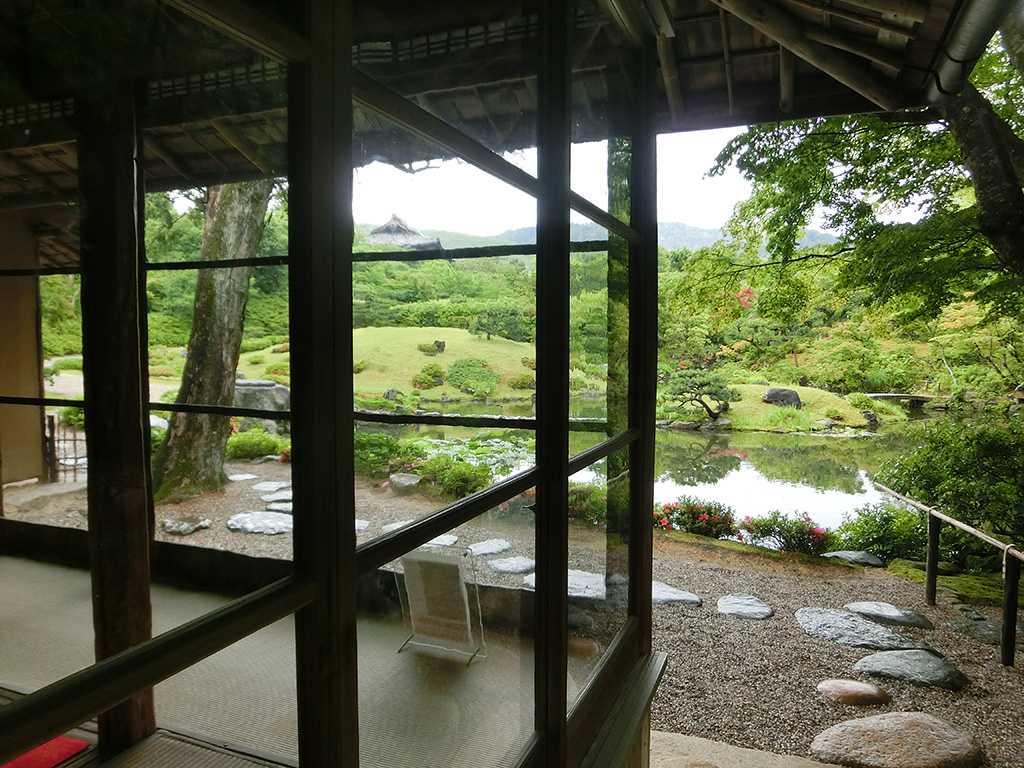 You can see that both this building and the gardens have been carefully looked after.
If you look at the roof as well, you’ll see some abalone seashells which glitter in the sunlight and repel the birds.
This prevents crows and such from pulling out bits of the roof to use in their nests. 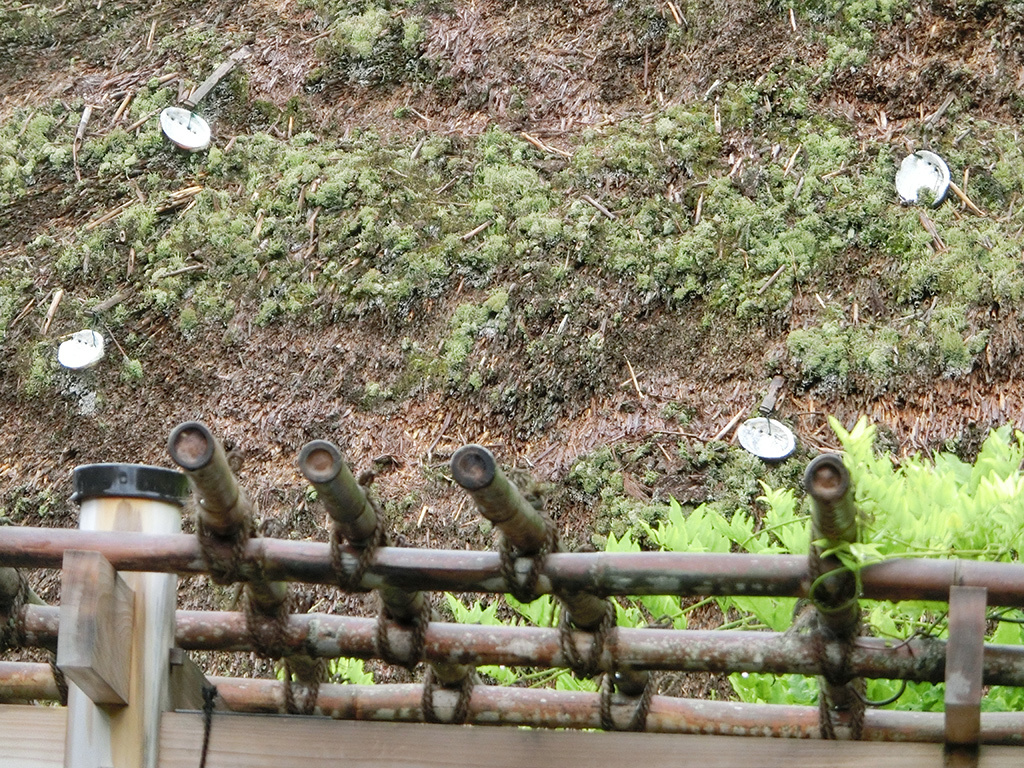 Keep going and just past the buildings, you’ll suddenly find yourself looking out over one of Isuien’s top views.
Within the vast expanse of this garden, there are beautifully arranged trees and a huge pond.
Opposite the pond are some man-made hills, and even further beyond those,
the garden makes use of Todaiji Temple’s Nandaimon gate and Mount Wakakusa in its landscape.
The view is spectacular and no doubt you’ll want to stand here for a while. 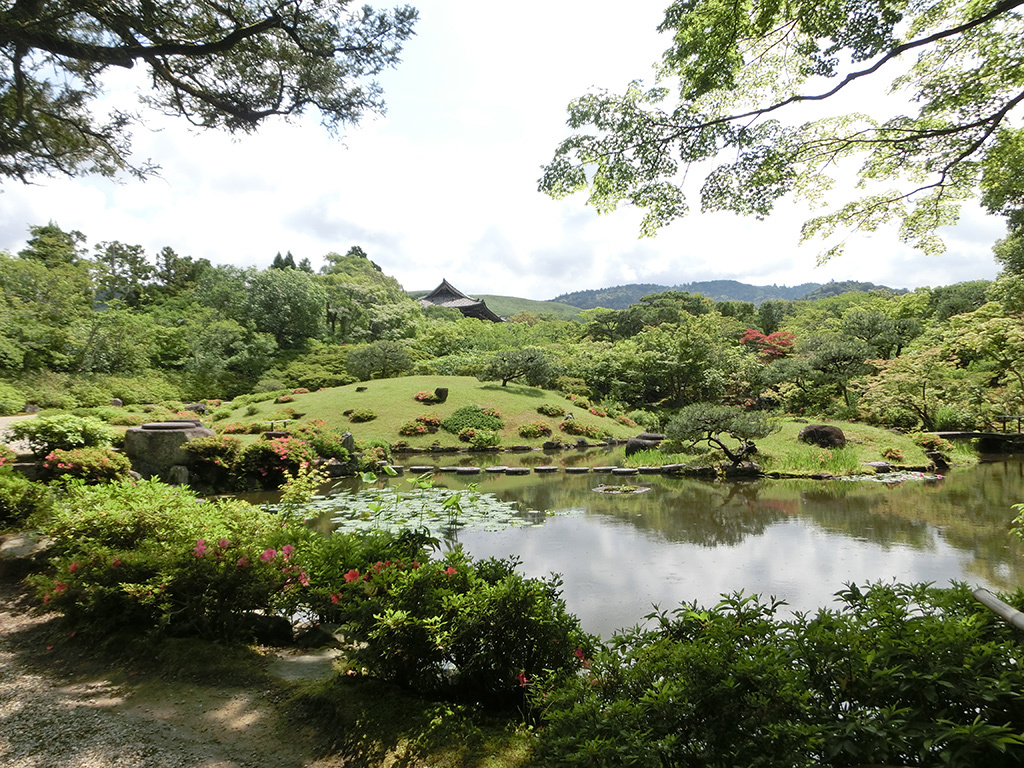 The building from earlier, Hyoshintei Tea House, was laid out specifically so you can see this view from within the room.
This building was apparently made using wood from one of the buildings over in the grounds of Shin-Yakushiji Temple,
and here is where you can have a drink of some matcha tea.(1000jpy). 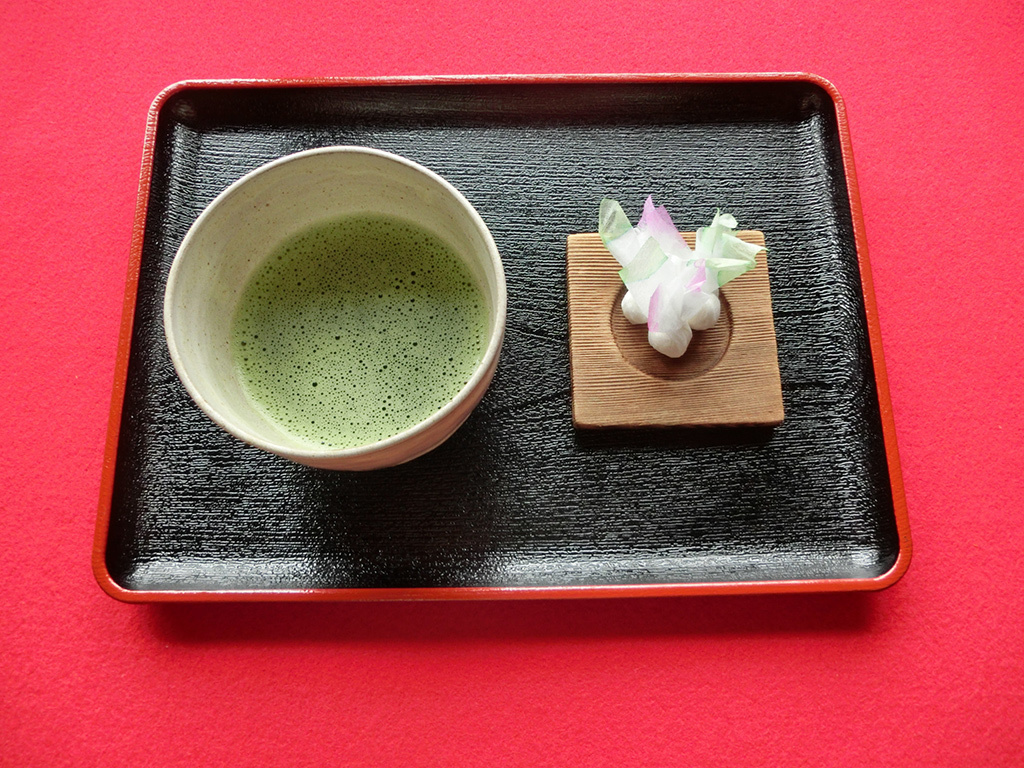 Having a quick break and taking in the scenery is a truly special experience.

The changing sceneries and sounds

The garden follows a circuit that lets you idle away your time as you enjoy strolling around.
Next to the pond directly in front of the Hyoshintei Tea House, there’s a garden rock.
At one time, this was used in the foundations of Todaiji Temple’s pagoda.
There’s a large circle cut into the top of the stone, which is a remnant of one of the pillars. 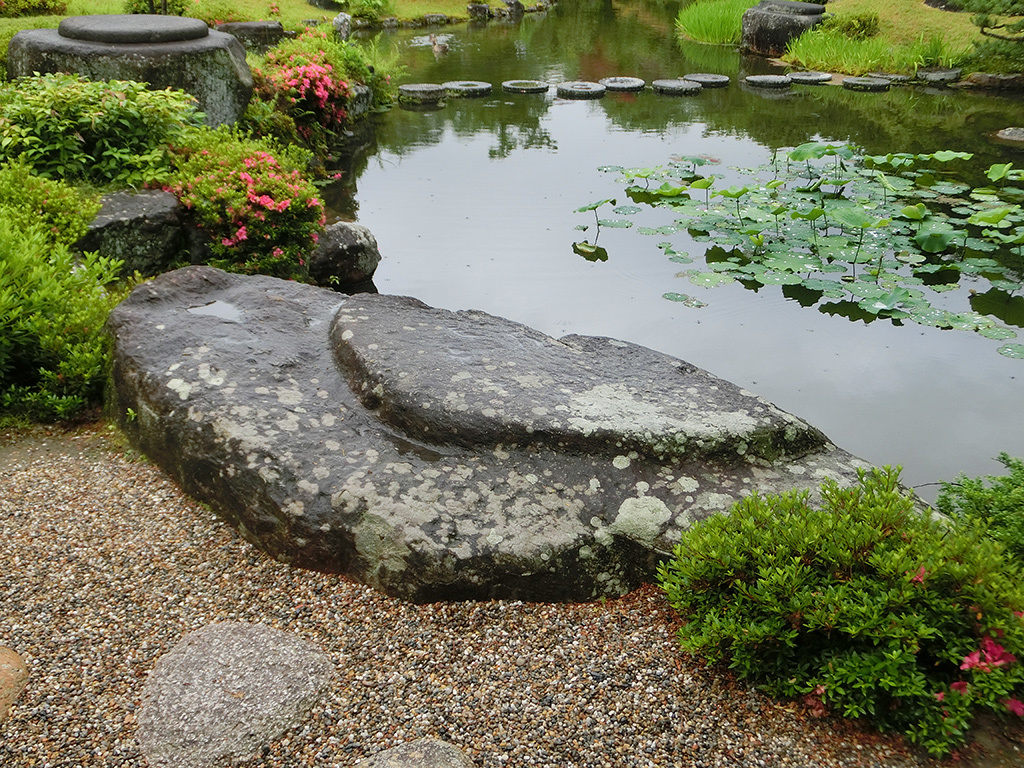 There’s a small island in the middle of the pond,
and although it would be great if we could cross over to it, unfortunately we have to show some restraint as it’s off limits.
It’s worth noting that in some Japanese gardens, you might see stones placed at the end of passages with a rope criss-crossed around them.
These are known as sekimoriishi, literally “barrier keeper stones”, and they indicate that the area past that point is off limits. 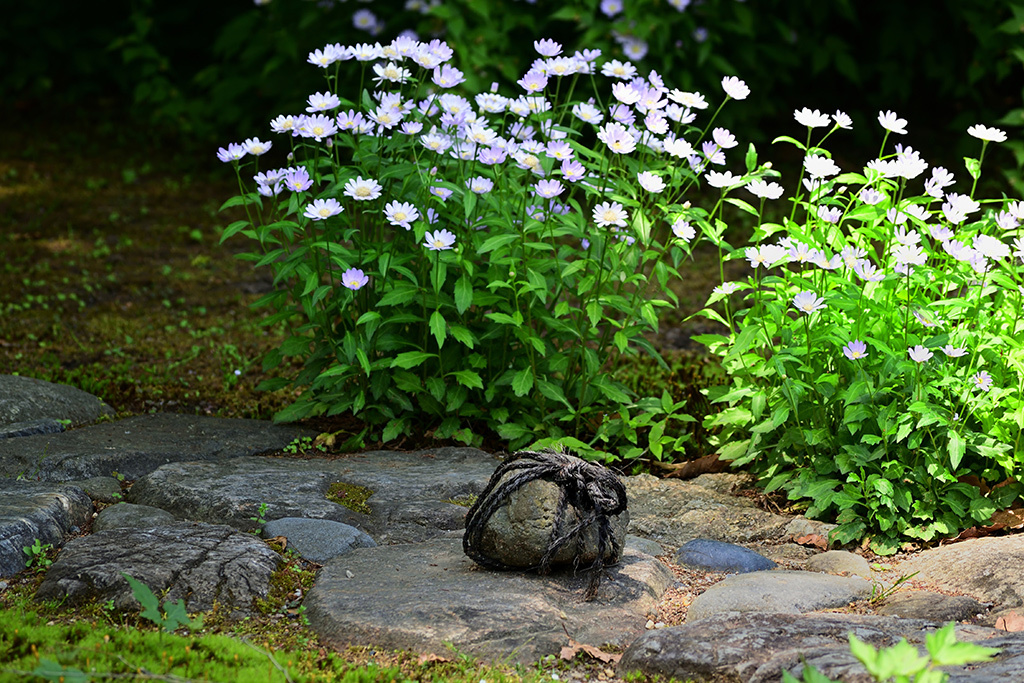 As you wander around Isuien, listen out for the sound of water.
If you follow the path from the Hyoshintei Tea House and enter the side of the hilly area, you’ll notice that the sound of water can no longer be heard.
Then, as you walk through this section, you’ll start to hear the faint sound of water flowing.
Follow the sound down a narrow pathway and a small waterfall will appear on the other side of the pond.
Keep going and when you cross the stepping stones, you’ll see a watermill. 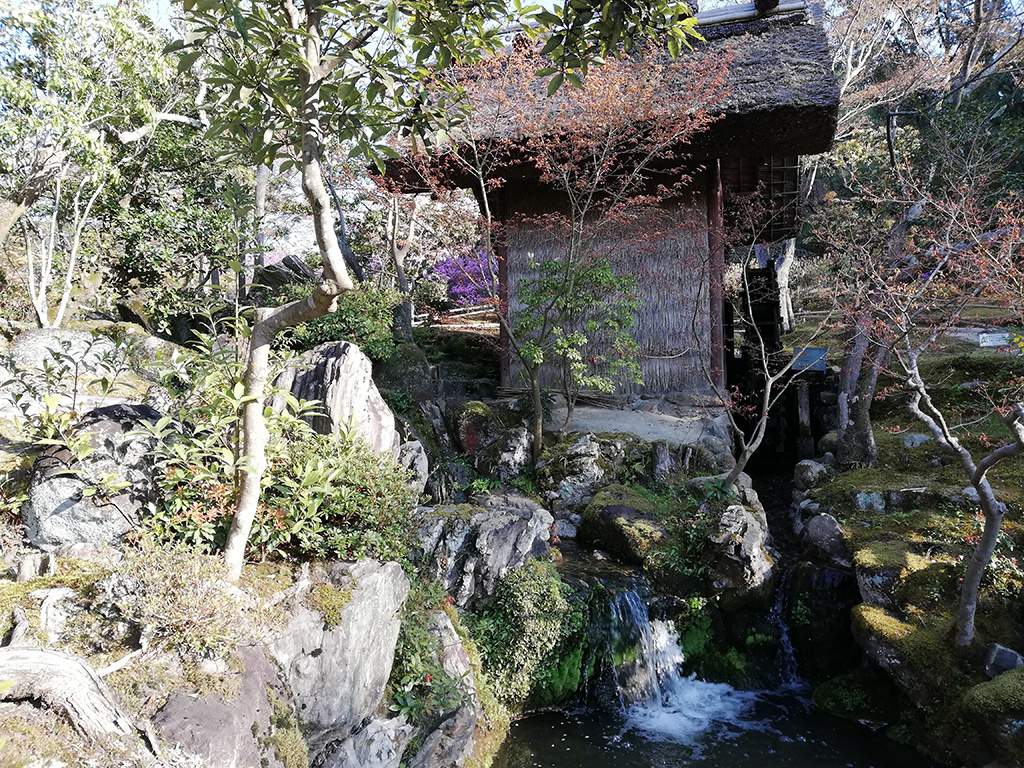 Here, the sound of the water will once again change.
You can enjoy not only the visual aspects of the garden, but also how these sounds have been incorporated into the design.
Of course, you’ll probably want to enjoy a leisurely walk around without dwelling too much on such things.

Which season is the most beautiful?

The wonderful thing about Isuien is that flowers are planted for every season, so no matter what time of year you visit,
you’ll be able to see beautiful landscapes.
Starting with camellia in February, there are plum and cherry blossoms, azaleas, wisteria, and water lilies.
Then in fall, the maple trees are painted in the beautiful colors of autumn. 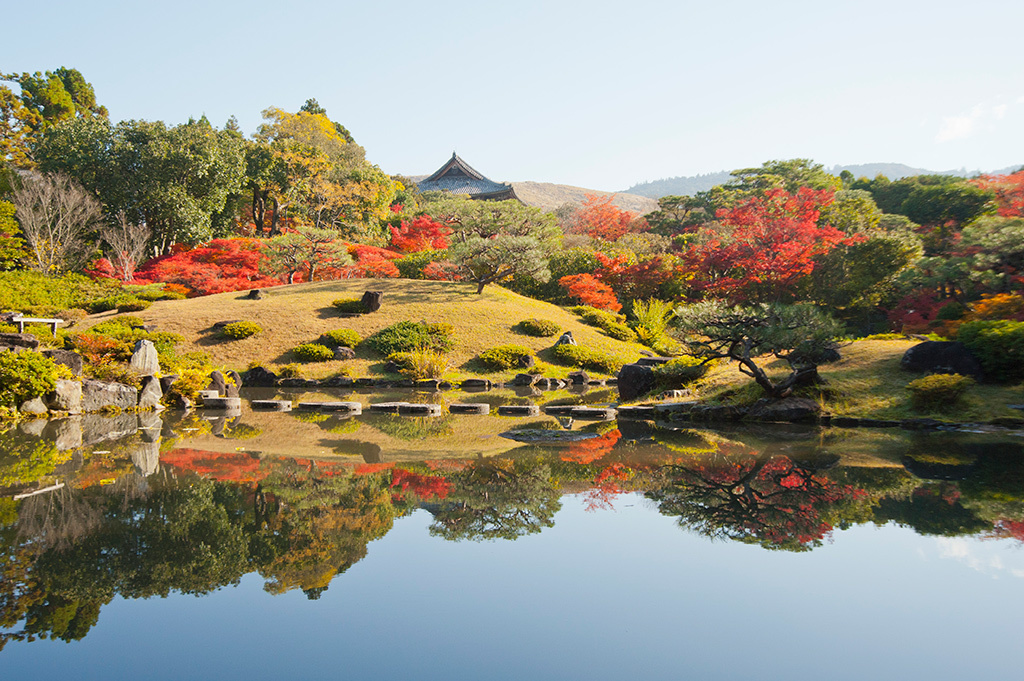 In December when there are few seasonal flowers, the pine needles create a sense of elegance. 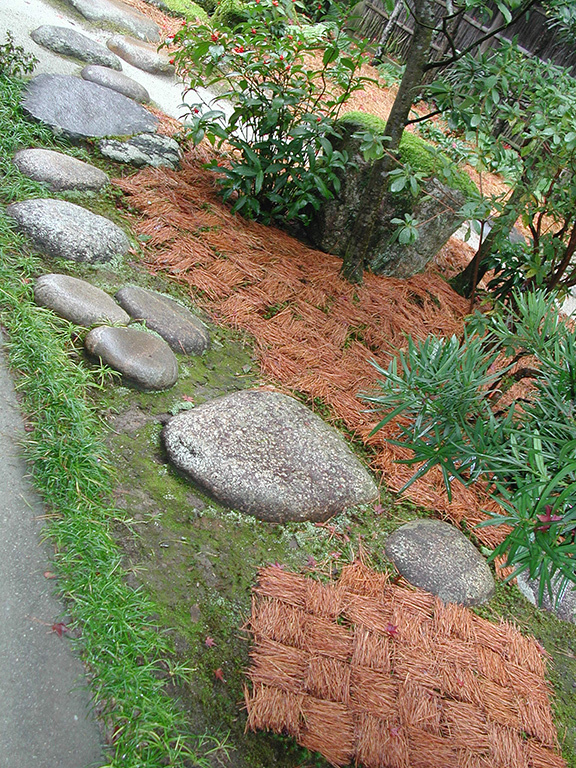 However, if I would be so bold as to make a personal recommendation, the best season would be when the fresh green leaves appear from early to late May.
During the flower season, each flower blooms one at a time, but during the season of fresh verdure, everywhere is beautifully painted in bright green. 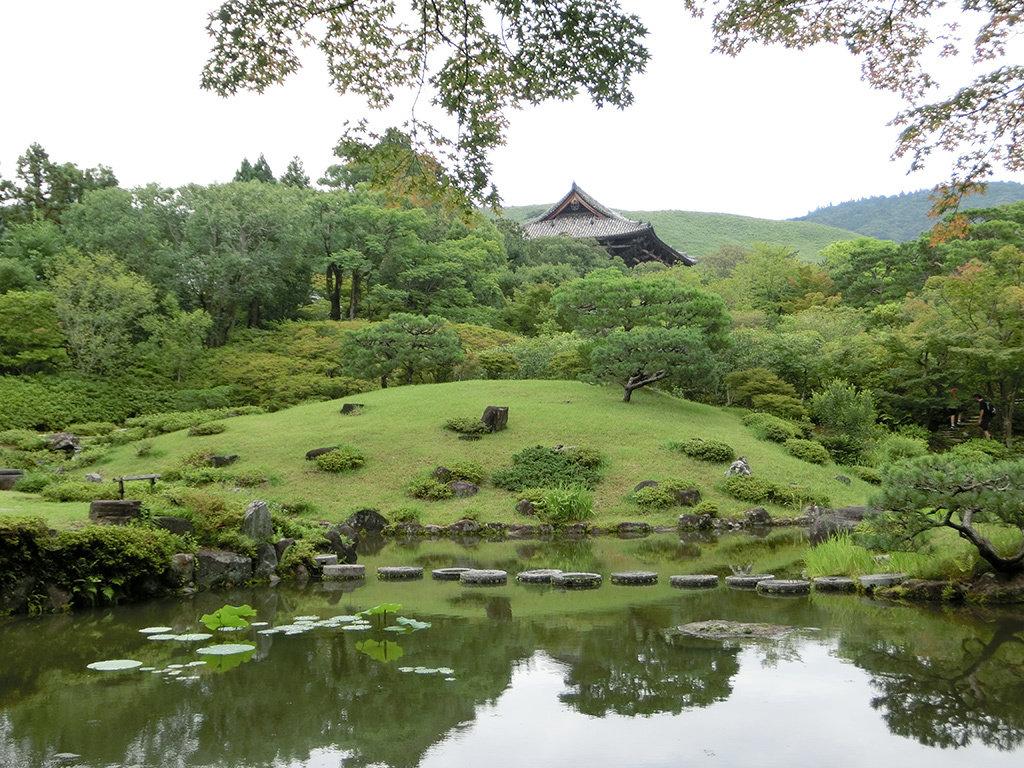 And since the garden makes use of the surrounding scenery, you can also see Mount Wakakusa shining green.
By the way, Isuien opens up towards the east.
This means the early afternoon is the best time for taking beautiful pictures, since the gardens are backlit in the morning and in the afternoon,
the shadows get longer and the pond in the foreground is put into shade. 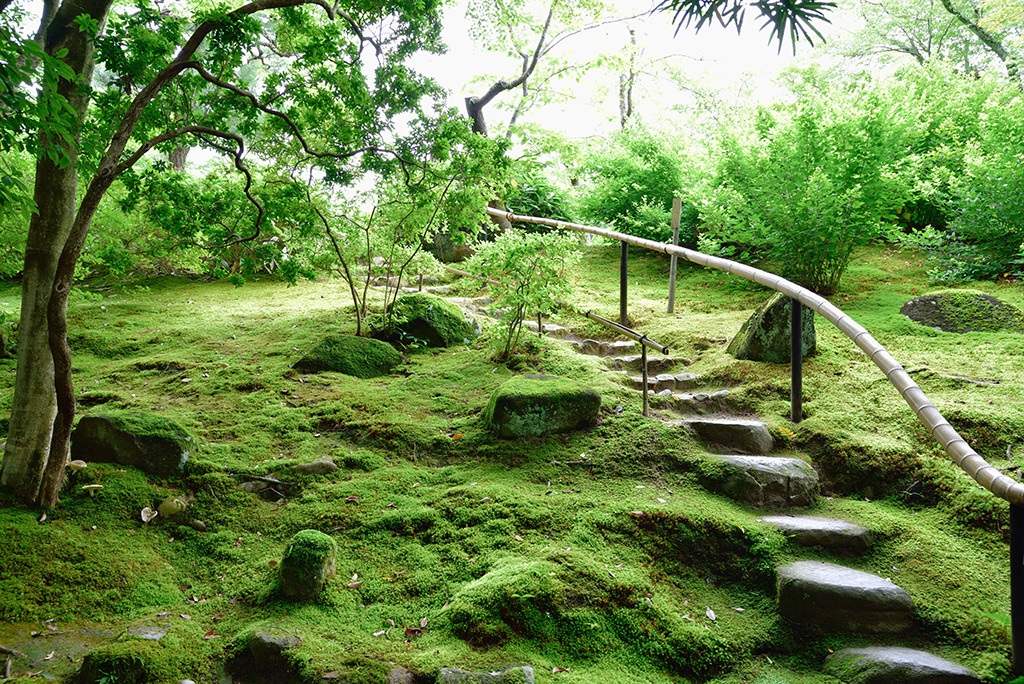 So, how about it?
Don’t you think it would be a waste if you were to assume you have experienced the city Nara without ever seeing these beautiful gardens,
and only visiting temples like Todaiji and Kofukuji?
Without a doubt, you should definitely add Isuien Garden to your sightseeing plans for Nara.