・The town once boomed in manufacturing a pigment known as “Bengara” or red oxide.
・The roadway reminds you of the extravagant livelihood of rich merchants in the Edo Era.
・The overall feel of retro is attractive in an overall unity of color balance.

One feels as if time-slipped! The nostalgic townscape is lovely as sofrichly dyed in the Bengara color

The Fukiya District amid the calm hillside of Okayama Prefecture now buried in greens is a town of rich merchants
who amassed a fortune manufacturing Bengara.
The way the roofs all turn bronze in the image of Bengara is Fantastic, creating a world of retro and nostalgia to charm your eyes. 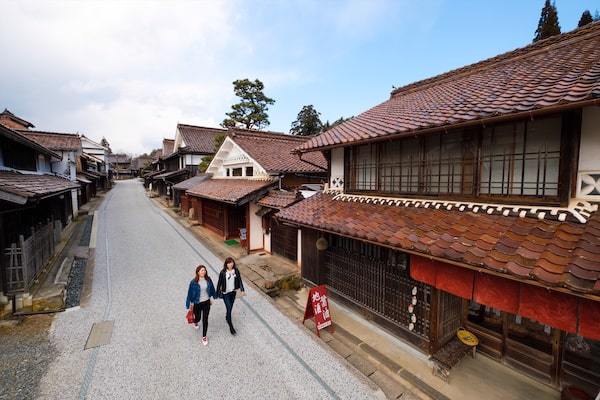 Photo: By the courtesy of Okayama Tourist League

Bengara, spelled in Japanese 「弁柄」 or 「紅殻」, is pigment of bronze color composed of ferric oxide unearthed in the form of haematite.
The name Bengara derives from India’s Bengali region.
The pigment has a long history dating back to the Palaeolithic Era broadly used in murals. 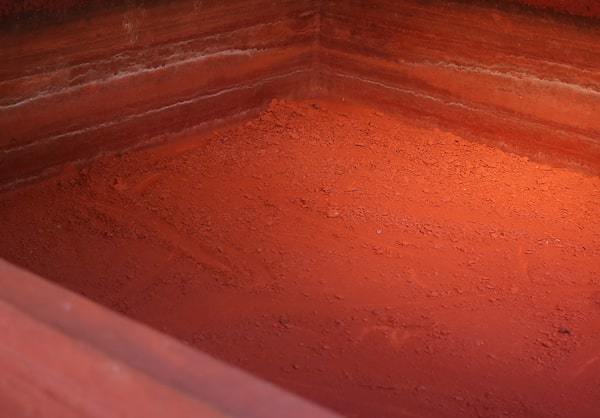 Bengara, said to be the oldest pigment, reached Japan ages ago and rooted deep in Japanese livelihood.
You can trace far back into history to the Jomon Era, Japanese late stone age,
to see Bengara was already used in coloring earthenware.
Bengara is highly resistant to secular variation and discolors gradually to afford you to enjoy brilliancy long enough.
Its antiseptic and rust-preventive characteristics helped broaden its use in lacquer ware, pottery and various houses. 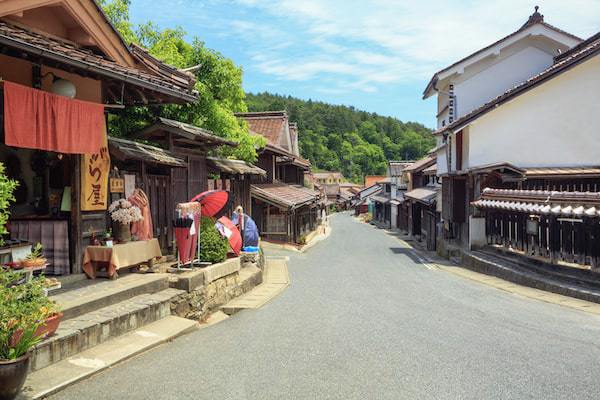 How have the Bengara-colored roofs come about?

The Fukiya District initially developed in the process of exploration of a copper mine.
Later in 1707 in the Edo Era, pyrites were extracted from the riprap and made into Bengara for the first time in Japan.
The district thrived ever since as a Bengara Town up until the Taisho Era. 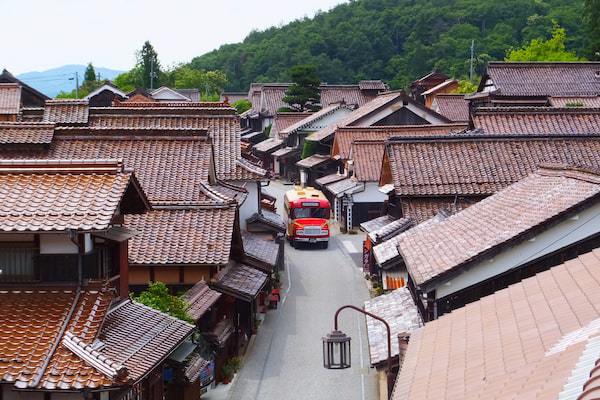 Fukiya Bengara, noted for its brilliance in application, was traded at a high price as an ideal coating material for pottery and lacquer ware.
Its quality is said to be so high as to withstand modern chemical scrutiny, “When color goes, nothing beats Fukiya Bengara”. 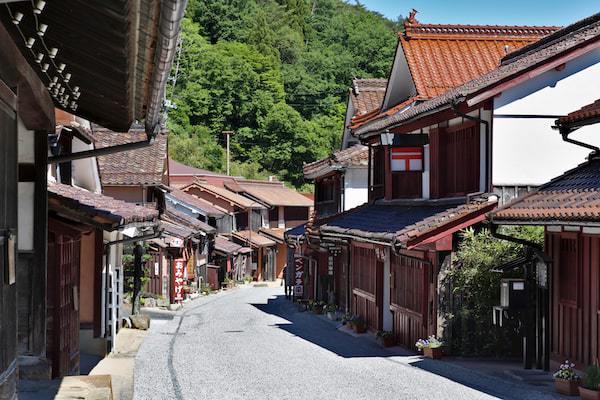 In the late Edo Era, rich Bengara merchants spent the huge profits made of the manufacture of Bengara
not to erect gorgeous residences of their own but to stuck with a concept of painting the whole town Bengara.
The kind of city planning of today was already in practice back in the Edo Era.
That must have been quite a progressive notion then. 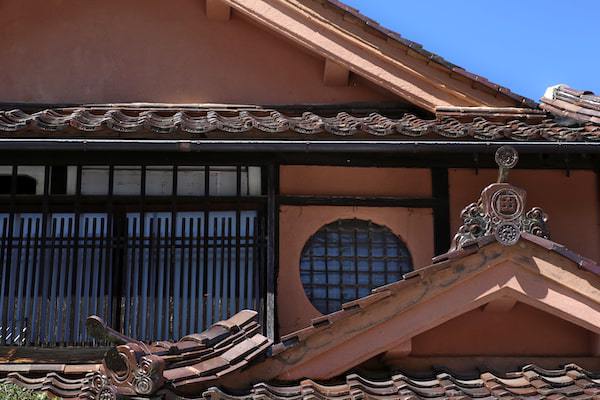 The houses in the Fukiya District were built solely by the carpenters and tile layers brought in from Sekishu, latter-day Shimane Prefecture.
Atop the roof were laid bronze-color Sekishu tiles, lattices and lacquer walls in brilliant Bengara,
and the designs on pillars and doors were similarly done in exquisite Bengara – all betraying the high level of artistry of craftsmen in those days.

The 1.5 kilometer-long street is beautiful, flanked on both sides by such buildings as readily remind you of the spirit of those Begarara merchants.
In 1977, the area was designated one of the important preservation district of historic buildings.
This “red-colored town” has often appeared in the backdrop of many a movie, a
nd as you stroll along the street, the image of red walls against while walls would make you wonder how strange a world you have walked in.
Looking up a bit, you see a stream of tsuma-iri and hira-iri roofs rhythmically stretching on.
It is fun to observe the way the entrances are built in either way.
Onigawara or gargoyle tiles bear unique family crests, and it is another fun just to compare one from another. 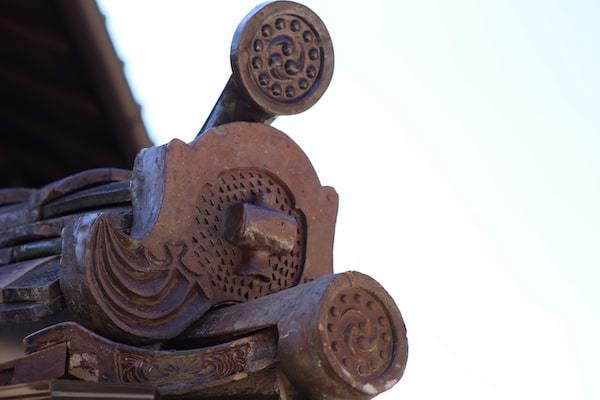 This post office built in the Meiji Era has attractive features, enough to tempt you to send letters instead of apps and e-mail. 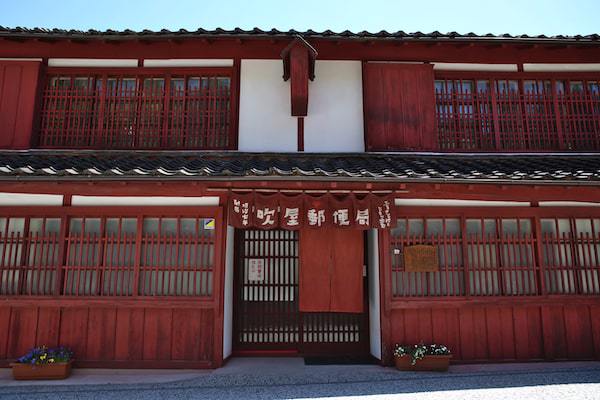 Strolling along the street in Fukiya District,
you will hear the folks in the best days of the town and feel a gentle passage of time in the row of houses along the way.
Incidentally, these houses are actually “lived in” by local folks even today.
So, kindly observe manners when strolling.
The township has features other than the rows of houses.
Tourist spots are abundant here. Allow us to introduce a few:

Souvenirs Shop・Try-It-Yourself Corner.
You can buy a rich variety of Bengara products here and also have fun dyeing your own Bengara items:
coasters, handkerchiefs, T-shirts, and so on for a fee of only ¥800~.
You can try Dorozome (mudding) by soaking a towel or stall in the Bengara liquid for ¥2500~. 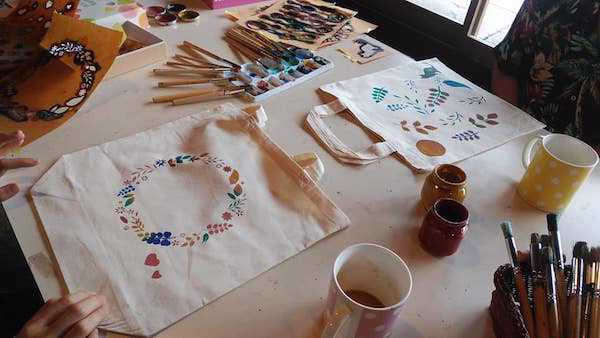 It must be fun creating your own original items for souvenir back home.
Opning hour is 11：00-16：00.

This is a historic structure.
The Katayama manufactured and traded Bengara for over 200 years since its funding in 9th year of Horeki(A.D.1759).
The residence is itself a museum exhibiting gorgeous tatami rooms.
It’s fun to see elaborate transoms featuring exquisite designs all over. 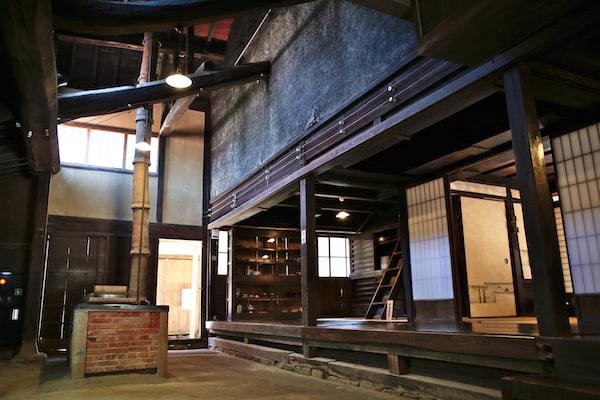 Father inside the main structure is a row of auxiliary chambers exhibiting materials showing how the Bengara work operated in those days.
The admission, valid also for visiting the adjacent “Kyodo-Kan” (Local Hall), is ¥500. 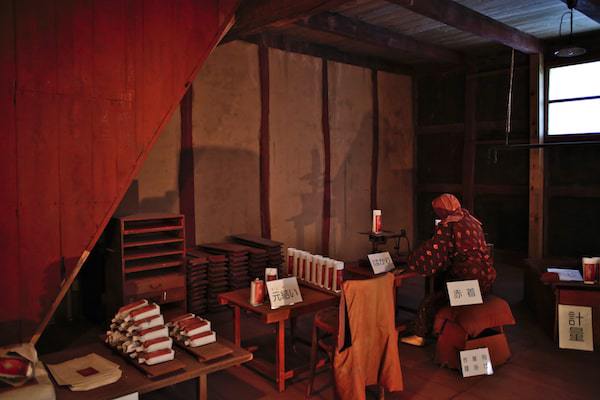 This stands across from the Former Katayama Residence.
Kyodo-Kan is the residence of a branch family of Kakichi Katayama, general manager of the family of the Bengara Potter, Asajiro Katayama.
The residence has various tricks built in doors, shelves, and corridors to appear as if a Ninja house come alive. 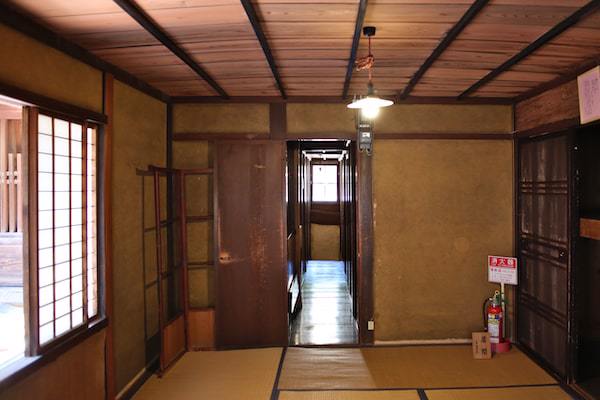 About 15-minute walk from Fukiya Furusato Mura takes you to Sasaune Roadway,
the headway into the Yoshika (Fukiya) Copper mine where the raw material of Bengara, magnetic pyrite was mined. 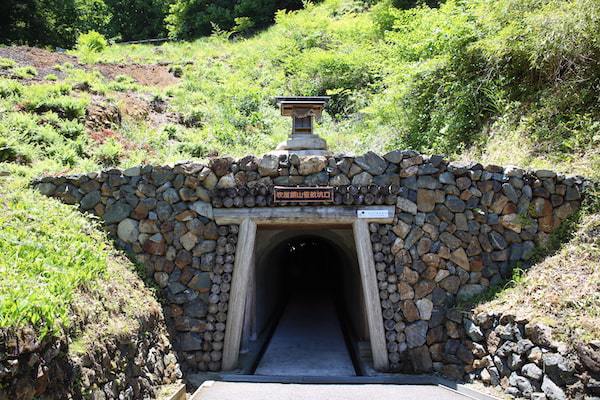 This is a restoration of the original copper mine actually used since Edo through Taisho,
and today stands out a popular tourism spot.
Please watch out your heads as the alley way is narrow.
Admission: Adult ¥400 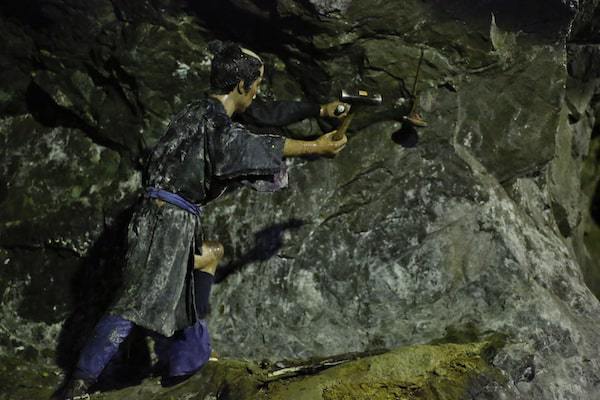 If you want to learn more of Bengara, do visit Bengara-Kan

The Bengara industry thrived in Fukiya over the period from Edo through Taisho,
and it died off in late 1974 with the closure of the copper mine in 1972. 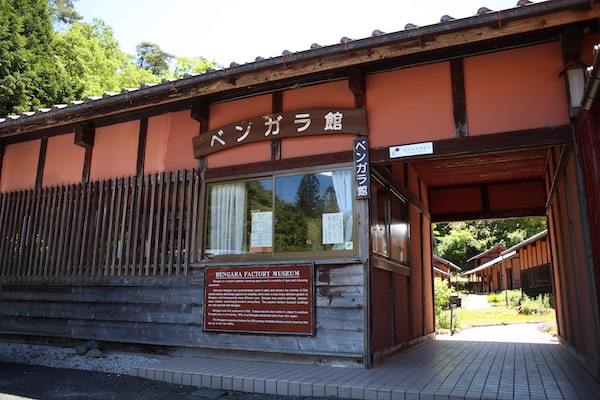 Bengara-Kan is a replica of the Bengara factory in Meiji period.
You can visually learn how the factory workers used to manufacture Bengara.
(Admission: Adult ¥300)

A castle-like structure here is also something to see.
It is the Hirokane Residence, the house of a village headman Hirokane.
The Hirokanes amassed a huge fortune running the Koizumi Copper Mine and manufacturing ferrous sulfate. 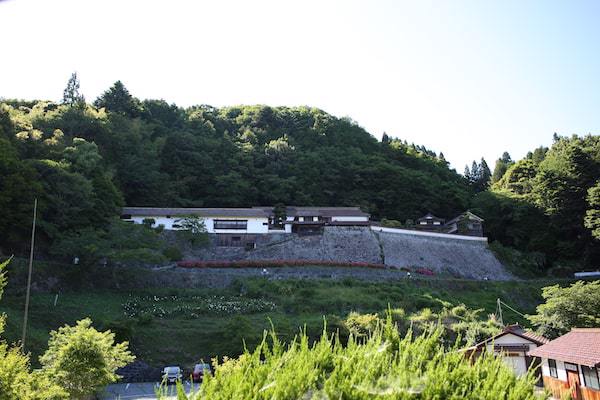 For those of you wishing to study closer, an excursion ticket is available for ¥1000 (adult)
to cover Former Katayama Residence, Kyodo-Kan, Sasaune Roadway, Bengara-Kan and Hirokane Residence.
You can purchase the ticket at the booking office of any of such facilities.
The row of houses painted in brilliant red is a scene rarely found elsewhere.
Why not take a while to stroll along the nostalgic town that reminds you of good old days?