・An broad expanse of coastal sand dunes that extends in an area 2.4 km north-south/16 km east-west in Tottori Prefecture.
・ A gorgeous view overlooking the sea from atop “Uma-No-Se" (Horseback)
・ Camel-Ride will give you a moment of desert life. (¥1500 for one; ¥2600 for two)

One of Japan’s great natural spots

Japan abounds in just as many great natural spots as the other countries of the world.
Do you know a great one of them – Tottori Sakyu?
Having seen it once with your own eyes, you can’t help telling your pals how magnificent it is.
You’ll even wonder how Japan could ever have had such a gorgeous scenic sight to her credit.
That could well be a whole new ball game for your journey “Discover Japan”. 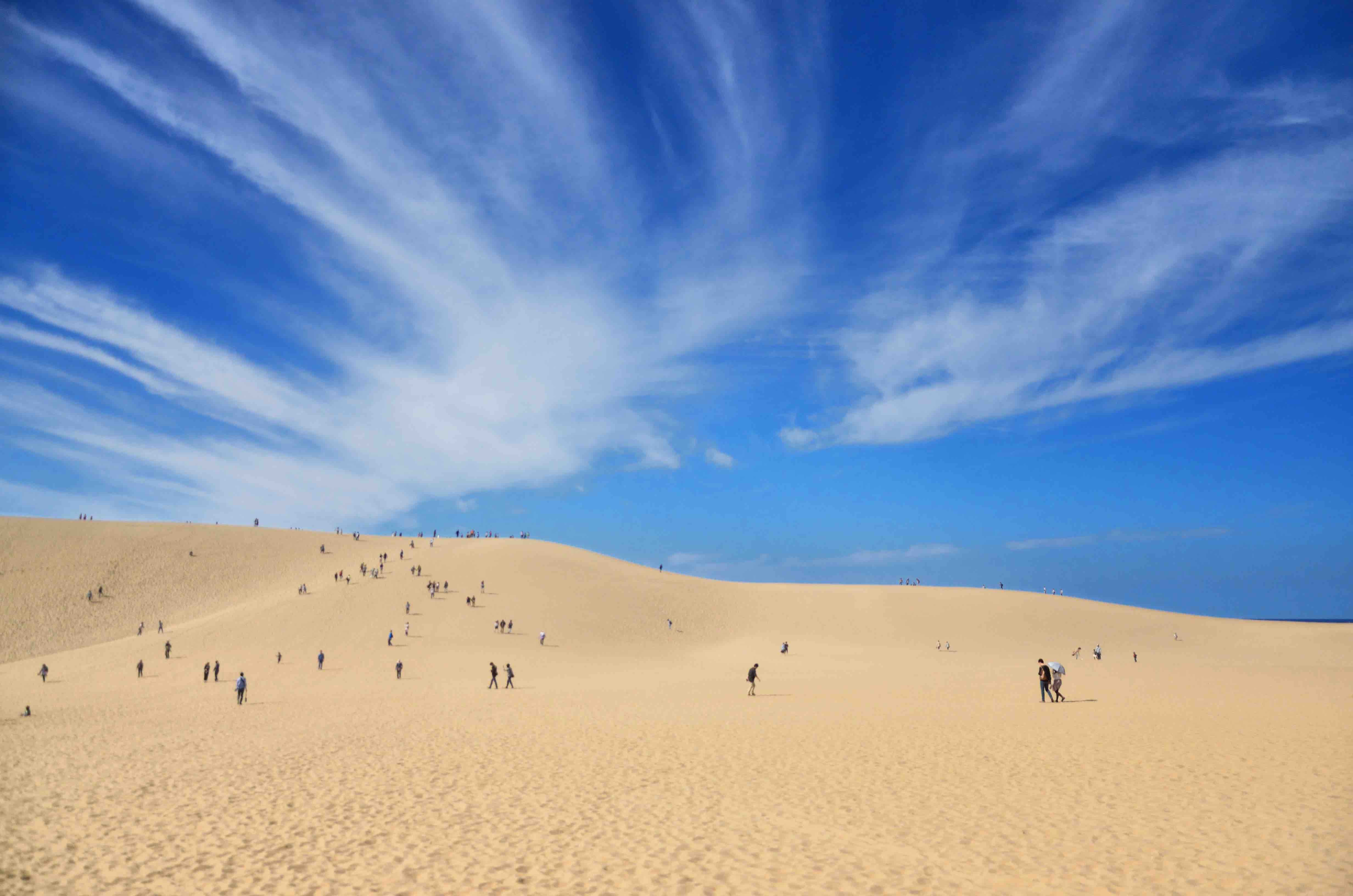 Tottori Sakyu or Tottori Sand Dunes may be accessed by car either from JR Tottori Station or from the Tottori Airport in a matter of 15 minutes either way.
The site is only 7 km away from the center of Tottori City, impressively close to the civic life.
Tottori Sakyu extends over a huge expanse of the Japan Sea coastal area along Tottori, Tottori Prefecture,
where ages of deposition of sand blown into by dry winds have formed along the Japan Sea coast what is known as Tottori Sakyu or sand dunes.
2.4 km north-south by 16 km east- west, Tottori Sakyu is the largest tourism-worthy sand dunes in Japan. 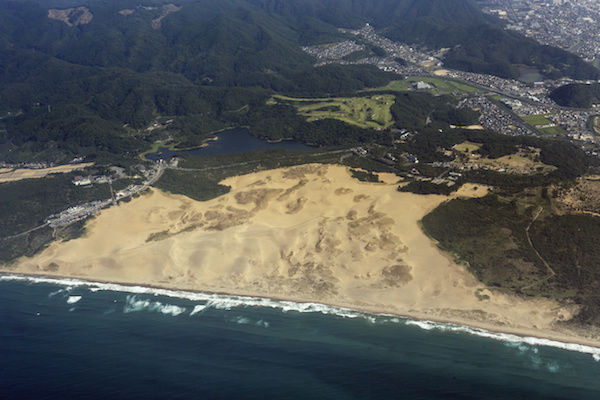 Why “tourism-worthy”? Well, as a matter of fact, Tottori Sakyu is not the largest in size – 2nd largest, actually.
*The largest in size is Sarugamori Sakyu in Higashidori-mura, Shimokita-gun, Aomori Prefecture, off-limits to the public,
as it is concurrently the site of Shimokita Testing Range (trajectory testing range) of the Ministry of Defense.

The History of Tottori Sakyu

Tottori Sakyu had never been a tourist spot from ages past till after the end of World War II, mostly just a barren expanse of wild nature.
In a questionnaire taken by the local newspaper in 1927 Tottori Sakyu was not even among the eight tourist sites in Tottori,
and even thought to be a nuisance as an area not worth touring.
Tottori Sakyu was disposed of by the state right after the war when the whole nation was starving.
Private houses amid the sand dunes were annoyed by sandstorms blowing in from the dunes, so much so that projects were launched to afforest the area.
The projects were made obligatory for a period of 20 years from 1952 through 1972. 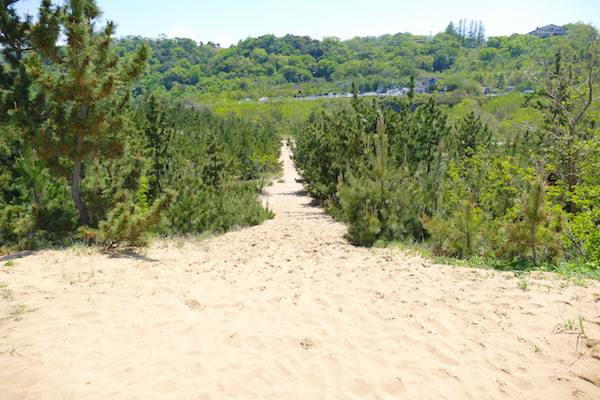 The City of Tottori embarked on years 1972 and 1973 on lumbering 15 hectares of conservation forests west of the sand dunes
to set a foundation for what has come to be known today as Tottori Sakyu.

Most of you will probably visit Tottori Sakyu by car. Rest assured, there are more than plenty guiding posts to show your way to the sand dunes.
Of the several parking lots up in Tottori Sakyu, the one closest to the sand dunes is fee-charging.
Parking lots of the gift shops and eating joints on the other side of the road are basically free of charge and may be fee-charging depending on the seasons you visit.
A routine bus service is available from JR Tottori Station.
You are to take Hinomaru Bus for “Tottori Sakyu (Sakyu Kaikan)” and get off at the end of the line.
It takes about 25 minutes and the fare is ¥370.
By the way, there is a minor plateau on the other side of Tottori Sakyu called “Tottori Sakyu Oasis”.
You are to take the lift to get up there, wherefrom you can enjoy a panoramic view of Tottori Sakyu. 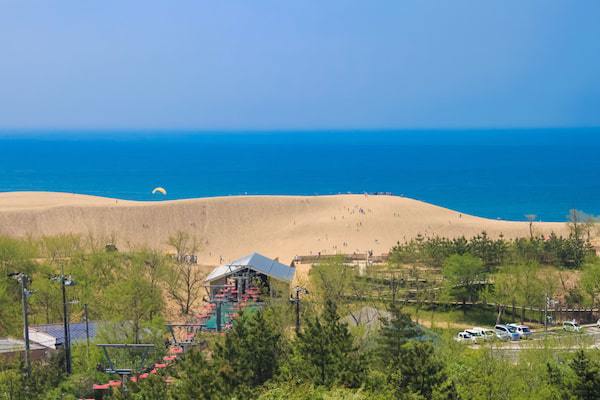 Then, you can go up to the gate to Tottori Sakyu from there.
So, we advise you to take time to get up there on your way to the seaside of Tottori Sakyu. 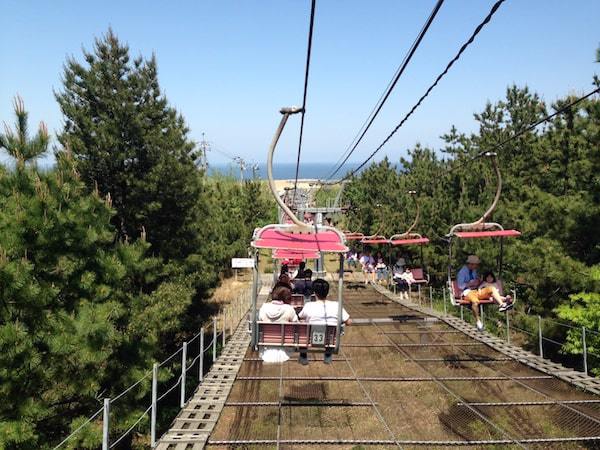 Now, are you ready to head for Tottori Sakyu? 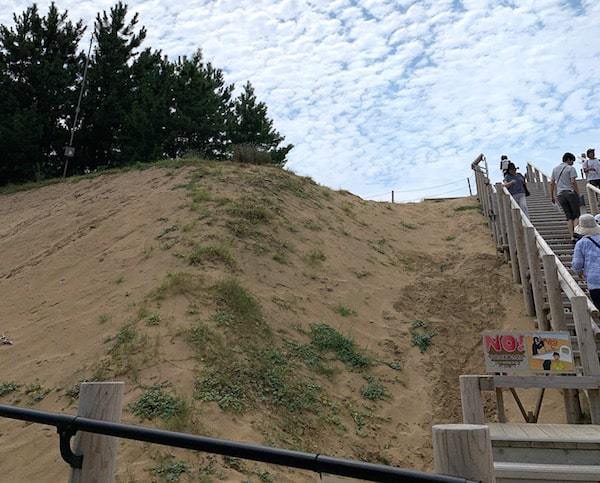 Tottori Sakyu is so huge that you may wonder how to enjoy it all.
Besides, you may be puzzled which activity to choose from such options as sandboard riding, Segway circular ride, etc.
So, let us familiarize you with some of the activities you can enjoy at Tottori Sakyu.

How to have fun at Tottori Sakyu

Just as huge as a desert, Tottori Sakyu has camels around to carry your around.
Let’s have a camel ride to enjoy the feeling of travelling in the desert.
Several camels (1-2) await you at the gate of Tottori Sakyu, ready to carry you onboard.
Be sure to enjoy a rare experience of camelback ride. 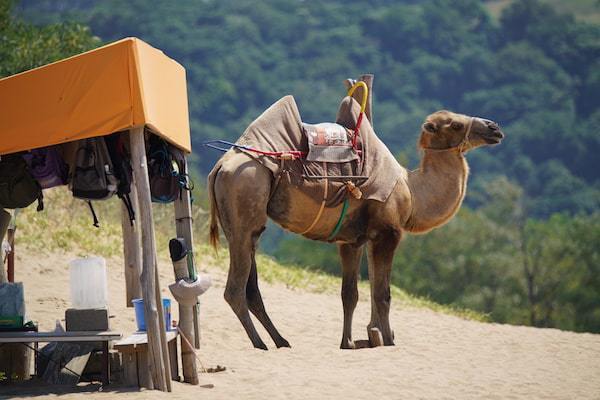 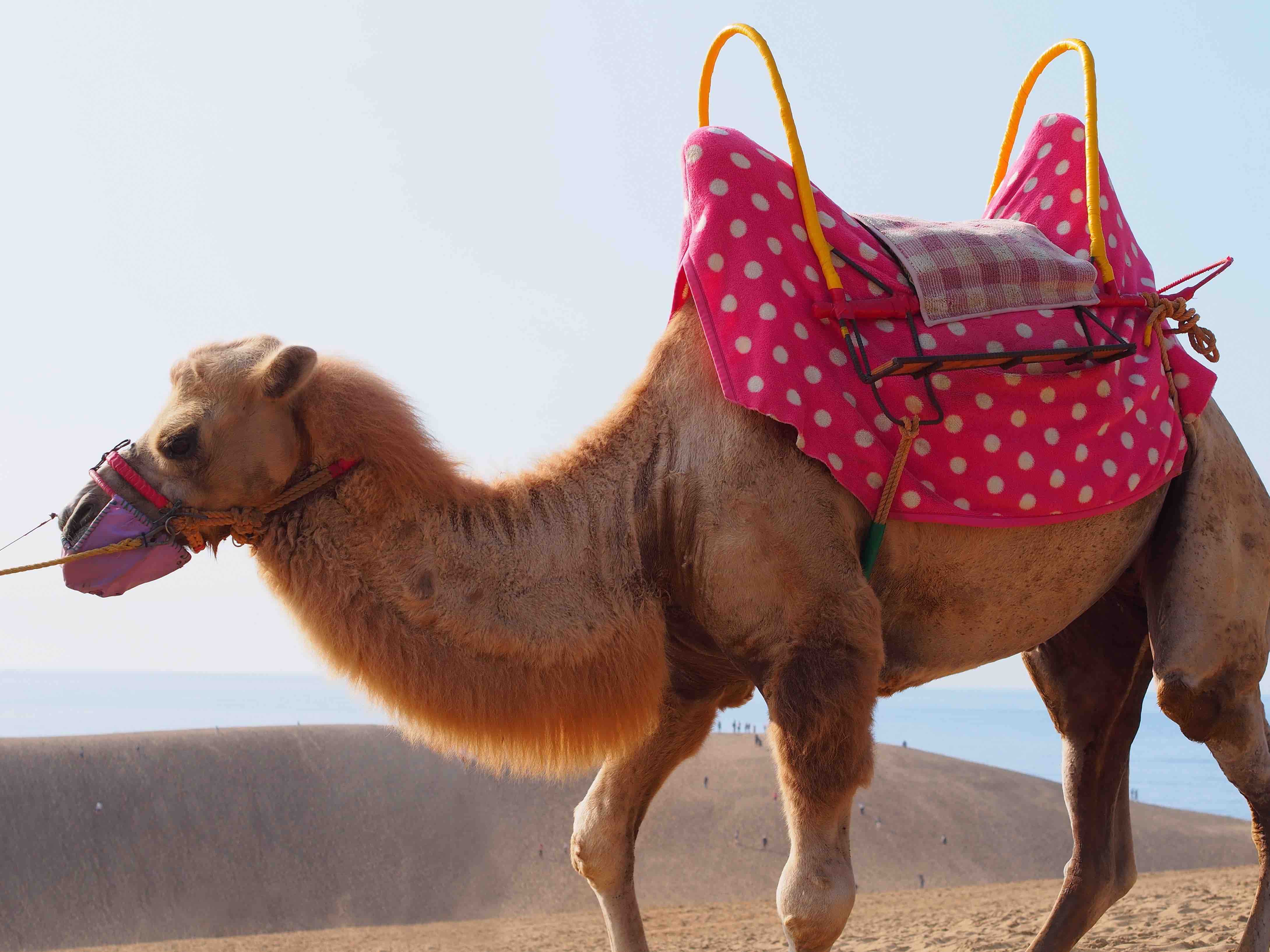 Please mark that no advance reservation is available.
Also mark that the business hours vary subject to the physical condition of the camels.
At the moment in 2021, six camels await at your service You’ll be surprised how high is the camelback, so much higher than you expect,
high enough to offer super photogenic views all around you. 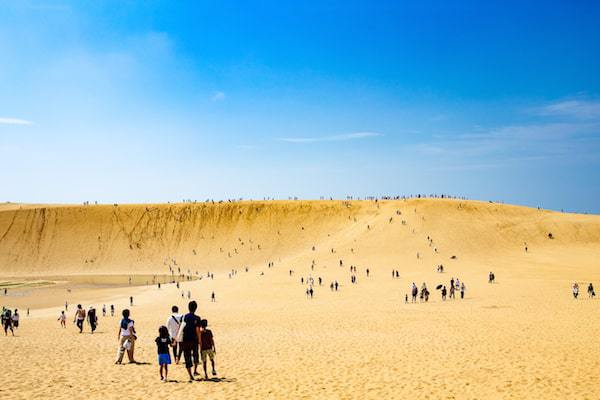 But then, once up there, you are sure to have that sense of accomplishment - having conquered “Uma-No-Se”.
So, let’s give it a try; one step at a time to reach the summit. 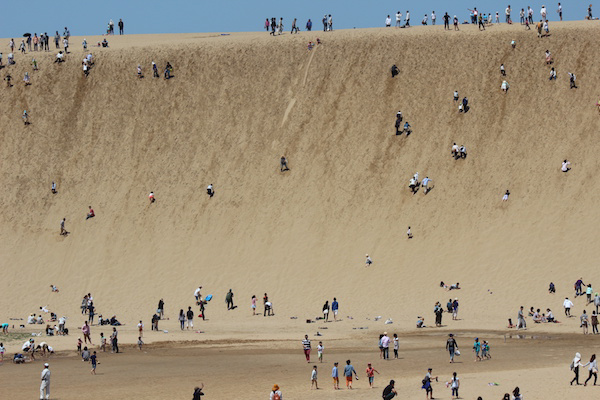 Give yourself a huge credit having managed to hit the peak.
It sure is quite a toil for those of you with little experience in mountain climbing.
Each step buring into the sand, it’s hard to step forward.
Having managed so many steps forward that way,
you should be proud of yourself and sure deserve moments of the most gorgeous pleasure of grand views ahead overlooking the sea. 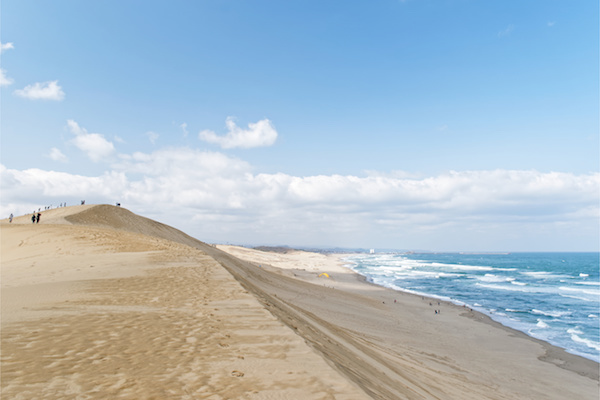 Right in front of you is a panoramic view of the Sea of Japan with the famed Torii (gateway to shrine) the Hakuto Kaigan (white rabbit beach) nearby and,
if the weather is right, Mt. Daisen commonly known as “Mt. Fuji in Hoki” rising yonder. 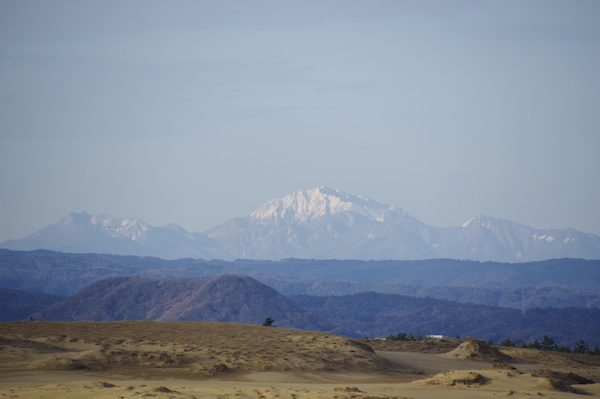 Uma-No-Se is about 50 meters high, as high as 15-20-floor buildings - high enough to afford you such magnificent views around.
If you are one of those rich in muscle power, here’s two extra ways to enjoy the occasion. 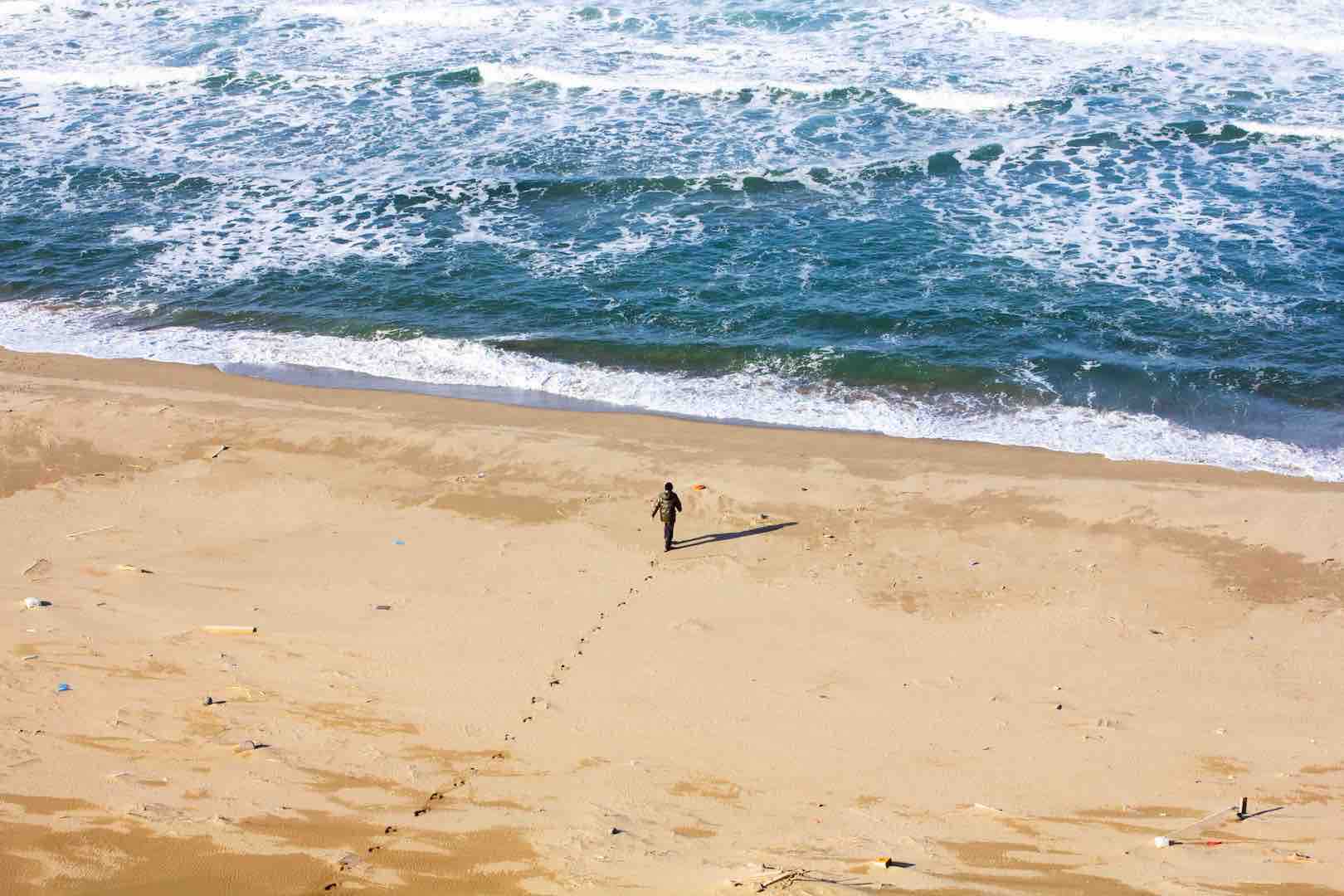 Get down to the beach

On the other side of Uma-No-Se, the beach side, is a sand slope to descend.
Why not walk down the slope to the beachside?
Few people attempt that sand descent, so you can enjoy being one of them.
Look up in the direction of Uma-No-Se, and you’ll be amazed by a beath-taking view – a view one can expect to see only somewhere abroad.
The slope is 30 degrees sharp; you walk as if rolling along down to the beach. 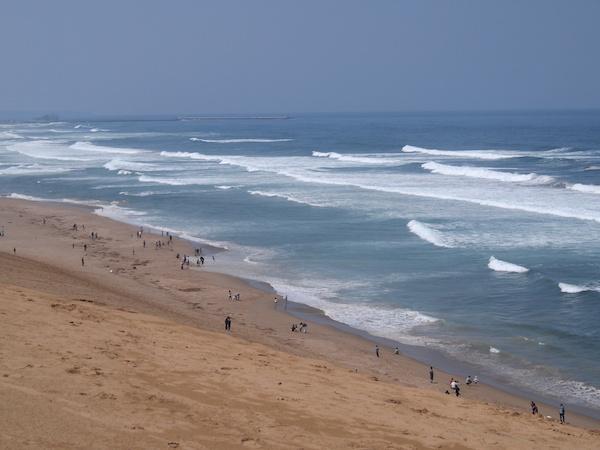 Run down the sand slope On your way down from the top of Uma-No-Se,
you can just walk step by step or run down in the direction you came up from.
Uma-No-Se is 50 meters high, and the sand slope way back is just as steep as the seaside at 30 degrees down.
Perhaps a bit shy being watched by the gallery around,
but you should dare try it out for the sake of a fantastic prize you’re guaranteed of – that is, a great exhilarating feeling at the completion of the rarest of challenges.
While you’re on the run, you would feel as if flying along. It’s an instantaneous activity – moving at a speed you would never experience running on a flat ground.
You’ll find that each step forward measures as broad as the one you would make in the running jump in track and field.
But then, what’s the point of hurting yourself running that fast. Be extra careful not to ever fall while running. 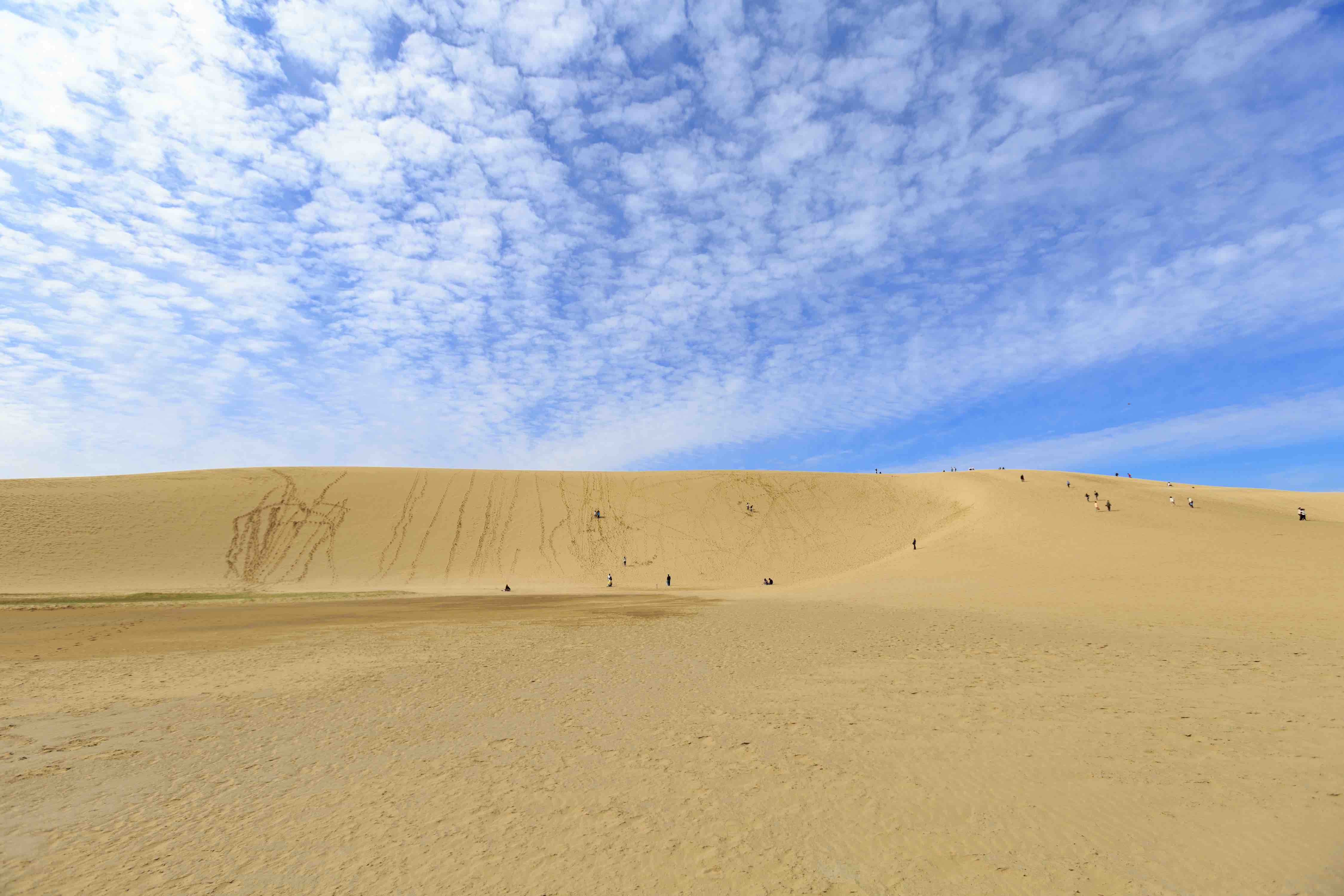 Tottori Sakyu is a world of nothing but sand.
You might think it’s the same sand dunes whenever of the year you may go visit, but that is grossly wrong.
Sand dunes show seasonal changes as they do.
Let us show you some seasonal charms of Tottori Sakyu.

Spring/Autumn: the best season of all that we recommend

Spring and autumn are the best of seasons after all.
Neither hot nor cold, the sand dunes feel comfortable to walk on.
In autumn, for instance, the high season having calmed down, the burning hot sand is a lot cooler; Uma-No-Se,
the highest spot in Uma-No-Se, is easier to walk about.
Oh, you shouldn’t miss the golden hours of sunset when you can witness the glorious moment of the sun setting yonder. 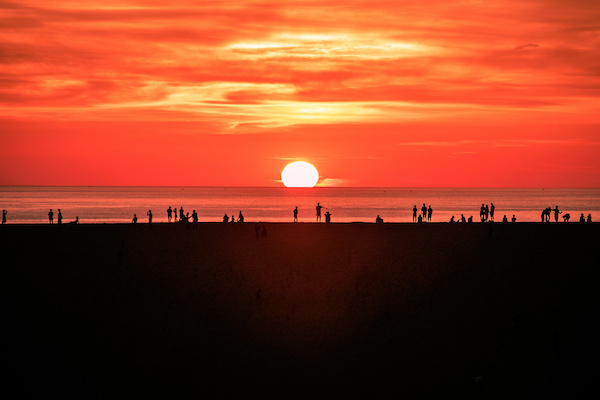 ・Summer: Sand nearly burn amid summertime, so those of you summer-phobia would stay way the sand dunes

I’ve visited Tottori Sakyu a few times in midsummer and know for a fact how hot the sand is at that time of the year.
Heat reflection is unbearably hot.
You do well avoiding summer.
If you do care to visit Tottori Sakyu in midsummer or cannot visit at any other time,
make sure to prepare yourself for heat stroke and have fun visiting a sizzling Tottori Sakyu.

・Winter: A world of snowscape

Winter is the season of freezing cold and Tottori Sakyu turns a world of grand snowscape – a charming scenery not seen in any other season of the year.
Visitors are scarce, which can be your reason for visiting Tottori Sakyu in winter. 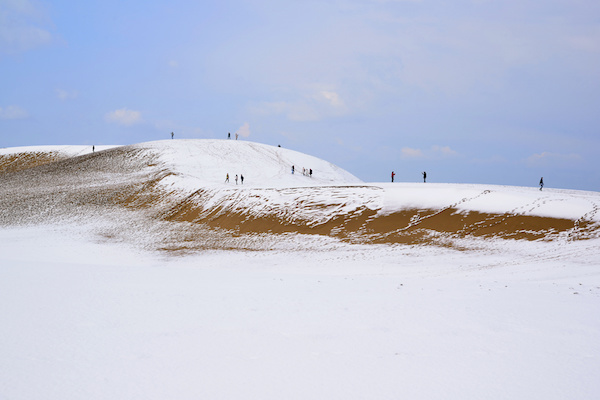 One point of warning:

Your shoes are liable to become dirtier than you expect, so you ought to come wearing your ready-used sneakers.
Sand chooses no footwears to sneak inside; there’s a footbath by the pay parking lot to wash your sand-spoilt feet.
Another crucial point: once in the sand dunes, you have no toilet to rush to.
Make sure to use the toilet ahead of time.
Of course, there isn’t any vending machine in the sand dunes.
As earlier mentioned, drinking water is a must in summer, or else you are bound to dry up to be a mummy.

Some tips for cute photo-taking in Tottori Sakyu

Finally, here’s a thought on timing for taking fine pictures in Tottori Sakyu. 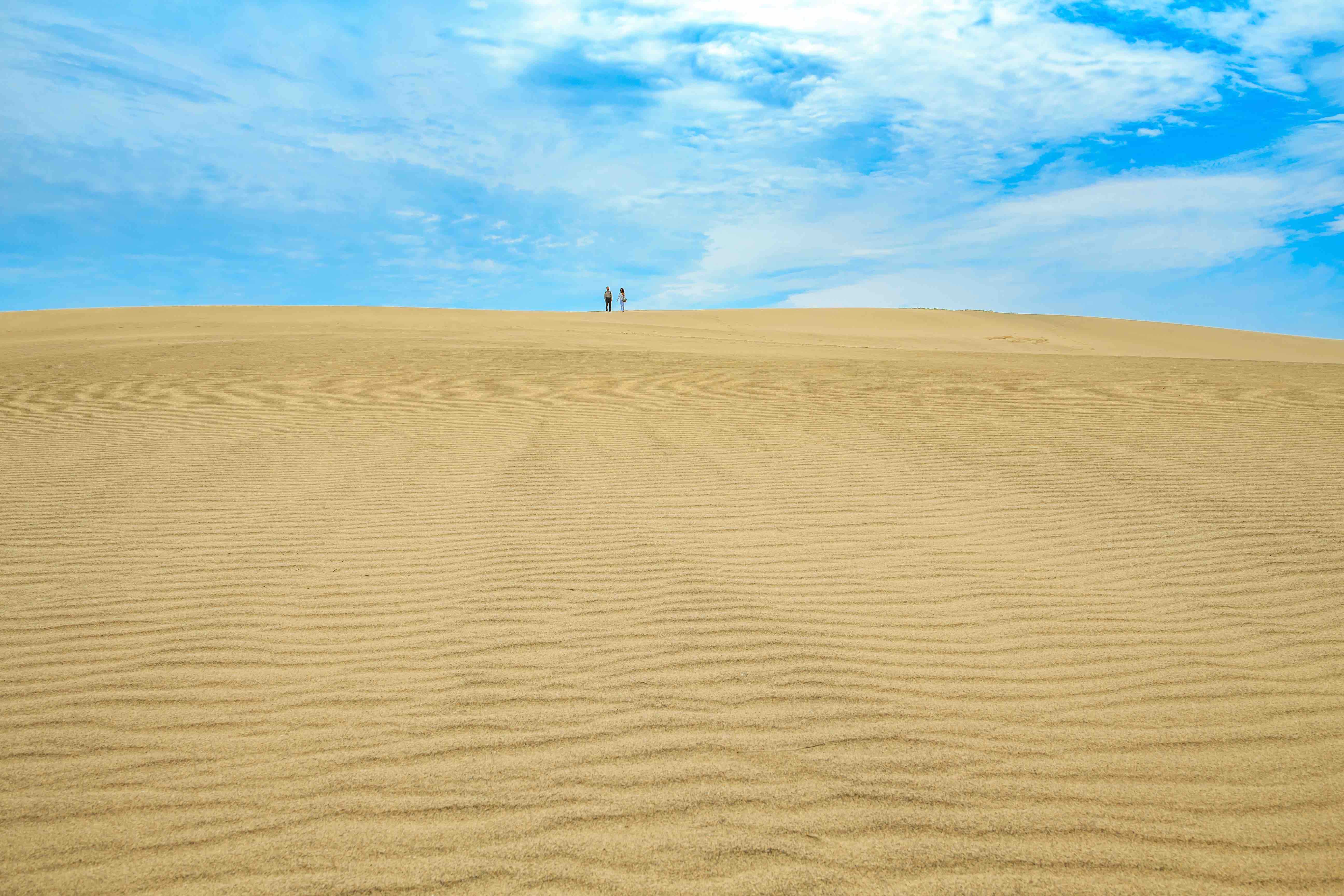 No footmarks early in the morning

Do try to go out there early in the morning when the sand surface is fresh and free of footmarks.
The sand dunes yet unspoiled seem to belong only to you – that’s photo-worthy, isn’t it?
Though different season to season, the rising sun always offers you the best timing for super photography. 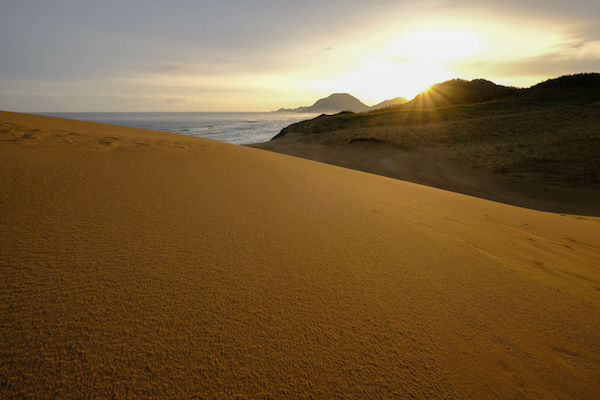 A day with strong wind blowing with a cloud of dust all around can be the ideal stage for extraordinary photos.
So dusty that you can’t keep your eyes open, but photos with sand dust blown up in the air can certainly be valuable.
Autumn or winter offers you such windy days. 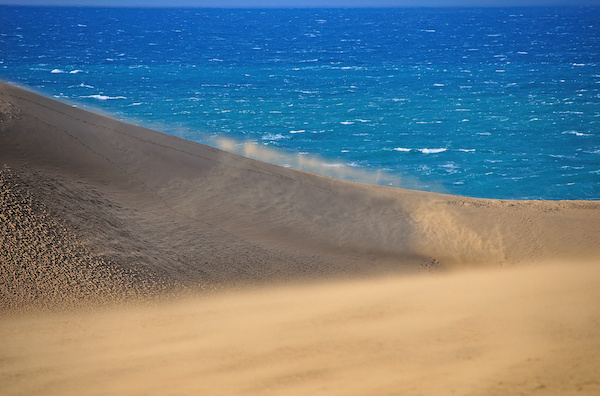 Tottori Sakyu is a desert or rather a unique place in Japan where you can feel as if tossed into the middle of a desert.
Tottori Sakyu offers you not only rare sceneries with sand all around but a variety of excitements - walking, camelback riding, picture-taking, and etc.
Do plan yourself a visit to Tottori Sakyu!