・You can see Toyama Bay and the Tateyama Mountain Range at the same time.
・From the coast or roadside station? There are two options to see it.
・The best time to visit is from February to April.
・A midwinter air storm named "Kearashi" is an extremely rare sight!

A spectacular view from the world's most beautiful bay

3,000-meter-high mountains seem to be floating on the sea...
Have you ever seen anything like this?
This fantastic scenery can be seen at the Amaharashi Coast in Takaoka City, Toyama Prefecture.
This view is listed in the "World's Most Beautiful Bay Club". 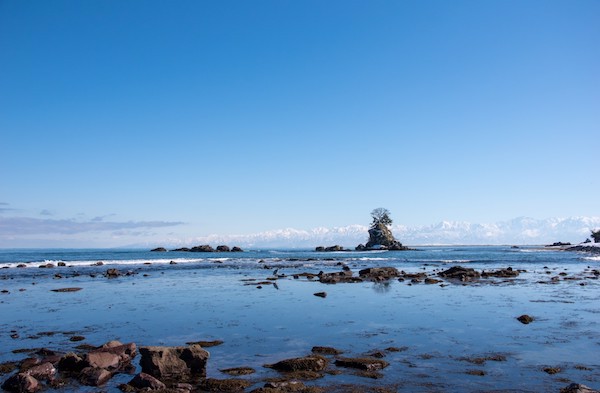 According to the Ota-Amaharashi Tourist Association,
there are three places in the world where you can see 3000-meter-high mountains from the sea.
1)The Alps visible from Genoa, Italy
2)The roof of the Andes seen from Valparaiso, Chile
3)The Tateyama mountain range seen from the Amaharashi coast
However, a recent survey has revealed that only the third one is visible.
I was curious about the reason why the other two were excluded, so I proceeded to investigate,
and found on the website of the "Beautiful Toyama Bay Club" that there is an analysis of the topographic cross-section of Google Maps,
and it seems that 1 and 2 were originally invisible due to their topography.
http://www.toyamabay.club/fascinating/index.html
In other words, Amaharashi Coast is the one and only scenic spot in the world. 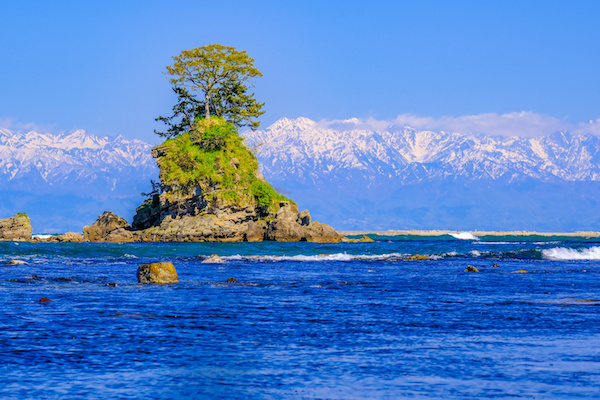 The best way to get to Ameharashi Coast is by train.
Take the JR Himi Line from Takaoka Station to Amaharashi Station (about 20 minutes).
With your back to the station building, walk about 100 meters to the right and you will see a signboard.
Follow the signs and cross the railroad crossing to arrive at Amaharashi Coast.
It takes less than three minutes.
Near the station, there is a huge panel for those who could not see the spectacular view. 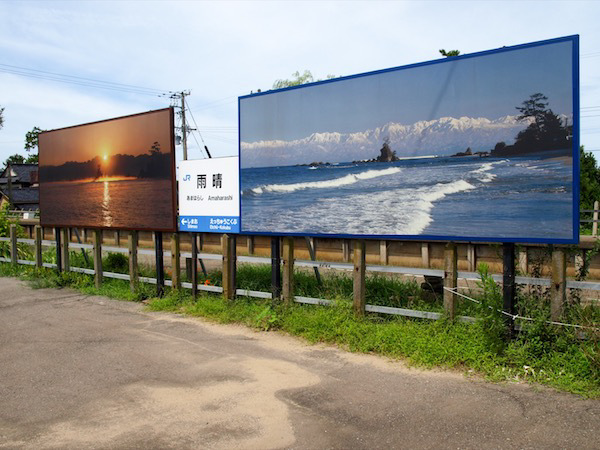 Incidentally, there is another way to see the spectacular view, besides the Amaharashi Coast,
and that is from the roadside station. 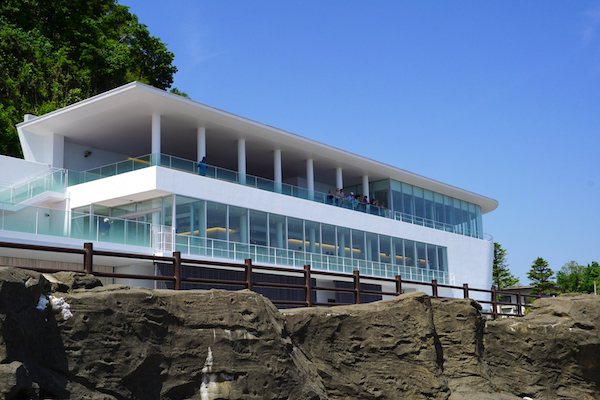 Toyama Bay and the Tateyama Mountain Range, the only place in the world with such a beautiful view

When you land on the coast, you will see a triangular rock in the sea.
Beyond the rocks, the snow-capped peaks of the Tateyama Mountain Range float in the sky.
The contrast between the blue sea and the white mountains is breathtakingly beautiful.
The rock in the middle of the sea with a pine tree growing on the top is "Me-iwa"(Female Rock). 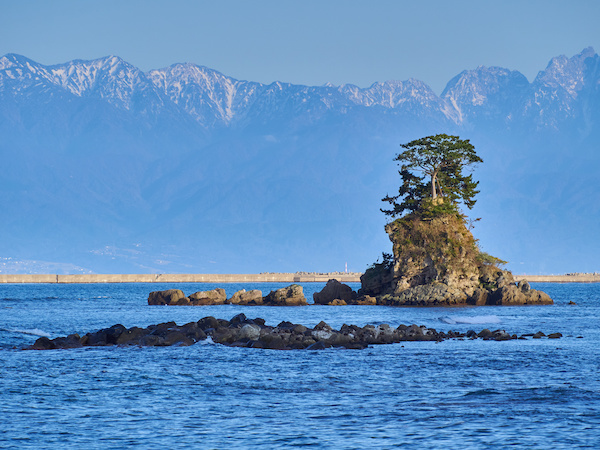 There are several smaller rocks around it, and it looks like a mother with her child, hence named "Me-iwa".
We are all familiar with the photo with the female rock in it.
There is of course a male rock too. 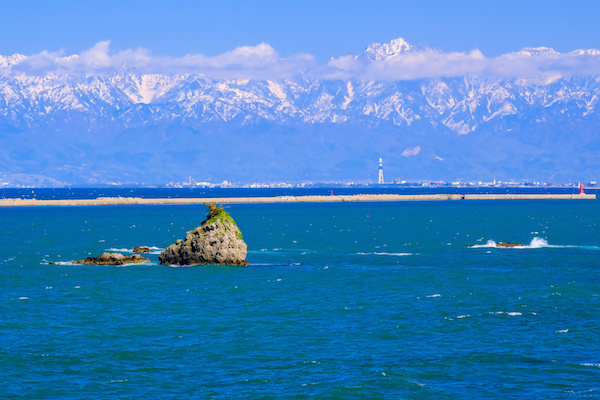 It was named "O-iwa" because of its majestic appearance, as if facing the rough waves of the Sea of Japan.
Incidentally, the roadside station is a three-story building, and the view from the observation terrace on the third floor looks like this. 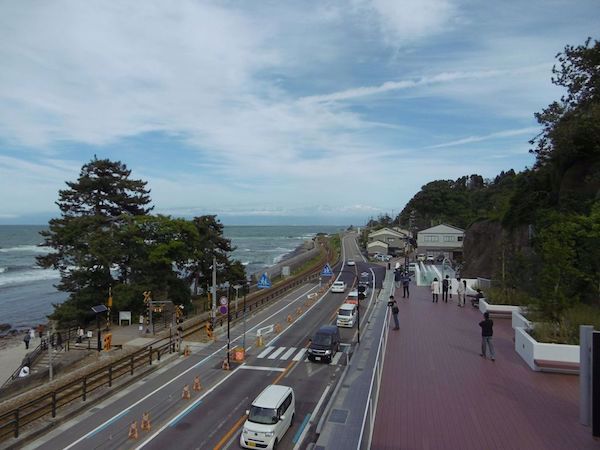 Yoshitsune-Iwa is on the left side of the road.
Yoshitsune-Iwa is a rock where Yoshitsune Minamoto, a warlord in the Heian period (794-1185),
waited for a sudden rain to clear up on his way to Oshu (present-day Iwate Prefecture).
This legend is the origin of the name Ameharashi Coast. 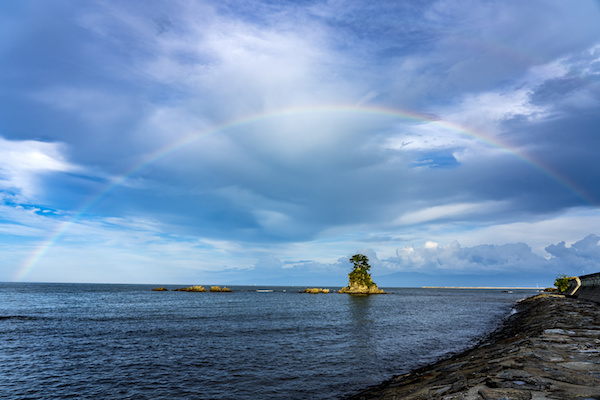 When is the best season to see the spectacular view?

The best period to see the spectacular view is from February to April.
The snow-covered Tateyama Mountains look divine.
The best time to see it is early in the morning, around 6:00 a.m.
The air is clear, so the contrast between the mountains and the sea is vivid.
It is not always possible to see this collaboration when the weather is sunny.
The best condition is that the air is clear. 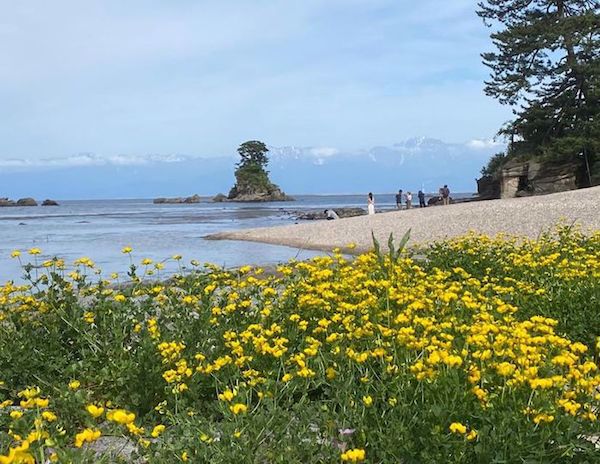 I visited this place in mid-May, and it looked beautiful even in the daytime.
The snow on the top of the mountain makes it even more spectacular.

How to take a great view photo? 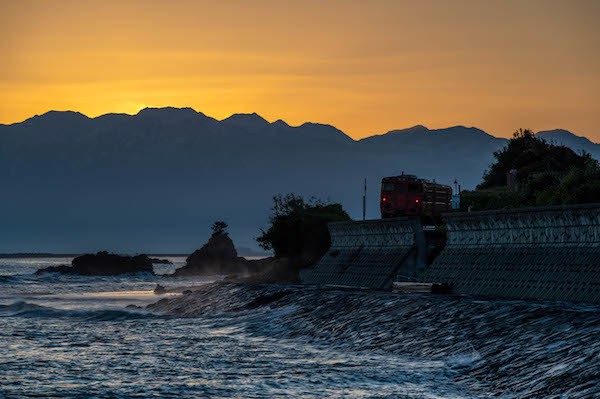 Don't you think it's quite fantastic?
The first train departs from Takaoka Station at 5:57 a.m. on the JR Himi Line.
It arrives at Amaharashi Station at 6:20 am.

The mid-winter offers you an amazing photo 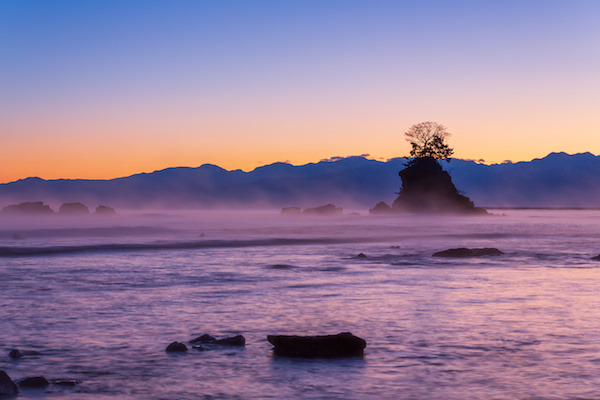 In Amaharashi Coast, you can see spectacular views all year around.
But in mid-winter is a special.
Because a natural phenomenon called "Kearashi" occurs.
When cold air from the land flows into the sea, the seawater is warmer, so the water vapor from the sea surface condenses rapidly, creating fog.
That air storm is "Kearashi".
The combination of the winter air storm and the Tateyama mountain range over Toyama Bay creates one of the most spectacular views in Japan.
The best time to take this photo is in the morning, but even the locals find it difficult to see.
This New Year's Day, too, I saw many photographers looking for a good shot. 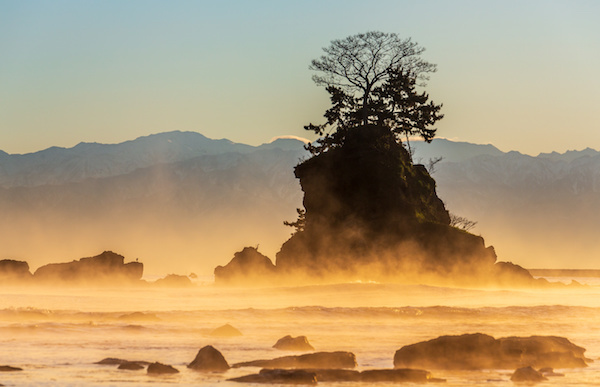 This is the only place in the world where you can see mountains at an altitude of 3,000 meters and a spectacular view of the sea,
and once you see it, you will never forget it.
Why don't you relax and enjoy the magnificent collaboration of the sea and mountains?