・The terraced rice paddies in Matsudai Area of Tokamachi City.
・It’s a breathtaking scenery that fascinates many a tourist and cameraperson from all over the world.
・It offers exquisite charms that subtly change by season and time zone.

I’m here today to introduce to you Terraced Rice Paddies at Hoshi Tōge in the Matsudai area of my town, Tokamachi.
It’s a whole set of rice paddy fields of all sizes, 200 in all, lying on a steep hillside.
You are sure to feel as if time-slipped over a hundred years.
It really is Japan’s landscape of the heart right before you. 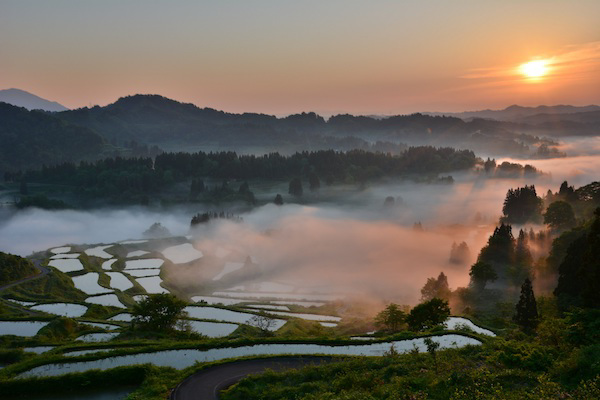 What is “terraced rice paddy”?

It is a unique type of rice paddy field terraced in the shape of a stairway on hillsides mostly in remote mountainous areas.
Tokamachi is renowned for a top-quality rice, Uonuma Koshihikari, harvested in the Matsudai-Matsunoyama district where beautiful,terraced rice paddies are found all over the place. 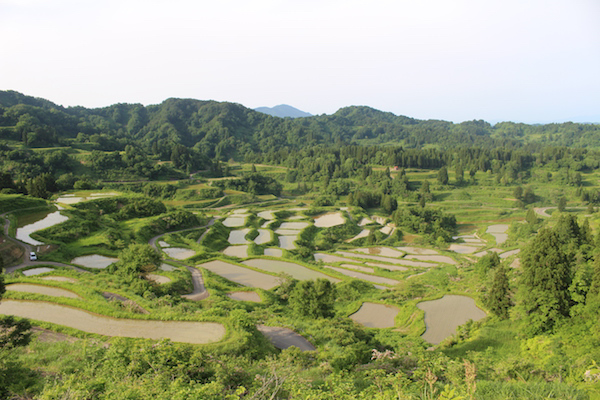 The terraced rice paddies in mountainous areas are suited for rice production thanks to temperature fluctuations from day to night.
But then, you can imagine how hard it is to manually grow rice in petty little paddies that reject any machinery.
It means the rice harvested here is costlier, labor-wise, than in flat fields down below.
So, local rice farmers cannot market their hard-earned rice too far out.
Yet, believe you me, the rise is of such a super quality that customers flood in from faraway places.
You can see how worthy the terrace rice paddies are to locality.

【The Functions of Terraced Rice Paddies】 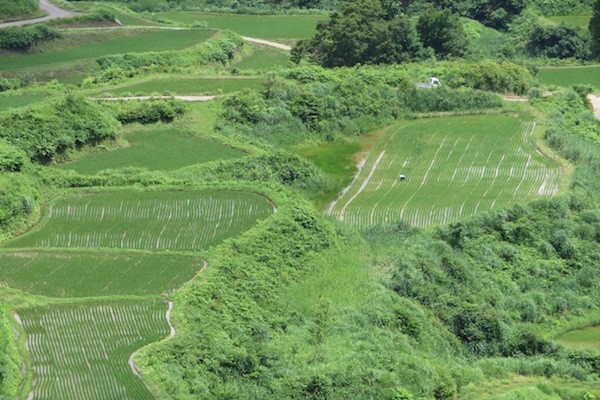 Tokamachi has numerous terraced rice paddies and the most popular one is at Hoshi Tōge or Star Ridge in Matsudai. 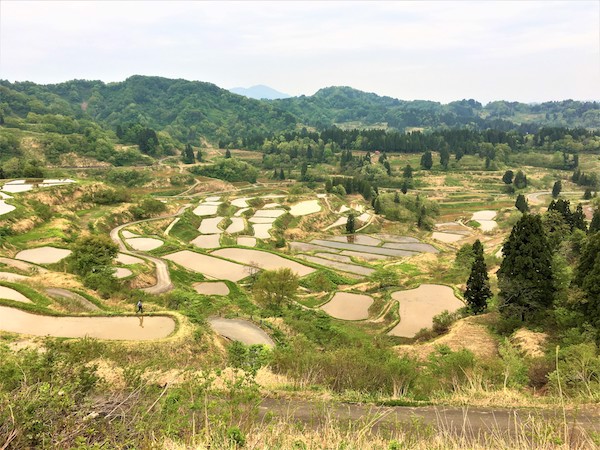 ◎Place
Hoshi Tōge is about 20-minute drive away from Matsudai Station.
As public bus services are not available, you are to either drive yourself or take a cab at the station.
Drive on R253 for Jōetsu, turn left at Ikejiri Intersection into R403 and drive on for about 15 minutes.
The terraced rice paddies are in a village called Tōge.
Watch out for an info signboard (see below) showing the entrance to the village.
Info signboard showing the way from R403 to Terraced Rice Paddies 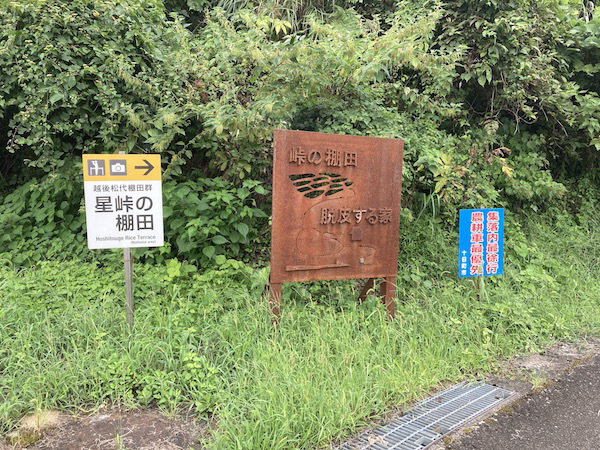 By courtesy of: (General Corporate Judicial Person) Tokamachi Tourist Association
You can overview the terraced rice paddies from where the village ends.
※ Be sure to drive slowly as the paths are rather narrow within the village!
◎ Parking Lot
The sightseeing tower and its parking lot are there along the path leading to Terraced Rice Paddies at Hoshi-Tōge.
As you go on driving on R403, you’ll come to the tower and parking lot.
Personally, I love the overview of the paddies from the sightseeing tower.
You’ll love it, too. 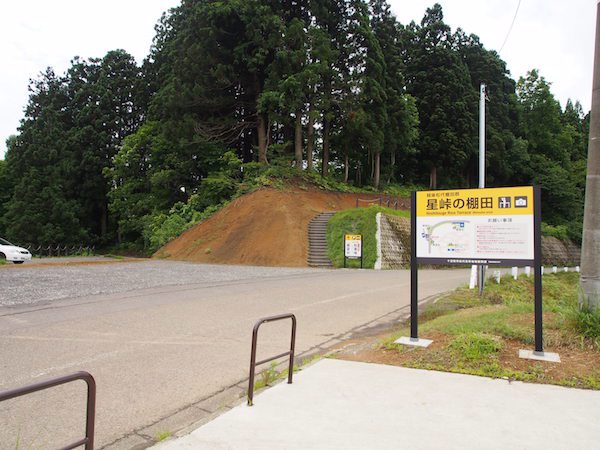 By courtesy of: (General Corporate Judicial Person) Tokamachi Tourist Association
Out of the parking lot across the path, you’ll find a sightseeing spot like this. 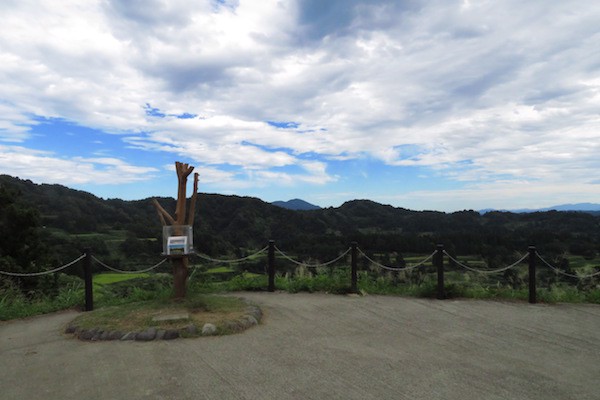 By courtesy of: (General Corporate Judicial Person) Tokamachi Tourist Association
Stand on the tower and face Terraced Rice Paddies at Hoshi Tōge right before you.
You are looking at a great panoramic view of terraced rice paddies! 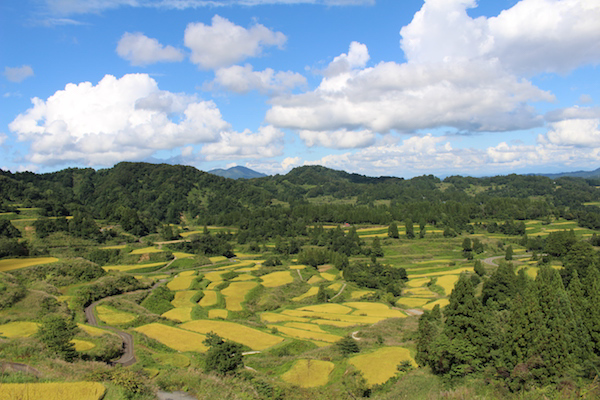 This is the spot flocked by many a cameraperson from all over Japan on fine days in late fall/ early spring for seasonal charms such as Mizukagami or the glassy surface of water.
200 meters beyond, there’s another sightseeing tower and a parking lot to go with it. 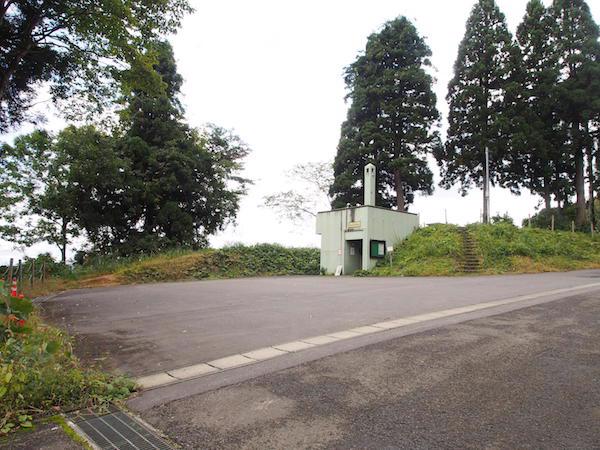 By courtesy of: (General Corporate Judicial Person) Tokamachi Tourist Association
The parking lot does have a toilet but only one for both ladies and gents. ]
Be prepared for heavy congestion in tourist seasons.
If I were you, I would first finish toilet at Michi-no-Eki Matsudai Furusatokan beside Matsudai Station and then proceed to the paddies.
※Terraced Rice Paddies at Hoshi Tōge is closed for overviewing and so is the toilet – due to heavy snowfalls. 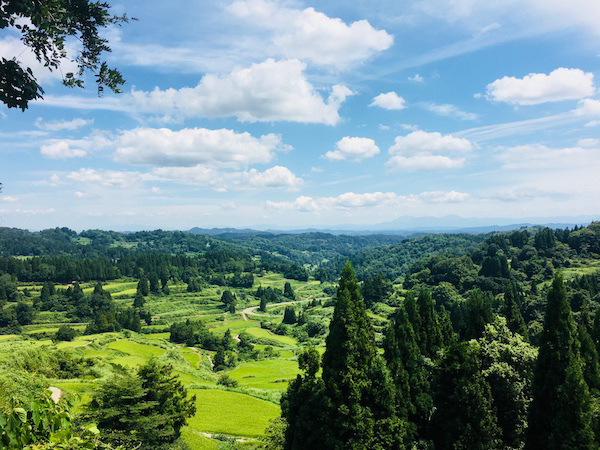 Viewed from this tower Terraced Rice Paddies is partially hidden behind the cryptomeria forest on the righthand side.
But then, this is another fresh image of the paddies from a unique angle.
Both towers are located close by, so why not try both to enjoy a set of two images of Terraced Rice paddies of Hoshi Tōge.

Fresh greens bud fast out as if life breathes its first breath – springtime.
The snow country has survived a lengthy winter into a season of newborn powers of Nature – springtime. 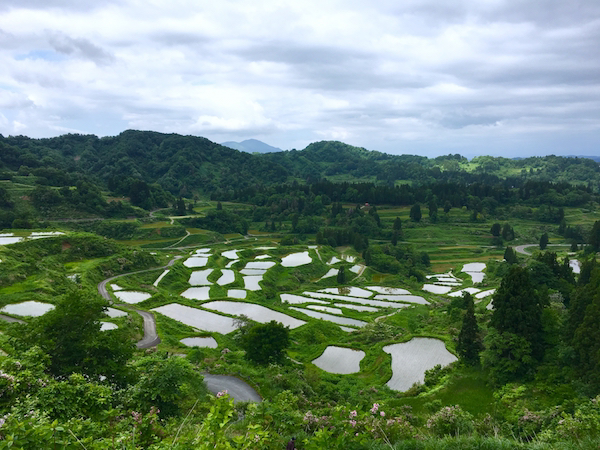 And the most charming of all at Hoshi Tōge in spring is Mizukagami, a grand plate of water mirror on the surface of the terraced rice paddies.
Nearby sceneries reflect from, say, sometime in May, right before transplanting, on the glassy paddies filled with snow-melt water.
This, I must say, is so moony and fantastic! 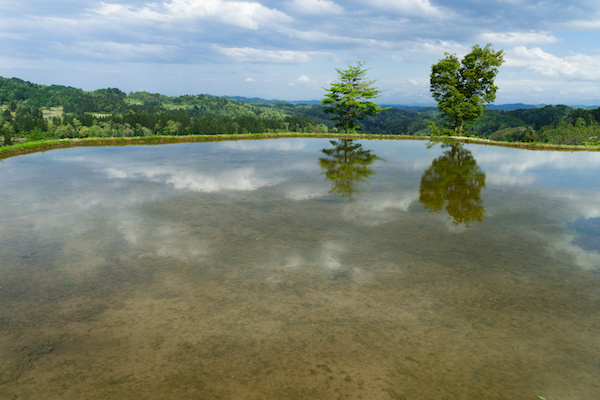 Mizukagami is most dramatically observed from late March after thaw through late June before transplanting.
The paths still have snow here and there to hinder access; so, I would say late April and thereafter is the best time for agreeable photography.
The sceneries of Hoshi Tōge are faced eastward,
so that you’ll be luckier finding fine moments for catching some awesome images of Mizukagami at sunrise – the mirror and the sun on the double. 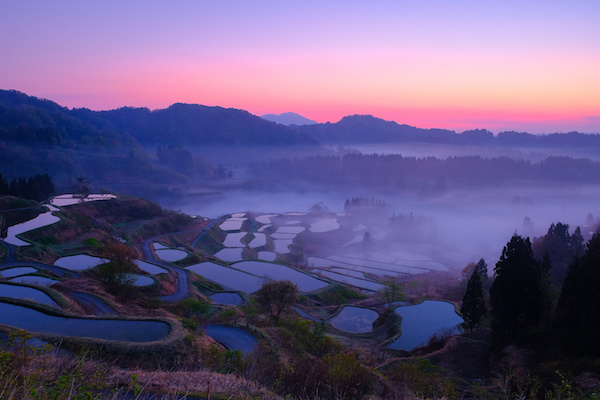 Summer is of course a season of lots of blues and greens up in the sky, hills and the rice paddy fields.
Here at Hoshi Tōge you can have all of that at once – a truly nostalgic Japanese summer.

By courtesy of (General Corporate Judicial Person) Tokamachi Tourist Association
Seedlings are full-grown, young greens and fresh air all around, summer breeze blowing across the rice paddies and up the hillside.
Well, it’s one great frame of summery sight. 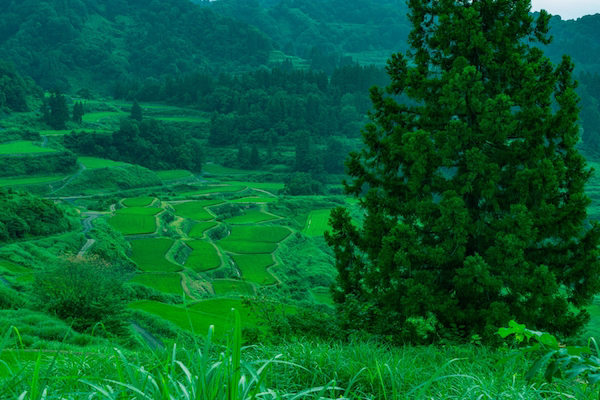 By courtesy of: (General Corporate Judicial Person) Tokamachi Tourist Association
You can enjoy overlooking the gorgeous view of full-grown rice fields all over the terraced rice paddies anytime through the early and middle of September.
(Harvesting already starts in mid-September in some areas.)

By courtesy of: (General Corporate Judicial Person) Tokamachi Tourist Association
In mid-September and thereafter,
you can witness what they call Hazakake (or Hazekake) or hanging the harvested rice plants on the shelves built in the middle of the rice fields.

By courtesy of: (General Corporate Judicial Person) Tokamachi Tourist Association
In the latter part of October,
the terraced rice paddies, once again water-filled all over after harvesting, have the much-awaited moment of a grand water mirror, Mizukagami, the visitors from all parts of Japan flood in to enjoy.
Vegetation around the paddies changes in color, the air preluding the coming of winter deep in the mountain.
Mizukagami with the autumn sky reflecting thereupon is one dandy sight you should forever miss. 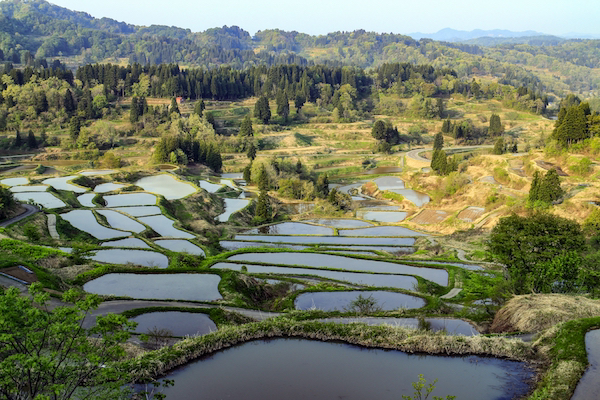 In mid-November, you may, if lucky, notice snowfall on the terraced rice paddies still water-filled.
The first snow might fall sometime in November, the pathways rather being slippery and snow tires a must.
Lest you should face any sign of haphazard, do check with the local tourist office in advance as to road/weather conditions.
Beware now that winter closes everything down due to snowfall, the paddies completely covered under snow – no Mizukagami, even the overall scenery around the paddies. 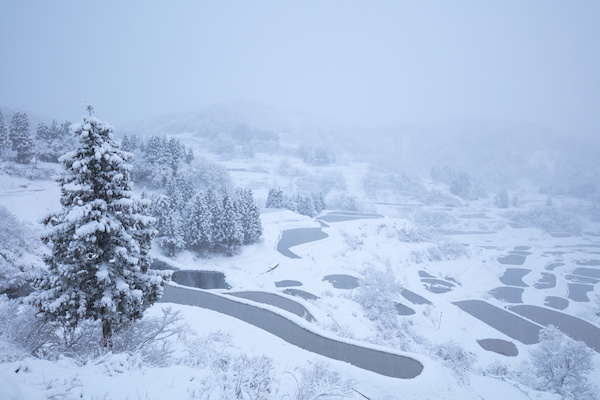 The area is well-known for the heaviest of snows;
it starts snowing in full scale to bury the entire area of Terraced Rice Paddies of Hoshi Tōge for good.
Remember, the drama is closed, pending the thaw in spring.
・Parking lots are closed from mid-November through late April.
・Snowfall registers as deep as 3-4 meters in mid-winter.

Equally fantastic is the terraced rice paddies under the stars-lit sky and early in the morning. 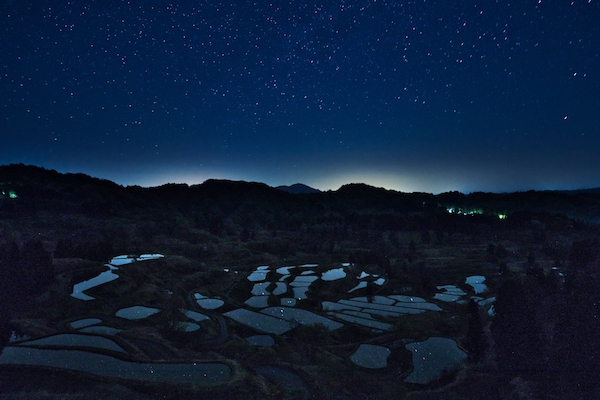 No streetlight in sight, the night sky turns a breath-taking theater of a countless number of stars.
Guess how those stars reflect on Mizukagami as if “falling” fancifully thereupon.
The absence of street lights can be hazardous, though.
There have been, mark you, two car falling accidents.
So, don‘t you dare drive without the lights on.
Hoshi Tōge I early morning is quite a fantasy, particularly after the rain is let up.
All conditions met, you can even chance to see a gorgeous sea of clouds. 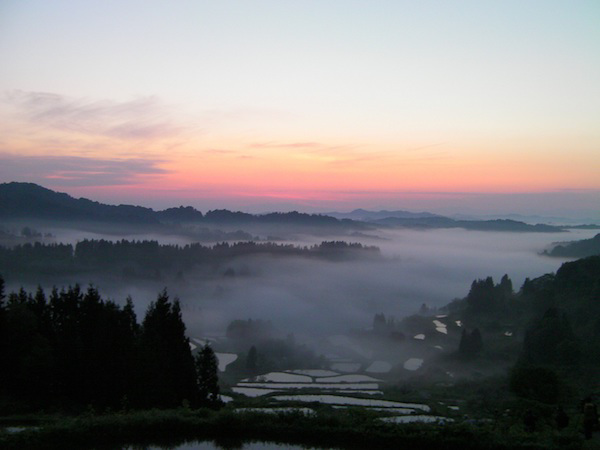 The rice paddies are not a sightseeing site but the private property of farmers, who, more often than not, complain over the increasing number of visitors.
So, do observe the below-listed points on touring the area and taking photographs.
・The area surrounding the terraced rice paddies is an entirely private property; do be sure not to leave trash behind;
・Do not take photographs of the famers at work without permission; never step onto the paths around the paddies, much less into the paddies.
(Using a tripod is entirely out of the question.)
・Do not pick wild vegetable and flowers, much less cultivated vegetables;
・Do not let out loud voices;
・On encountering local people, do greet them in passing.
Please bear in mind that the paddies are kept as they are, because the owner farmers are running their business farming day to day.
Do pay respect to the locality and abide by public manners.
Terraced Rice Paddies at Hoshi Tōge or Star Ridge have seasonal features.
There’s that natural landscape unique to Japan woven out of years of Japanese life based on rice-harvesting culture.
Here in Niigata, you can feel live what that is like, through an impressive image of the terraced rice paddies.
If and when you ever visit Niigata, do spare a moment to stretch your legs to Hoshi Tōge to see with your own eyes the grand terraced rice paddies and Mizukagami!